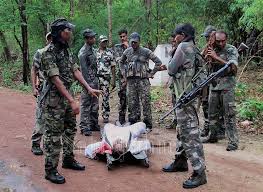 Prime Minister of India, Dr Manmohan Singh, has stated in most unambiguous terms that Maoism and Naxalism, two sides of the same coin, pose the biggest challenge to the country’s internal security. It is also common knowledge that even though Shivraj Patil resigned as Union Home Minister in the aftermath of the 26/11 terror attack in Mumbai, a big reason for his ouster was his inability to come to grips with the Naxal problem. He chose to remain in a denial mode, quite contrary to what the Prime Minister felt and, more importantly, what was required to be done to reverse an internal security situation that was getting quite out of hand.

P Chidambaram, as Union Home Minister, gave maximum attention to the Naxal issue, yet there were some incidents of Naxal initiated violence that led to unprecedented losses to security forces and dented his credibility.  The May, 25, 2013, Naxal attack at Bastar region of Chhatisgarh on  a convoy of vehicles carrying political leaders and activists belonging to the Indian National Congress led to the death of 30 persons including some senior leaders of the party. The incident has reignited the debate on the Naxal challenge. As is usual, there are as many opinions as there are voices; sadly, most of them are not in sync with the reality on ground, they look to be chasing a mirage with a belief that good words and noble acts alone will get back to the mainstream a cadre that is committed to wresting of State power by force.

The debate on the Naxal challenge, after all these years, does not seem to have progressed beyond identification of the glossary of terms. We are still wrestling to understand whether Naxalism in a political movement or left wing extremism or an insurgency or militancy or any anything else that an armchair intellectual can come up with to prove that he is different. It is this discomfort with terminology that creates ambiguity with regard to the policy that should be put in place to deal with the problem.

What, one may ask, is coming in the way of defining the Naxals and the Maoists as “Terrorists” and the groups that they have formed as “Terrorist Organisations?” Post 9/11 this is the most accepted international terminology for all such non state actors that look at violence as a political tool; the US has designated Al Queda as foreign terrorist organisation, notwithstanding the latter’s pretensions of being a militant Islamist organisation for strict interpretation of the Sharia law. The operations against Al Queda and all similar organisations, mainly in Pakistan and Afghanistan, have been clubbed under a single simple definition – the global war against terror. Nearer home, the Sri Lanka government never considered LTTE to be anything more than a terrorist organisation. What comes in the way of India being thus unambiguous?

In order to put in place an effective policy to counter the threats posed to the security of the Nation its security forces need to be very clear about their operational responsibility; they cannot be kept vacillating between counter insurgency, counter militancy, countering left wing extremism etc. If they are told, in no uncertain terms, that they are countering terrorism and those whom they are expected to neutralise are proclaimed national offenders, their job will become that much easier. This will also resolve all legal tangles.

We need to get rid of the constant identification of our areas as infested with some kind of an ideology. The proclivity to mark maps with red, green and a myriad of other colours should be done away with. No more romance of a “Red Corridor” where a defined segment of ideologically driven, misguided citizens of the Indian nation hold sway. In India, only principles of freedom, democracy and rule of law as enshrined in the Constitution are sacrosanct, none other can be considered as a possible replacement.  Wherever there is presence of a terrorist organisation or a number of terrorist organisations the State will go after them with all its might and not relent till such time that they are totally eradicated. The extent of the area does not matter; the presence may be in small or large swathes of real estate or the entire nation for that matter, it is the eradication of the menace that is important.

The aspect of development is being cloaked in many high sounding words; two pronged strategy, winning hearts and minds, development-led solutions, dialogue and peace negotiations etc. Development and security both are mandated responsibilities of the government and there is no need to give them any other meaning; they have to run in tandem across the country without exception and more so in underdeveloped, terror infested areas this does not need a separate definition of a different policy. An elected government is expected to utilise tax payer’s money in a manner that brings about development of all segments of society. It should not be cloaking its duty in high sounding words.

No leverage must be allowed in building credibility of the Maoist movement where none exists. Nothing should come in the way of India’s efforts to tackle a law and order problem cloaked in a false ideological blanket. All those who kill innocents are criminals and terrorists and they have to be dealt with the due process of law. If capacity of law enforcing agencies has to be increased it should be done, where assistance of the country’s armed forces is called for it should be requisitioned without delay, be it in training, augmentation of force levels in an operation or anything else. One needs to stay conscious of the terrorist doctrine that inability of the political leadership to think decisively can be exploited by intelligent propaganda to an extent that negates decision making; this doctrine should not be allowed to gain a firm footing