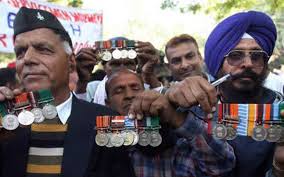 The Indian army, not too far back, had a great tradition of families serving the organisation for generations on end. In fact, there used to be no house in many villages of the martial communities that did not have at least one person in the Army. All ranks from a Sepoy to a General were covered from among the clansmen and kin among many communities.

This happy situation went on for a few decades after independence before the erosion set in. The new generation simply turned its face from the armed forces. The boys looked for jobs in other sectors; the girls looked for matches outside the force. It was quite evident that the children were dissatisfied with the lives of their parents and had decided to move on.

The last nail in the coffin, so far as this erosion is concerned, has now been put by the response of the Government of India to the demand of One Rank One Pension (OROP) being made by the veteran (retired) soldiers of the armed forces.

The prevailing sentiment has been expressed most aptly by a veteran who is a part of the agitation and whose son has opted for a career out of the army thus breaking a century of family tradition. “Had my son been serving in the army he would not have been able to tolerate seeing me languishing in filthy Jantar Mantar, New Delhi in the middle of the summer to demand from the government a pittance in the form of OROP. He would have been left with no option but to resign from service.  It is all for the better that he did not join the army.”

Whatever credibility the forces had is being lost due to this debilitating face off. The onus falls directly on the political leadership. The politicians brazenly exploited the soldiers as election assets. The simple demand of OROP was accepted by the political class across the board as justifiable. Now it has become clear that it was simply one of the many promises made during the elections which was never intended to be implemented. Even if the Congress had come to power the result would have been the same.

The way things are moving, the original demand of OROP is in danger of being overwhelmed by a larger issue concerning the position of the soldiering community within the political and social fabric of the Nation.  The extra few thousands that the OROP will give to the retired soldiers are now irrelevant in the face of the looming threat to national security.

In case the community of soldiers backs off now, it will lose its place of respect in the national mainstream for all times to come. Unscrupulous forces will ride rough shod over the soldiers in the future and exploit them to the hilt. With time the organisation will lose its self-esteem and confidence with disastrous consequences to the nation.

Earlier there were many retired soldiers who were not a part in the OROP movement.  At this stage, when an unconcerned nation looks on while the veteran soldiers, once proud and honourable, suffer unprecedented humiliation, it has become impossible to remain aloof and unconcerned.

This columnist is one among the late entrants in the fray and this piece is an offshoot of joining the agitation. The reason is not a desire for more pension; it is the larger issue of a promise broken and a revered community debased for petty political gains.

The veteran soldiers are now realising the wisdom of the younger generation that shed their tradition to move with the times and look for jobs outside the defence services. They now feel that their children were more practical and intelligent. The children knew full well that the military service would not allow them to attain their true potential in independent, democratic India. This is a sad day for the nation.

The serving soldiers are also keeping a keen eye on the proceedings; among them there is a predominance of first generation soldiers who have joined the force as a profession. They are watching the development with keen interest since it will affect their future also. It can only be hoped that the Nation will not have to pay a heavy price for its indifference.

Historically, it has been proved that a nation cannot maintain a position of dominance without adequate military power. Seeing the European countries today it would be difficult to visualise that, not too long ago, they collectively ruled the world. Today, within the world community they lack respect because they do not have the requisite military might.

The countries that have an aspiration to dominate world affairs are concentrating as much on building of military muscle as on economic power. The rise of the Chinese military machine is a true example of this fact.

It is imperative to focus on the reality, however brutal. The sadistic, egoistic pleasure that some segments of the Indian society are getting from the discomfiture of the veteran soldiers does not acknowledge the danger being posed to the Nation.This OROP face off is a classic case of being “penny wise, pound foolish.” One can only hope that good sense will prevail before it is too late.