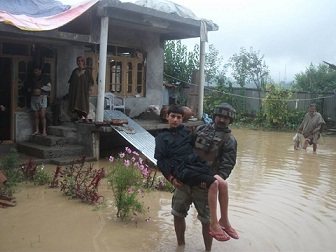 The state of Jammu and Kashmir is grappling with the worst floods in the past five/six decades. Preliminary reports place the death toll at two hundred; the actual may be much more. Lakhs have remained marooned over many days and thousands have been left homeless. No doubt the tragedy is of mammoth proportions.

The primary thought goes to those who have been caught in the throes of this tragedy; their helplessness against the havoc that the disaster has wreaked on their lives. One cannot help but lament their pitiable state as they witness their homes being washed away, the loss of their dear ones, their own fight for survival as the ogres of hunger, cold, disease and ruined lives haunt them.

One wonders where the inestimable Mr. Syed Ali Shah Geelani and his gang of so–called separatist leaders have disappeared.  Are they not self proclaimed true voices of Kashmir? Are they not the torch bearers of the Kashmiri struggle and custodians of Kashmiriyat? Why are they silent today? Why are they not out in the streets with their cadre supervising relief work or at least standing by with those who follow them in their incessant stone pelting? Surely some of the money that they profess to collect from the people of Kashmir as Zakat (donation) for their cause of “independence” can be diverted for the good of the people under such testing circumstances. It would be great to see Syed Geelani giving even a biscuit to a child. It would be a welcome change from the incessant demands that he makes all the time.

The state administration that holds primary responsibility for dealing with the situation is, by itself, in a state of shock. It has been caught off-guard. Busy in playing out local politics it has not paid attention to issues such as disaster management. It is the people who are now suffering the brunt of its ineptness.

Take the instance of the bus swept away in a flash flood in Nowshera, Rajouri. The loss of human life in this single incident is feared to be seventy. While the locals looked on helpless and the trapped passengers prayed for relief, the civil administration arrived some four hours after the incident was reported.

Compare this with the manner in which the army has responded. It was the first to reach the spot and carry out rescue operation despite the inclement weather, the incessant rain and the swirling waters. Army soldiers pulled out the submerged vehicle and saved a few lives. This was simply a harbinger of many more horrific stories to come by where the onus of action and reaction fell only on the resolute army soldiers.

Being sensitive to the magnitude of the tragedy as it unfolded the Army did not wait for the necessary sanction to give aid to civil authority. Within hours of the situation developing, the army had unilaterally launched Operation Megh Raahat to provide relief to the people across the state starting from Poonch where the tragedy first struck. It went into rescue mode immediately and without any fanfare. As the land got enveloped in a disaster of epic proportion the Army has been the torch bearer around which the rescue and relief operation is being carried out. Undoubtedly, many more agencies including the Air Force, disaster management authority and paramilitary forces are putting in a herculean effort. The state government, led by the chief minister himself, is doing what it can to the very best of its ability. It is, however, the army which is generating hope and confidence amongst the marooned people and that despite having suffered considerable losses.

The statements issued and actions taken by leaders of the community, state and nation at such times reflect their honesty of purpose and their effectiveness. Prime Minister Narender Modi, in this context, has shown that he is a true statesmen and leader. He visited the flood affected areas on ground as opposed to an aerial survey as is the normal practice; he termed it as a natural disaster and expressed unmitigated solidarity with the people of Kashmir. He offered all possible help to our neighbours who are also caught in this tragedy, despite the fact that not even ten days ago they were shelling our posts and our people. He followed his words with action by offering a more than generous relief package to the State and placing the entire machinery of the central government at the disposal of the relief effort.

The Army Chief, General Dalbir Singh Suhag, has been literally camping in Kashmir to motivate his men into giving their best. A man of few words and lots of action he is not giving statements from Delhi but is engrossed with the situation on ground.

As the glorious rescue and relief efforts are underway the separatists may well be busy conferring with their masters across the border about ways and means to malign the government of India and the Indian army even in this situation. One would not be surprised if the Hurriyat has a hand in instigating people to attack and curse the rescuers as has been reported.  The leaders may even have relocated to their plush and safe bungalows in Delhi to return only once the rehabilitation process is complete and voice their own negative assessments.

This is not the time for recriminations; it is the time to work together to save human lives. Chief Minister Omar Abdullah is doing what he can and that too with utmost honesty. He and his government can be questioned about the failures later; now is the time to stand by him, assist him and motivate him. Do the separatist have the courage to move on this path? Will Syed Geelani and Mirwaiz Umar Farooq please respond to this?