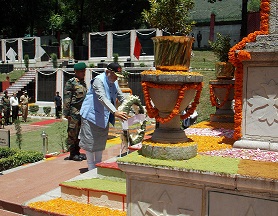 Prime Minister Narendra Modi’s maiden visit to Jammu and Kashmir has generated a fair amount of interest and speculation as was expected. The Prime Minister went to the state specifically for inauguration of the Katra-Udhampur rail link and a 240 megawatt hydro-power project in Uri, Kashmir valley, which has been built by the National Hydroelectric Power Corporation. Also on the schedule of the Prime Minister was a visit to the Badami Bagh cantonment at Srinagar where the Headquarter of 15 Corps of the Indian army, also known as the Chinar Corps, is located. The Kashmir valley constitutes the area of responsibility of the Chinar Corps.

By embarking on a visit to the sensitive state so early in his tenure and before even the first session of parliament, Prime Minister Modi has demonstrated his intention to stay engaged with the region and its issues at a personal level.

The traditional road blocks to the visit were in place. The Hurriyat Conference called for and implemented a complete Bandh (lockout) in the Kashmir valley. Pakistan came up with its usual frustrated statements while heating up the line of control with cease fire violations and infiltration attempts.

The visit of the Prime Minister to Badami Bagh cantonment also came up for much conjecture. That the Prime Minister would be holding a security meeting without presence of the Chief Minister was subject to vigorous discussion. Sadly, the main point was missed out altogether; Prime Minister Modi intended only to meet with the soldiers who are doing a tremendous job in securing the country in the sensitive frontier state. He also wished to pay a tribute to those who have laid down their lives in pursuit of this noble effort. This was possible only within the cantonment; the main functions, therefore, were the Sainik Sammelan, the interaction with the soldiers and the wreath laying at the war memorial. The much talked about security brief could have been held at any time in New Delhi also.

The Prime Ministers intention becomes quite evident from the words he spoke; he praised the valour and courage of the Indian soldiers. He asserted the need for self reliance in defence and modernisation of the defence forces for security (Aatma-raksha) of the nation. He spoke about the entire nation, not just Jammu and Kashmir. His tweet, “Addressed Army Jawans in Srinagar. Their courage, valour and sacrifice is an inspiration for every Indian & fills our hearts with pride,” says it all.

It is very heartening to see a Prime Minister in India making a special effort to interact with and build the morale of the soldiers, the focus from this emotional and sensitive act should not be diluted.

It was quite interesting to note the curtain raisers to the visit by Pakistan media. Hurriyat leader Mirwaiz Umar Farooq gave an exhaustive interview to the Indian newspaper “The Hindu” that was uploaded on July, 4, 11.39 IST. Excerpts of the interview that suited Pakistan were picked up by Pakistani newspapers immediately. The Mirwaiz had said so many things in his interview but the Pakistani newspapers quoted only such portions that suited the country. “A positive start has been made with Pakistan. But there has to be a serious effort to address the Delhi-Srinagar trust deficit and take a holistic approach,” Mirwaiz is quoted to have said as reported by a Pakistani newspaper, Daily Times. What does this imply? It implies that Pakistan should be centre stage in removing the trust deficit between India and the Kashmir valley. Can it get more ludicrous than this? The newspaper goes on to speak of a “hostile welcome” to the Prime Minister from a “general strike”. A lot more about the visit, on the same lines, will be written in Pakistan in days to come.

This apart, Pakistan could not resist giving an official sheen to its machinations; “We do not accept the so-called accession of the state of Jammu and Kashmir to India. Kashmir is not an integral part of India. Our position is that Jammu and Kashmir is a disputed territory,” said a Pakistani foreign office spokesperson Tasnim Aslam on the eve of the visit. One can only advise the government of Pakistan to concentrate more on North Waziristan where its army is adding to its many blunders in handling national security both internal and external.

Would somebody also suggest to the Hurriyat that by greeting a new Prime Minister on his first visit to the Kashmir valley with a Bandh they are not exactly exhibiting the famed Kashmiri hospitality or creating an atmosphere where the so-called trust deficit can be reduced! Narendra Modi has made no political statement and Hurriyat is already at its defensive best; by maintaining sullen egos the Hurriyat has lost out on many opportunities in the past, it is doing the same again.

It is quite evident that Prime Minister Modi went to the state with an intention to reach out to the people. That he was singularly successful can be gauged from the message of hope that he has left behind. The eagerly awaited statements on Article 370, AFSPA, Indo-Pakistan relations were left for another day much to the disappointment of many sensationalists in the political and the media arena. He spoke only of a dream of happiness and prosperity that would translate into winning the hearts of the people.

“Today, I am also starting my developmental campaign (for the country) with Mata Vaishno Devi’s blessings from the same place. This is a significant development and an important day as it will usher in a new revolution of development for Jammu and Kashmir and whole of India,” Modi said. “The railway line brings Maa Vaishno Devi closer to her devotees. People of India will gain immensely from this,” Modi tweeted. In one stroke he converted his visit, the holy Mata Vaishno Devi Shrine and the railway line into a bond between Jammu and Kashmir and the rest of the country. One can only hope that the message of Prime Minister Modi’s progressive, people centric agenda for Jammu and Kashmir would have has gone out crystal clear to one and all.