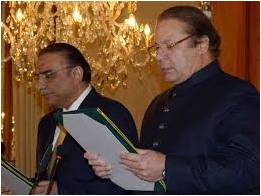 Nawaz Sharif is finally on the hot seat; this comes as quite a relief because the Indian media went irritatingly overboard with his election, selection and anointment. One wonders at such exuberance for a country which, as things stand, is quite inimical towards us. With the euphoria over, it is time to look at the situation logically. There is no point in worrying about how Nawaz will deal with the mountain of problems that beset his land. Pakistan’s failing economy, terrorism, army domination, sectarianism are all his problems and he should be left alone to deal with them. India must refrain from taking a childish delight at his woes or a supercilious attitude towards his trials and tribulations. Beyond this there is a need to stay tuned with such issues that are likely to impact India directly. In this the state of Jammu and Kashmir takes priority because whatever happens will start from there. Jammu and Kashmir will also pose the biggest challenge in bilateral dialogues between the two countries as it has since the partition of the sub-continent.

Nawaz Shariff has categorically stated that he will not allow export of terror from Pakistan to India. There is no reason to believe that he is not sincere. At the same time, caution would be advised because many Pakistani leaders before him have made similar promises that they have not been able to keep. At the end of it all, they quote a plethora of reasons for their failure and insist that things were beyond their control. Whether this “beyond control” line is a calibrated response or actual is something that cannot be correctly fathomed.

Pakistani leaders also have a proclivity to say that rapprochement between the two countries was around the corner just when they go out of power. The late Benazir Bhutto said so, Nawaz himself said so after he was deposed, Musharraf said so and recently the ex-Foreign Minister of Pakistan, Hina Rabbani Khar said that most favoured nation status for India was round the corner when the beheading of two soldiers took place and derailed the process. Pray why did the barbaric beheading take place in the first place? The fact remains that on many occasions Pakistan has missed opportunities for peace.

The crunch lies in export of terror from Pakistan to Jammu and Kashmir and onwards to the rest of India. It is common knowledge that there are well established organisations like the LeT, JeM etc that are involved in this evil activity. A few days back, on June, 07, after Nawaz Sharif had taken over as Prime Minster, Pakistan Taliban accused LeT and another militant set up, Ansarul Islam, of planning massive attacks on its bases in Mohmand region. LeT was quick to clarify that its focus is only on what it calls “Indian held Kashmir”. This news was carried by an eminent Pakistani newspaper, The Express Tribune, on June, 08, 2013. Does this leave any doubt about the policy of the militant organisations operating from Pakistan? Also, does this not give Nawaz Sharif enough reason to crack down on LeT? Yet, nothing has happened. In case he does not know, LeT headquarters are based in Muridke, Pakistan.

Pakistan Army Chief General Kayani has had a number of closed door meetings with Nawaz Sharif before the latter took over and immediately after his taking over. In India, the Army Chief would be lucky to have a single one to one meeting with the Prime Minister in his entire tenure, such is the difference between the two countries. Nawaz and General Kayani definitely would not have exchanged niceties and talked about the weather in these interactions. General Kayani, in all probability, spelled out the Army’s policy with respect to Afghanistan and India and ensured that Nawaz was on the same page before giving a go ahead for his anointment. Being a soldier first, his policy that would obviously have a distinct military bias and would factor the Inter Services Intelligence (ISI) of which he has been a boss and on whose machinations he is quite dependent when it comes to the two neighbouring countries. This may be the reason that Nawaz has not been able to put a lid on Pakistan firing across the line of control or infiltration bids as a first step towards his promised policy of not exporting terror to India.

Nawaz has been absolutely quiet about Pakistan Occupied Kashmir and Gilgit-Baltistan. The Indian journalists who covered the swearing in and got exclusive interviews with Nawaz also did not raise this issue; the occupation, the illegal leasing of territory to China, the killing, the colonisation, the victimising of the ethnically different Shia population, nothing came up for discussion. Here lies a major fault line in Indian policy. We have psychologically forsaken our lands and our people. By so doing we have climbed down from the moral threshold that forms the fulcrum of the dispute. Nawaz realises the weakness in Indian diplomacy and has chosen to ride the wave of ambiguity instead of coming out with a righteous action plan to ameliorate the suffering of the beleaguered people. It is evident that Nawaz is not as full of new found virtue as he would like the world to believe.

India needs to set out a mature and serious agenda with the new government in Pakistan. Our enthusiasm should not extend to looking for a magic wand that Mian Nawaz will wave and everything will be hunky-dory. In fact, if one goes by history, India needs to remain over vigilant to guard against something exactly opposite happening. Mumbai during the first truncated tenure of Nawaz Sharif as Prime Minister and Kargil during the second cannot and should not be easily forgotten. It would be foolish to expect anything better till such time that improvement is seen on ground. If Pakistan is sincere India will get to know soon enough, till then, it would be best to wait and watch while staying absolutely vigilant.