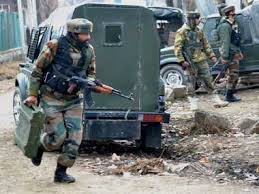 The Indian army convened a General Court Martial (GCM) to try five Indian soldiers, including two officers, on charges of conducting a fake encounter in the Machil sector of the Kashmir valley in the year 2010. The GCM has recently found the soldiers guilty and has awarded to them life imprisonment. The soldiers have been in custody since the proceedings were convened and will start serving their sentence as soon as the verdict is ratified by the due process of law.

What stands out in this case is the quick and humane response of the army authorities to meet ends of justice. The Army authorities have responded to a situation of criminal indiscipline is a very firm and time bound manner and have awarded the harshest punishment to the accused.

In April 2010, a Rashtriya Rifles unit of the Indian army deployed in Machil sector of the Kashmir valley reported the killing of three militants in an encounter. It later emerged that the youth were innocent civilians who had been lured into the army fold by their own kith and kin with the promise of a job and then killed. Their bodies were later exhumed and prima facie a case of criminal fake encounter was established.

The army set in motion a process of inquiry within a few months of the incident taking place and by 2013 it was deemed to be a fit case for convening of a GCM. Accordingly, the accused were charge sheeted and tried by a military court in the Kashmir valley itself; GCM proceeding commenced in December 2013 and the verdict has come by in less than a year.

There are a few aspects that stand out in this case. First, the Indian army despite functioning under the protection of the Armed Forces Special Powers Act (AFSPA) does not countenance any act of indiscipline by its soldiers. Second, justice meted out by the army through its internal mechanism is quick and exemplary; had this case been tried in a civil court it would have dragged on for years on end. In this instance the matter has gone from the initial phase of recording a summary of evidence to convening of a GCM within a short period of three years and the final verdict through a GCM has come within one year.

This is not the first instance where the army has punished its soldiers for indiscipline and misbehaviour. There is a human rights cell in all army headquarters from the Division level upwards. This cell takes cognizance of all cases of human rights violations that are reported by the state human rights commission or any other body and immediate inquiries are instituted. Cases that come to light within the service itself are also subject to an inquiry. Such cases that deem legal action are dealt in accordance with the stringent provisions of the Army Act 1950. A sizeable number of soldiers have been meted out exemplary punishment in the form of dismissal from service and imprisonment in earlier instances in the state of Jammu and Kashmir itself.

Apart from acting strongly against all cases of indiscipline, the army has instituted processes that ensure minimum damage. Yet, the unfortunate reality is that the conduct of counter terrorist operations against a vicious and well trained enemy has its own set of challenges; collateral damage can be reduced but it cannot be avoided in totality. The challenge lies in protecting the soldier is cases of professional expediency and meting out exemplary punishment in instances of dereliction and even worse – outright criminality.

What the convicted soldiers have done in Machil is inexcusable; they have brought shame to the good name of their organisation, their families and their nation. It cannot be denied that the violent conditions under which the army operates in Kashmir do bring out the devil in some of the soldiers as has happened in this instance. Such cases, however, are an exception rather than a rule. Overall the Indian soldiers are God fearing family men who take a great pride in their personal honour, the honour of the noble profession of arms and the honour of their country.

The punishment meted out to the soldiers has reaffirmed the commitment of the Indian army to humanity and justice. Not many military organisations operating under similar conditions stand up thus to admit their mistakes. The manner in which the US forces have used weapons of mass destruction with impunity in Iraq and Afghanistan bears testimony to this fact. Nearer home in Pakistan, the entire North Waziristan has been cleared of civilians and its towns have been razed to the ground simply to target a few militants. These constitute human rights violations of an unacceptable degree and this is something that the Indian army has never done.

The humane response of the army has put paid to the false propaganda that some vested interests spread to discredit the force and the Indian government. The Chief Minister of Jammu and Kashmir, Omar Abdullah, has welcomed the decision and said that it would reestablish faith of the people in the security forces and the institution of the state. Even organisations like Amnesty International have a good word to say about the proceedings. The families of the innocent civilians who lost their lives have expressed happiness at the prospect of their sons getting justice.

The manner in which the army has responded in the Machil incident will send out a clear message to its rank and file that un-soldier like behavior will not go unpunished. Thus, the chances of something of this nature happening and then going unnoticed are very remote indeed. Be that as it may, it is also time for the army to learn a lesson from the incident and further strengthen its policies towards zero tolerance to human right violations in all situations of counter terrorism and counter insurgency.