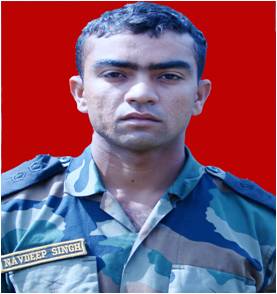 The 63rd Republic Day celebrations at Rajpath will commence with the Nation’s highest peacetime Gallantry award, ‘Ashok Chakra’ being conferred posthumously to Lieutenant Navdeep Singh of the Indian Army by the Honourable President, Smt Pratibha Devisingh Patil, on behalf of a grateful Nation.

Lieutenant Navdeep Singh, unhesitatingly sacrificed his young life in the service of the Nation, on 20th August 2011, in a fierce anti-infiltration operations on the Line of Control, in the remote Gurez Sector of North Kashmir. Lieutenant Navdeep, a third generation soldier and an alumnus of the Officers Training Academy, Chennai, was commissioned on 19th March 2011. A born leader, Navdeep’s intrinsic talent and raw fighting spirit soon shone through with his Battalion entrusting him with the coveted leadership of its crack Commando Platoon, which he trained and honed into a superbly fit fighting unit. Raring to go and seeking challenges at every step, Navdeep was deployed with his crack team to destroy infiltration attempts by hardcore terrorists from across the Line of Control.

On the fateful night of 19th August 2011, Lieutenant Navdeep Singh and his Commando Platoon were deployed in the Kanzalwan Sub Sector in response to intelligence inputs about a desperate bid by a large group of highly trained terrorists, fully equipped and armed to the teeth with deadly weapons. Leading from the front and demonstrating the highest standards of tactical acumen, field craft and fire control, this brave heart quickly sited his ambush, correctly appreciating the path that the terrorists would adopt. In a display of sheer unbridled courage coupled with steely grit, Navdeep allowed the unsuspecting terrorists to walk into his trap. Springing his ambush at the last moment, Navdeep singlehandedly engaged and eliminated three hardcore terrorists from close range. Despite being hit and severely injured in the violent return fire, Navdeep, continued to control the encounter, marshalling his resources with cool presence of mind. Living upto the highest military ideals, despite being grievously injured, he saved the life of his buddy while gunning down a fourth terrorist, before eventually succumbing to his injuries. His gallant action resulted in his team eliminating twelve hardcore terrorists in one of the fiercest encounters on the Line of Control, dealing a crippling body blow to the terrorist groups.

The Nation and the Armed Forces fraternity stands as one to salute this young Lion, as his outstanding deed of courage is proudly acknowledged. Honorary Captain (Retired) Joginder Singh, his proud father will receive the ASHOK CHAKRA, on Late Lieutenant Navdeep’s behalf, with fierce pride and aplomb, representing his entire family. An accomplished veteran Bengal Sapper with distinguished service following in the footsteps of Navdeep’s grandfather who served in 8 SIKH, Honorary Captain (Retired) Joginder Singh, will represent a very proud set of relatives, friends and fellow brothers in Uniform, many with a wistful tear and a prayer of resolve, as he steps up to the dais amidst thunderous applause. Navdeep’s mother, Mrs Jagtinder Kaur, the fountainhead of pride, courage and strong sense of values that run through the family and fully epitomized by her favourite son, will solemnly accept this ultimate Honour, with a silent prayer on her lips. Lieutenant Navdeep’s younger brother, Sandeep, an aspiring Engineer and his doting sister, Navjot Kaur, both unabashedly proud of his achievements, stand tall with a firm resolve clearly reflecting the ‘go getter’ spirit all pervasive in the family. Lt Navdeep Singh has set the most profound example for the youth of the Nation to follow.