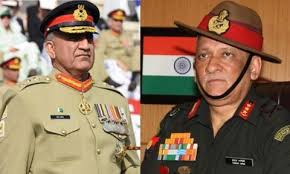 The chief of the Indian Army, General Bipin Rawat, recently made a significant statement on Jammu and Kashmir, wherein, he rooted for peace as the only way to improve the situation in the state, especially so, in the Kashmir Valley. “There are some youths in Kashmir who have strayed and have been radicalised. They think they can achieve their goal through guns. But the time is not far when even they will be convinced that neither the forces nor the militants will be able to achieve their goal,” he said in an attempt to reach out to the Kashmir youth who are falling prey to propagandist indoctrination by Pakistan sponsored forces operating in the region.

It takes a lot for a soldier, especially a General and a chief to boot, to say that the military action that his forces are conducting may not lead to the desired end result. Yet General Rawat said so in order to strengthen his appeal to the youth to shun the path of violence.

Earlier, the Pakistan Army Chief, General Qamar Javed Bajwa, had said that peaceful resolution of disputes between India and Pakistan, including Kashmir, is possible only through a dialogue.

A positive statement of this nature from the most powerful person in Pakistan would be taken by some as an indication of the much awaited thaw in relations. A deeper analysis, however, would point towards the need to read the same with caution.

General Bajwa has found success in his efforts to marginalise Nawaz Sharif who now stands banned for life from politics. He realises that India would raise apprehensions about the return of army rule in Pakistan that invariably leads to a more harsh and inflexible posture being adopted by Pakistan. The statement could well be a ploy to fend off pressure from India at this sensitive stage.

Also, in what is spoken of as the “Bajwa Doctrine,” his strategy is based on temporarily normalising relations with India in order to concentrate on the pressure that is being created by the US.

Mirwaiz Umar Farooq, the head of the separatist faction, All Party Hurriyat Conference (APHC), has also tweeted on the statements made by the two army chiefs.  “Indian Army chief admits to the futility of use of force and Pakistan army chief talks of peace through dialogue. Its time their political counterparts accede to what their chiefs have realised and resolve the #Kashmir dispute through political measures putting an end to bloodshed,” said Mirwaiz in his tweet.

The manner in which the Mirwaiz has misrepresented the statement given by the Indian Army chief by resorting to selective use of words does not behove a leader of his stature. However, beyond political expediencies, his statement indicates the realisation that violence/protest will not lead to a solution and peace would be the best way forward. Whether his many partners in the Hurriyat conglomerate and others outside of it carry his views or not needs to be seen, but his making a statement of this nature definitely constitutes a step in the positive direction.

The statements by the two chiefs and the reaction by the separatist elements in Kashmir have opened a window for political momentum and it would be in the interest of India to leverage the same.

At the outset it needs to be clearly understood that, notwithstanding the forays towards peace, counter-terrorist operations should continue to be pursued with vigour. Relaxation in this regard is feasible only when the existing terror structure in the valley is completely dismantled.

Of course, the political leadership and civil society of the state can utilise the emerging environment to wean away the misguided youth from the path of terrorism. Such an act would hasten the peace process tremendously.

The concept of Kashmiriyat can play a big role in reviving peace.  It was quite evident that even after decades of indoctrination through the use of force, foreign sponsored terrorists, their ideologues and masters have failed to break the bond that has existed between the religious communities in Kashmir since times immemorial. In the recent past, whenever Kashmir Pundits have gone back to the valley to celebrate religious functions like Kheer Bhiwani, they have been accorded a hearty welcome by their Muslim friends.

Even more poignant has been the reaction of the younger generation; school going Muslim boys and girls have been seen making special efforts to look after the visiting Kashmir pundits. Their actions proved that their parents and elders had spoken to them about the Pundits who are so close to their hearts and the children have developed affection for the uprooted community.

Kashmiriyat constitutes the unique and highly civilised culture of Kashmir which is an offshoot of visionary thinking of religious saints revered across the land by one and all. Prominent among the saints was Lal Ded. She combined Islamic and Shaivite thoughts to create a bridge between all communities. The vision of Lal Ded was carried forward by a great Sufi mystic, Sheikh Noor-ud-Din, also called Nand Rishi, whose shrine in Charar-e-Sharif is the most revered place of pilgrimage for the entire Kashmiri community including, not only the Muslims and the Pundits, but also Kashmiri Sikhs and Buddhists.

Kashmir valley is called the land of Sufis and saints because of the high number of mystics who have graced the region. All of them were secular in thought and action. In the Kashmir valley people may pray to different Gods but they also have a lot many Sufis and saints in whom they believe collectively. It is from Kashmiriyat that the contours of the new era will emerge.

“We have to together find a way for peace and we will be successful in that,” are statesmanlike words spoken by the Indian Army chief. It is hoped that they prove right and a collective effort based on the concept of Kashmiriyat breaks down the culture of the gun and brings about a new era in Jammu and Kashmir that is marked with peace and prosperity.

(Jaibans Singh is a reputed analyst and expert on Kashmir affairs)