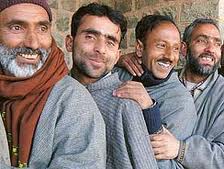 The government in the centre has been there barely two months and a segment of the so-called prime-movers of the Kashmir valley, political leaders and intelligentsia, have started voicing a litany of demands – political, economic, development, social and what not. Inimical voices from across the border have increased their vitriolic rhetoric – more stringent calls for Jihad, allegations of water terrorism against India, fermenting religious hatred and such like evil propaganda. One often wonders whether this jaundiced information campaign is a well coordinated effort with a bigger power controlling the strings!

What is being said is, of course, not the voice of the people of the Kashmir valley since those who are making statements and writing pieces are not associated with public life in any way. What does Syed Sallah-ud-din or Hafiz Saeed know about the people of Kashmir? They make statements on the basis of information fed to them by those whom they pay to say what they wish to hear. The so-called intelligentsia comprises mostly of wannabe journalists who wax eloquent on various issues but have obviously biased, one sided and motivated views. The divisive agenda of the separatists based on anarchic contradictions is, by now, well known and needs no elaboration.

Nevertheless those who point fingers and make demands should also be ready to exhibit their commitment to the people whose sentiments they profess to represent. They need to make a demonstrated personal effort.

There are harsh demands for easing the central security threshold in the Kashmir valley. One can understand the sentiment but are those making the demand doing something to bring about an environment where the threshold can be eased? If central security forces are to be removed there would be a need to have a proficient police force in place to take on the responsibility. A police force cannot be built without funds and these have to be raised by the State government. This would be possible only if the people pay their taxes with all honesty.

Those who wish to gain centre stage in Kashmir need to motivate the people to pay their taxes and assist the State government in raising a viable police force capable of dealing with law and order issues as also the remnants of terrorism. The Indian army can then get back to its main responsibility of guarding the borders and the paramilitary forces can be relieved of their onerous and largely thankless duty of assisting JK Police in internal security functions.

These people speak of Kashmir being barricaded. Whose fault is it? Who instigates people to come out in great numbers and create mayhem on the streets? When a Bandh/Hartal is called who suffers – the businessman in Delhi or the daily labourer in Kashmir? When property in damaged who loses out – the people of the Kashmir valley or the people of Tamil Nadu?

Barricading is done by security forces to save the innocent people of Kashmir from the evil, foreign sponsored machinations of a select few. Those demanding elimination of barricades should ensure that political discussions are relegated to representative talks behind closed doors, the barricades will vanish in no time. In any case Prime Minister Narendra Modi or the Corps Commander in Badami Bagh, Srinagar do not decide which street will be barricaded and which will not, it is the Chief Minister who takes the call and he is very much a Kashmiri. Only problem is that his own people are being instigated against him.

There are voices saying that the impact of development funds sent to the valley is negligible! Whose fault is it? The state government uses Article 370 to absolve itself of all accountability. The Right to Information route not followed in Kashmir to find out where the funds are going? The poor people are ignorant while the rich and mighty are in collusion; so how can the facts emerge?

Such is the opportunism of some in Kashmir that the moment the UPA government went out of power they dumped Dr. Manmohan Singh and are now busy invoking Atal Bihari Vajpayee as the patron saint of reconciliation. Undoubtedly, Shri Vajpayee did a lot but the contribution of the UPA government towards Kashmir was by no means insignificant. There is no sphere of activity in which Dr. Manmohan Singh did not extend his full support and much was achieved.

What these opportunistic favour peddlers do not understand is that Prime Minister Narendra Modi is not a political novice who will be taken in by their fatuous statements and actions. He will allow his actions to do the talking. He will put righteousness, justification and above all – India first.

It is time for the Kashmir people to realise who is for and who is against their interests. It is time for them to shed the load of the small coterie of self-centered leadership and so-called intelligentsia and take their decisions on their own.

The people of Kashmir need to stand on their own two feet, they need stop looking at Pakistan, UN, Organisation of Islamic Conference, US, Saudi Arabia and others to whom their self professed leaders go running for help and assistance; none is going to do anything for them.

The people need to strengthen roots of democracy in their state; they need to integrate with their nation and onwards with the world. They need to optimise the resources that their nation is providing for their uplift. This aid is not a favour; it is a necessity to facilitate them in getting over the troubled era of foreign sponsored terrorism; they do not need to show gratitude, they simply need to put it to good use. Above all the Kashmir people need to be vocal about what they expect from their leadership rather than the other way round. It is time for the Kashmiri community to become a master of its own destiny.