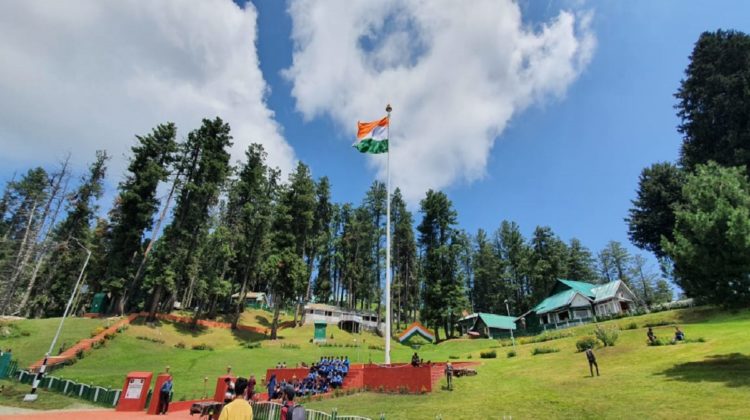 15 August, 2021, will be etched indelibly as a golden day in the history of Kashmir. On this day victory of good over evil was celebrated with great aplomb throughout the Valley. The people came out in large numbers to express their love for their country on the occasion of the 75th   Independence Day .

In an elegantly organised event, Lieutenant Governor Manoj Sinha dedicated a 100 feet high Tri-colour at Shakti Peeth, Hari Parbat, Srinagar to the indomitable spirit of J&K. The function formed part of many events organised across the Union Territory (UT) as a part of the “Azadi Ka Amrit Mahotsav.”

The idea of the 100 foot flag-post was conceptualised  by the Indian Army and completed with the support of the Flag Foundation of India, J&K Government, CRPF and the people of Kashmir. The Lieutenant Governor, on the occasion, expressed gratitude of the nation to its soldiers and remembered those who shed their blood for the cause of Jammu and Kashmir.  “I salute the brave soldiers of Army, Para Military, Jammu and Kashmir Police….. J&K’s fast-growing economy, social upliftment is the true reflection of their sheer grit and commitment,” said the Lieutenant Governor.

Earlier, from 7 August, onwards, the iconic Clock Tower in Lal Chowk was illuminated in the Tri-colour after being fitted with new clocks. A thought goes back to 1992 when two leaders of the Bharatiya Janata Party (BJP), Murli Manohar Joshi  and Narendra Modi, hoisted the national flag in Lal Chowk at great risk to their lives only to show to the world that Jammu and Kashmir was and would always remain an integral part of India; it has to be remembered that Lal Chowk has remained a hub centre of separatist, terrorist, divisive and disruptive activity. Much has changed since then.

President Ram Nath Kovind, in his address to the nation on the occasion of Independence Day said, “A new dawn is rising in Jammu and Kashmir. The government has initiated the process of consultation with all stakeholders who have faith in democracy and the rule of law…. I urge the people, especially the youth of Jammu and Kashmir to utilise this opportunity and work on realising their aspirations through democratic institutions.”

The “New Kashmir” seen during the current Independence  Day celebrations is definitely very different from the earlier Kashmir and all for good reasons.

Amidst the celebrations, it is necessary to remain conscious of the fact that the enemy leaves no opportunity to strike back in any and every way that it can. Since open attacks are no longer possible, the enemy has started resorting to cowardly, stand-off Grenade attacks. A concerted effort was made to disrupt the Independence Day functions with such Grenade attacks. On 16 August,  a CRPF soldier was injured in a terrorist initiated Grenade attack at Langate, District Handwara; two civilians were injured in another such Grenade attack in Azadgunj, Baramulla. 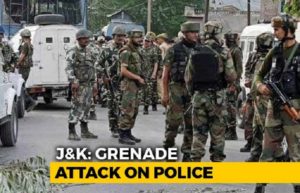 Earlier, the alert security forces were able to bust a module of Jaish-e-Mohammad (JeM) tasked to plant a vehicle-based Improvised Explosive Device (IED) on the eve of Independence Day in Jammu/Kashmir. One of the terrorists caught was from Uttar Pradesh while another named Jahangir Ahmed Bhat was a local of the UT f hailing from Bandzoo, District Pulwama, Kashmir. Bhat was also identified as a recruiter for the JeM. Another IED was defused near Kudiya, District Kishtwar and one at Poonch. During this period a terrorist killed in Kulgam was identified as a close associate of top JeM commander Abu Saifullah aka Lamboo who was recently killed in an encounter, the killed terrorist was attempting to launch a strike.

Terrorism in Kashmir is gasping for breath, not because Pakistan has shed its evil ways and machinations but because the security forces, led by the Indian Army, have made it very difficult for the scourge to continue. It is surviving due to indoctrination and recruitment, by the enemy, of a few local youth into this shameful and dishonourable path.

The government authorities, especially the security forces, are trying their best to ensure that the recruitment process is obliterated from the soil of Kashmir forever. The efforts being made include engagement with the vulnerable segment of Kashmiri youth. Despite this effort, if some boys do step on to the path of terrorism then efforts are made to get them back through appeals of loved ones and offer of lucrative surrender terms. Hundred percent success, however, has not been achieved. There is, as such, a need to introspect.

Can parents and families of terrorists be absolved of all responsibility? Should they not be ensuring that their children remain away from foreign sponsored machinations and indoctrination? Do the men folk in the house somehow push their boys towards terrorism with their constant cribs against the government and the system? Instead of speaking incessantly of what all the government and the nation are not doing, should the elders in Kashmir not be discussing ways and means to leverage the benefits being extended to the region?  Should they not be discussing Kashmir’s contribution towards the cause of the Nation? The focus should remain on making meaningful progress and not on negativity and surliness. The civil society and the families of Kashmir are well aware of the modus operandi being employed by the recruiters; surely they can evolve effective counter-measures.

Within the framework of the Corona virus restrictions, the government has opened up the UT in totality. Political detainees have been released and communication facilities have been opened up. The security challenge may have reduced but it does remain in the face of a determined enemy.

The people can  leverage the opening-up for gainful purposes of progress and prosperity instead of turning it into an opportunity for the enemy to enhance recruitment of local terrorists and carry out other anti-national activities. The ball is now entirely in the court of the people of Kashmir; they can make or break their destiny and the future of their younger generations.