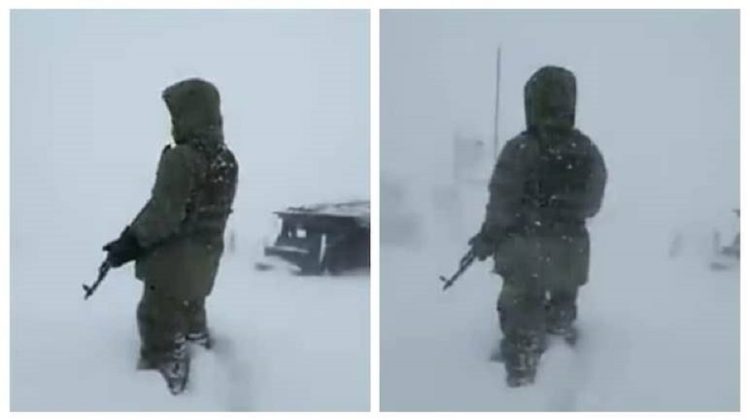 Every winter in Kashmir brings with it a new  story. It is so because  snowfall in the region tends to be heavy and damaging. The might of nature is normally felt in January and February, sometimes it  rolls on into March also. This year the most poignant story came on January, 8; it revolved around the image of a soldier on guard standing in knee deep snow undeterred by the adverse weather conditions. Many media platforms carried the photograph which also became viral in social media, eliciting salutations and positive comments.

The best ode came from a piece in India Today by Srimoyee Chowdhury titled, “Army Jawan stands firm amid fierce snow storm in Kashmir in viral video. Our superhero, says Internet.” “The news of heavy snowfall in various parts of Northern India has done quite a few rounds on the internet and the role of army personnel in rescuing the tourists stranded in that dire condition is nothing less than remarkable. Now, an incredible video of an Army Jawan standing firm in knee-deep snow has left Netizens amazed,” says Chowdhury in his article; a beautiful ode to the grit and determination that the Army maintains during the challenging winter months in Jammu and Kashmir.

On January, 8, there was a news item about the army personnel rescuing nine people, including five women, who were stranded in snow in the higher reaches of Jammu and Kashmir’s Rajouri district. Similarly, on  March, 19, there was news of the Indian army rescuing 30 people who were stranded in their vehicles following twin avalanches triggered by heavy snowfall in Kashmir. The rescue was carried out in different regions of the Valley which is an indication of the intensity of snowfall at that point in time. The most critical rescue operation took place in the Chowkibal-Tangdhar road, District Kupwara. The Army said that the mission took about six hours to complete and led to the rescue of 14 civilians, twelve vehicles were later retrieved during the day. Quite naturally all those rescued were treated like honoured guests of the Indian Army and given food, lodging etc. free of cost.

The foregoing simply heralds the beginning of the winter in the higher reaches of Jammu and Kashmir. One does not wish it but a lot more can happen in the days to come; the valley or parts of it can be cut off, there can be avalanches and cases of people as well as patients getting stranded in the higher reaches.

The administration puts in a huge effort, but, the volume of the challenge is so huge that, perforce, the assistance of the army needs to be taken. Also, the Army , due to its presence in the higher reaches and its resources is best suited to respond the fastest. The Army has always been forthcoming in dealing  with the adverse situation. It responds to emergencies unilaterally, without even a formal request for assistance which is the normal norm.

The army starts its preparations long before the winter sets in. In the preparation stage, under Operation Sadbhavna, the work starts with the conduct of extensive medical camps in which health check-ups are conducted and general awareness of the precaution to be taken is disseminated. As the winter goes on, the medical camps continue and emergency evacuations of medical urgency are carried out where required.

Once the Army goes through the process of relief and rehabilitation in a particular natural disaster it maintains a record of lessons learnt and procedures followed so as to efficiently deal with any such calamity in the future. Standard Operating Procedure (SOP) are evolved on the basis of the experiences gained.  The same process has been in place in the valley of Kashmir since the snow tsunami of 2005. There have been other occasions later when this SOP has been put to good use.

Evacuation of medical emergencies, including pregnant ladies, by army helicopters is commonplace during the winter season.  However, there are places in Kashmir and also in the higher reaches south of the Pir Panjal where, at times, even Helicopters cannot land. Under such circumstances, there are  many incidents reported where Army personnel have evacuated pregnant ladies on stretchers to the nearest road head and onto the nearest medical facility by military transport. The medical facility may be of the government or the Army itself, it does not matter, what is ensured is that timely and proper treatment is given. Such successful operations give to the Army the satisfaction of saving a life or seeing a bonny child coming into the world due to the effort.

During winter in Jammu and Kashmir, the Army carries out quiet unobtrusive work in all aspects that need management. When passengers are stuck due to break down of road communication the Army provides hot food, shelter, blankets and medical aid; once the weather permits, the Air Force flies in air sorties to evacuate the stranded passengers. When required, heavy machinery of the Army assists in snow clearance, Army doctors look after the health issues in remote cut off areas, shortage of food and other essentials including petroleum products is met by Army reserve stocks; whatever may be the problem the Army meets the same and provides life saving relief.

All of this has been going on for years on end; it does not get requisite media coverage since the media cannot reach the places where the action is taking place and the army is shy of blowing its own trumpet. Snippets of information come out when grateful locals narrate their experience to the media at a later stage.

It needs to be reiterated that even though the Disaster Management Policy of the government of Jammu and Kashmir is in place, the Indian Army assists in the management of disaster in every way that it can. The JK Police and paramilitary forces also put in appreciable effort towards disaster management. All of this constitutes a joint national response to the calamity. Such humanitarian effort is not made for the sake of aggrandisement.