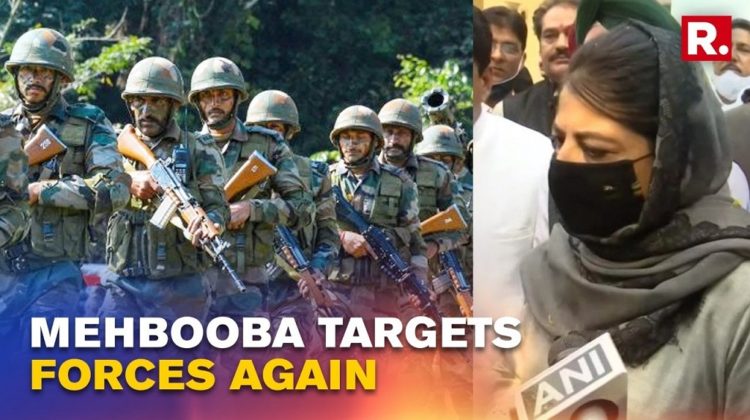 On 24 November, on the basis of specific information of presence of terrorists at Rambagh, Srinagar, a joint party of Indian Army and JK Police conducted a cordon and search operation. Three terrorists were neutralised in the ensuing fierce encounter. One of the three was identified as a top terrorist leader hailing from Pakistan who had been involved in the killing of many police personnel and civilians and was referred to as the ‘face of Pakistan sponsored terror’ in Kashmir.

Mehbooba Mufti, supremo of the soft separatist political organisation, Peoples Democratic Party (PDP) went public in denouncing the encounter and asserting that those killed were innocents. Her assertions were firmly refuted by Dilbag Singh, DG Police, Jammu and Kashmir. “Despite knowing the reality, some people are claiming otherwise …..all of a sudden, militants who are involved in police and civilian killings, have become innocents for people like Mehbooba Mufti,’ he said.

The ease with which Mehbooba spreads disinformation through half truths and blatant lies aimed at disrupting peace in the region is quite amazing. None of her statements can stand scrutiny of a reality check.

The tragedy of Kashmir is that a major portion of its leadership has sold its soul to the devil for the sake of money and power. These so-called leaders have no compunction in peddling the agenda of the enemy so long as it serves their vested  interests. They remain silent when innocents are being butchered by terrorists; it is only when a terrorist or an accomplice to terrorism is killed by security forces that their heart starts bleeding.

These leaders, with Mehbooba in the lead, find issues to spread misinformation and disinformation with the objective of putting seeds of doubt in the minds of the people about the honest intentions of the Union government and the people of India. Their modus operandi has been most aptly described by the Times of India as the, “hypocrisy of the pro-Pakistani lobbyists.”

A little before the aforementioned attack on the honest intentions and bravery of the security forces, Mehbooba had addressed her favourite anti-national topic of seeking reinstatement of Article 370 of the Indian Constitution. “If they (India) want to keep Jammu and Kashmir with them, they have to restore Article 370, hold dialogue with Pakistan and resolve the Kashmir issue,” she  said.

Mehbooba very easily sidelined the fact that the people have readily accepted the constitutional changes brought about in August, 2019, including abrogation of Article 370 and Article 35A. Voices against the very correct and constitutionally valid change are emanating only from people like her who were enjoying the unconstitutional facility provided by the article to run their governments without  scrutiny of central organisations like the Comptroller and Auditor General (CAG). It is these few families and their feudal leaders who were  looting the people; now, with abrogation of article 370, the loot has stopped.

Mehbooba wants India to talk to Pakistan, a country that has no standing in the international community. She ignores the fact that Pakistan is a sworn enemy of Kashmir, where it has sent terrorists over decades to kill innocents.  This demand only reinforces her anti-national credentials.  Mehbooba also needs to understand that  the only point about Kashmir that needs to be “resolved” is the return of the territories of the erstwhile princely state of J&K that are under illegal occupation of Pakistan.

Mehbooba also attacked the government for having dismissed from service certain government employees who were assisting the terrorist activity in Kashmir. Some such employees belonged to the family of the Hurriyat hawk, late Syed Ali Shah Geelani. In her thirst for power, she is unconcerned about the need for good, clean, transparent governance in the Union Territory that is possible only if the cancer within the government is removed.

She needs to be made aware that the Durbar move was merely an administrative need of the erstwhile princely state of Jammu and Kashmir in times when communication means were limited; it had  no traditional ethos whose “identity would be at stake.” In today’s world, where data can be shared and decisions made across the world by the click of a computer mouse, this very expensive and inefficient practice has, since long, become redundant. By speaking against its cessation Mehbooba is exhibiting her own lack of leadership and administrative skill, having failed to take this dynamic and necessary decision during her tenure as chief minister.

She has been making vague and abrasive statements about the motive of abrogating Article 370 being  looting the people of J&K. The reality is that the government and security forces of the Union Territory are putting in honest and dedicated hard work to pull the region out of the morass that has been created by the three decade long shadow of the gun and misgovernance by local parties led by corrupt feudal families.  In their noble pursuit they have the complete support of the people because of which great success in peace and development is being achieved.

The disinformation being spread by Mehbooba Mufti and her ilk is impeding the march towards peace and prosperity.  It is time now to put an end to the anti-people and anti-national agenda. Imposing a ban on such organisations is an option that the Government can consider. It would meet with minimal opposition from the people who are quite fed up with this brand of leadership and are looking for a change; on the positive side it will help curb terrorism, disruption and subversion.

(Jaibans Singh is a political analyst, columnist and thought leader)