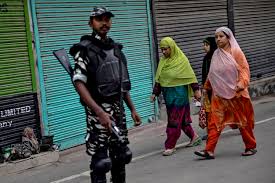 The Indian nation has remained engrossed in the all pervasive “K” issue since the beginning of this month when indications of some major change started coming in. In view of the volumes already written on the subject, a good columnist would realise that fatigue has set in among the readers, Another piece may not be a great idea, nevertheless, it is quite difficult to curtail the urge to put in some more words.

Earlier “stakeholders” was the preferred word to define the various players in the Kashmir battleground. Now, the goal posts have changed in a manner that has made the so-called stakeholders, national and international, irrelevant. In the ensuing fall out, the centre stage has gone to two protagonists – the people of the region and the Indian Union, in the given order of priority. Having changed the status of Jammu and Kashmir forever, the Narendra Modi led Government of India now has to convince the people of the region that what has been done is for their benefit.

Some important issues that have been flagged in the aftermath of this momentous affair need to be reiterated. Top on the list is the reaction of the Indian Nation; then comes Pakistan’s reaction since it will also guide the reaction of other ex-stakeholders; most important is the reaction of people of the region, presently not fully known due to restrictions and the fact that the change will take some time to sink in. Finally, comes the position of the security forces on whose shoulder lies the responsibility to control any adverse or violent situation.

The Indian peoples, since long exhausted by the never ending violence, turmoil and political disruption in the region, would have welcomed any change in the status quo and that is exactly what has happened. There is a belief that the change will be for the better even as some sections continue to remain cynically critical. The main grouse is not the change of the status; it is the so-called lack of consensus for the same. A realist would certainly say that no amount of discussion would have led to a consensus. This has often been substantiated by the failure of successive government of the NDA as well as the UPA in reaching to an accord whenever talks with separatists or Pakistan have been held.

Therefore, the decision to go for a change in status quo was the only recourse available notwithstanding the element of abruptness that it came with. It had to happen at some point in time and now it is over and done with! Whether it was right or not too right, only time will tell, but definitely, the situation will not deteriorate from the level where it was already standing.

Pakistan has been caught completely by surprise and is presently getting its act together. Its initial maneuverings on the diplomatic, economic and political front has not accrued the desired results. International support to its appeals is nowhere near what it would have desired and the decision to stall relations with India will have a much more critical impact on it, while India will hardly feel the pinch.

There, however, exists for India no reason to be too elated by the neighboring country’s disarray and discomfort. It is not likely to remain quiet due to the setback and will definitely strike back with more innovative and incisive methods. It should not be forgotten that Pakistan holds influence over China because of CPEC and on the US due to Afghanistan; it will definitely maximise this influence in its revised Kashmir policy. Pakistan will exploit such local elements that have lost their hold over the region due to the new dispensation. These assets have considerable power and their coming together poses a potent danger. People, who form the most important element being the centre of gravity, will elicit the focus of all competing powers. Whosoever gains the initiative will emerge the winner.  How they will react is still not known since restrictions are in place. It is also feasible that an initial calm will be more of the proverbial “lull before the storm.”

India has to take all possible actions to win the confidence of the people and remove their sense of insecurity and deprivation which would be a natural fall out of the change that has taken place. The government alone cannot do this; the entire nation will need to pitch in and that too with an open heart and clean hands; a long call but definitely the need of the hour. Since Kashmir is already quite comfortable on the development index, assertions of development and economic gain will not be enough to get the desired results. What is required is immediate end to the endemic corruption and inequitable distribution of wealth to the common man. Achieving this in the short term is a tall order for the government but absolutely imperative to remove the trust deficit.

A security threat beyond what has been tackled successfully earlier is not envisaged, even though high state of alertness is the need of the hour. What can be effectively leveraged is the close bond that the Indian Army has with the people, particularly those living in remote higher reaches. These people, being simple, gullible and not very educated, will be targets for rumour mongering and psychological warfare of the enemy and inimical forces. If the army gives to them the right picture and removes the insecurity and distrust that they may feel, the chances of their falling prey to the enemy machinations will get obviated.

There is definitely a need to look at the development with due sobriety and seriousness. There is also a need to remain vigilant and alive to the situation. It is the emotional connect as seen through honesty of effort which will pay maximum dividends.

The challenge to the nation has just begun.

(Jaibans Singh is a reputed expert in Geo-politics and security)