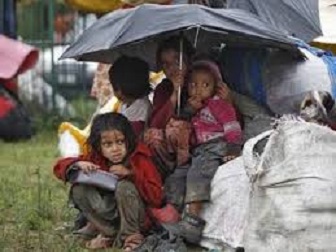 India has had a bad year so far as natural disasters are concerned. The situation of floods and inundation in the Kashmir valley was followed by floods in Assam and Meghalaya in late September. Cyclone Hudhud that struck the coastal areas of Andhra Pradesh and Odisha is yet another colossal calamity.

Since the tragedy in Kashmir was more visible through the media the response of the general public towards the same has been more proactive than the other two afflicted areas. Film stars and other prominent public figures are joining hands to organise charity events to collect money. There is talk of “turning this adversity into an opportunity” by rebuilding Srinagar as a “smart city.” Many other such grandiose schemes are doing the rounds.

The flow of aid through civilian agencies and organisations for rehabilitation of the flood affected areas of Jammu and Kashmir has been remarkable. Sadly, reports of bureaucratic red tape of the state government coming in the way of its expeditious and efficient disbursement are proving to be a big dampener on the proceedings.

The disaster in Jammu and Kashmir has certain parameters that need to be kept in mind while working out the rehabilitation plan. The affected area constitutes about thirty to forty percent of the Kashmir valley and some areas south of the Pir Panjal, mainly in Poonch and Rajouri. The rest of the state has not witnessed much damage.

There has been some unfortunate loss of life; the silver lining is that the death count has remained low due to herculean rescue efforts of the Indian army, security forces and the civilians who came out in large numbers to render aid and assistance. The much dreaded spread of epidemic has remained in control through timely medical intervention.

Tourism, which is the mainstay of the economy of the state, has not taken a big hit; in the Kashmir valley itself, major tourist spots like Gulmarg, Pahalgam, Sonamarg etc have not been affected, in Srinagar the famed Houseboats are more or less intact as are the Mughal gardens and other tourist spots that were on high ground. Tourist influx in Ladakh and religious tourism to the Mata Vaishno Devi shrine in Jammu has not been interrupted. In consideration of the magnitude of the calamity it is a God send that the state retains the potential of an economic bounce back through tourism which the government should exploit.

The impact of the calamity in urban areas of Srinagar has resulted in huge losses to the trading and business community. These losses are not restricted to the Kashmir people alone. The traders of Jammu have large transactions with their counter parts in Kashmir the accounts of which have been washed away; the plight of these traders needs urgent attention of the government. The state government needs to take proactive steps to overcome the crises being faced by the business community. What has been lost cannot come back, it is best to look ahead and get the business going to ensure that loss due to inactivity is minimised.

A large portion of the affected infrastructure in Srinagar is government property. The government needs to come up with a plan to rebuild the city and other affected areas but not before proper town planning that precludes a repeat of what has happened. The sewerage system, storm drains, water body embankments and other essential aspects need to be put in place. Along with the aspiration of building a “smart city” it is essential to ensure that the avarice and greed that led to the tragedy is eradicated forever.

More attention is required to be paid to the flood affected areas south of the Pir Panjal. The affected people in these areas are poor villagers who cannot build their devastated houses without relief from the government. Relief, unfortunately, has not reached them so far. They are languishing in tented camps, their children are missing out on education and there are acute health related problems. More disconcerting is the looming winter when these displaced people will suffer immensely due to lack of shelter, bedding etc. A similar situation is prevalent in the rural flood affected areas of the Kashmir valley also. These areas are not as much in the limelight as Srinagar city even though their problems are of a more critical nature.

The army is doing its bit to help the people and it is for this reason that they are surviving, there is a need to build on the support being provided by the army on an emergent basis.

Speed of thought, speed of action and speed of execution is essential in Jammu and Kashmir in view of the limited time available before winter sets in, failing which, the rehabilitation process will be more disastrous than the disaster itself. The need, therefore, is to set aside the proverbial blame game and get working. Media coverage to floods and inundation in the Kashmir valley was much more that in the North-East or in the cyclone hit coastal areas. Media, of course, has many explanations to justify the same. The Kashmir floods were the first in the list of calamities; this was also the first time in a hundred years that the Kashmir valley had been thus afflicted giving it “news value” over Assam and Meghalaya; Cyclone Hudhud was “fast and furious” so coverage was also for a restricted period etc.

Lack of media coverage does not imply that the nature of the calamities in the North -East and in the coastal region was any less severe than in Kashmir or that the affected people of these areas are not suffering in equal measure. All natural calamities affecting the nation deserve equal attention from the central government, the media and the people of the country. Ultimately, the people who are directly affected and the state government have to take the lead, after which, many hands will join in to make the journey easier.