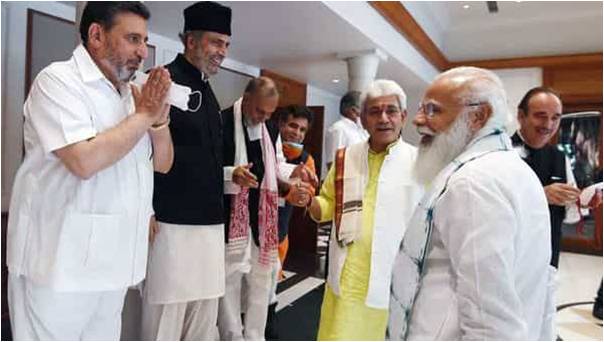 The Government of India invited political leaders of  Jammu and Kashmir (J&K) for a meeting in Delhi chaired by Prime Minister Narendra Modi. The centre gave no agenda  for the meeting and placed no time restrictions. By doing so, it opened the forum for the participants to say what they wished and for as long as they wished.

The meeting was held on Thursday, 24 June, at New Delhi; 14 prominent leaders from J&K including representatives of the Congress and the Bharatiya Janata Party (BJP) attended. The centre had  in attendance, Home Minister Amit Shah, National security advisor Ajit Doval and Lt Governor of J&K, Manoj Sinha.

The meeting was significant due to a number of aspects. It was the first such initiative taken by the centre since the constitutional changes brought about in August 2019 that led to abrogation of Article 370 and Article 35A of the Constitution and bifurcation of the state into two Union Territories of J&K and Ladakh. Many of the leaders who attended the meeting had been under detention for different periods post the application of the constitutional changes.

Normally the government would have followed a protocol of holding a few meetings at a lower level  before scheduling a meeting with the prime minister, this process was cut short by calling a meeting at the highest level directly. No invite was given to any element of the separatist organisations.

It was quite apparent that the central government was very serious in engaging the legitimate stakeholders in J&K with utmost urgency and an open mind. There was an apprehension that some  local parties would insist upon attending such a meeting only after restoration of Article 370 or grant of statehood to the region. That they attended the meeting without putting forth any such demands is reflective of their desire to engage with the centre with an open mind. This is quite a departure from the rigid stands that were a norm earlier, it seems that the leaders have realised that their relevance can be maintained only if  they remain engaged in any process that will decide the future of the region.

The meeting lasted for three and a half hours with the prime minister sitting all through. The centre thus stood by its commitment to give a patient hearing to all the attendees. Dr. Farooq Abdullah, being the senior, was invited to speak first but he opted out and the mantle went to Ghulam Nabi Azad. He presented five points of which the main was early grant of statehood and holding of election in the given order of priority. The centre reiterated its commitment to hold elections as soon as the delimitation process is completed but also indicated that it preferred to hold polls before addressing the question of statehood. This aspect is bound to create political divergence and debate in the future.

Social interaction before the meeting

On the issue of release of political persons who continue to be under detention the centre called upon Lieutenant Governor Manoj Sinha to set up a committee to review the cases and identify those to be released.

Interestingly, restoration of Article 370 did not generate the expected level of articulation even though some leaders like Mehbooba Mufti did raise the issue. Statehood and elections thus emerged as the bigger agenda.

The participants have given a positive vibration in their interaction with the media after the meeting. It was termed as a “step in the right direction” by Omar Abdullah. Sajad Lone opined that the meeting left in its wake a “sense of optimism” and indicated a  “new phase of reconciliation in J&K.” Even senior leaders like Ghulam Nabi Azad had only good things to say about the meeting which he stated was held in a very cordial atmosphere. The prime minister stuck an emotive chord  by saying that he wanted to reduce both “Dil ki Doori” (distance from the heart) and “Dilli ki Doori” (distance from Delhi).

Pakistan’s  role in the ongoing developments also merits consideration. A few days before the meeting Pakistan issued a “warning” that it would oppose any move by India to divide or change the demography of Kashmir. Post the successful conduct of the meeting, Pakistan’s obnoxious foreign minister Shah Mahmood Qureshi described it as a drama and a public relations exercise. It was a pathetic response which has indicated the frustration of the neighbouring country with regard to the improving situation in J&K.

Pakistan has been desperately trying to, once again, become a party in the so-called Kashmir dispute. It has a paid following within and outside India that lobbies for this aspiration by saying that a solution is not feasible without taking Pakistan on board. Pakistan has demanded restoration of the pre-August 2019 situation for resumption of talks knowing full well that India will not agree. This obtuse diplomacy leaves no window open for resumption of talks. By doing so the country is even annoying it’s powerful allies like the US and Saudi Arabia, but it is unconcerned. The reality is that the situation in Kashmir has gone much beyond Pakistan’s stated posture and the country has simply run out of ideas. Ignoring the country and moving on is the only option left and all stakeholders understand this.

On many earlier occasions the security forces had created in J&K an environment of peace whereby the political process could be initiated. All such opportunities were frittered away. When seen in this context the recent meeting assumes significance; while no major decision has been taken it has definitely set on course the political process. It has also been well received in international circles, especially by the Biden administration and the west. The takeaway is serious and time bound action to complete the process of delimitation and follow it up with polls and restoration of statehood. The central Government needs to ensure now that the faith reposed upon it is not betrayed.