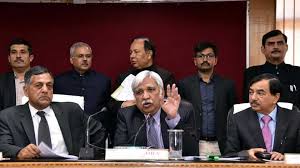 Parliamentary elections in India generate a lot of excitement; there are fierce debates and commentaries with predictions of the result being made by one and all. The entire exercise has a festive sheen! Social media has added yet another dimension to the process. Elections throw up a unique and challenging situation in Jammu and Kashmir. While the discussion and anticipation level is the same as the rest of the country, what is different is the security aspect and attempts towards derailment of the process by inimical foreign powers and their stooges. The upcoming Lok Sabha elections, for which the seven phase process in the state has been declared, are no different.

Controversies, blame game and acute acrimony are a normal process in the politics of the state and during election time they reach a crescendo. It is no surprise then that the decision of the Election Commission to not hold simultaneous elections for the state as well as the national assembly has come under a lot of criticism. The decision of the commission is based on a very thorough ground assessment and is considered by many experts in the field to be correct. Elections in the state are testing in the best of times and to complicate them further by simultaneous polls would be “biting more that what can be chewed.” The political parties would also find it difficult to mobilise at the level that such an exercise would entail.  Successful conduct of the parliamentary round will pave the way for the state assembly elections. It is to the credit of the Election Commission that it has declared a willingness to conduct the state assembly set of polls within a month of completion of the Lok Sabha poll process.

The parliamentary election in 2014 witnessed domination by the Peoples Democratic Party (PDP) and the Bhartiya Janata Party (BJP). While PDP took all three seats in Kashmir the BJP took the remainder in Jammu and Ladakh. The Srinagar seat in Kashmir was later won by Farooq Abdullah of the National Conference (NC) in a by-election necessitated by the resignation of Tariq Hamid Karra who switched over from PDP to NC in 2016.

The two winning parties of last year are facing anti-incumbency and others are gearing up to give a good fight. The Congress and National Conference are in talks for seat sharing but the matter is open at the moment. A new dimension to these elections will also be provided by a new party in the fray named the Jammu and Kashmir Peoples Movement (JKPM). The party has been launched by Shah Feasal, a doctor, turned bureaucrat, turned politician and with him are some young minds like Shehla Rashid, who gained prominence as a Vice President of the Students Union in Jawaharlal Nehru University (JNU). How the party fares remains to be seen but it will definitely energise the democratic process and bring in some new initiatives.

There is some pessimism in the air with respect to voter turnout which is being seen in the context of the low percentages in some areas during the polls for the local bodies in September-October last year. Threats from terrorists do inhibit people from casting their votes but this should not be seen as a restraint to the democratic process; what should be celebrated, on the other hand, is the courage of those who come out to vote against all odds.

While the political parties prepare for the polls in right earnest, focus also has to remain on ensuring that inimical forces are not allowed to derail the process as they would wish to and work for. The election commission will need to remain bold and confident in the face of all odds. Small setbacks, in case they come by, should not be allowed to shake its resolve to go through the process in the manner prescribed; the idea is to remain stead fast despite all provocations.

The security forces have achieved complete domination of the counter-terrorism environment. These gains will definitely give adequate confidence to the common man to come out and vote in large numbers. Beyond this, the traditional apolitical stand of the security forces will convince the people that they will be able to exercise their franchise in a free and fair manner. The terror masters are likely to make a huge effort to fructify their malevolent agenda of disrupting the elections. It is this situation that needs to be absolutely understood and all efforts need to be directed towards containing the same.

Apart from enhancing its domination of the security environment the army and other security forces should now work towards strengthening the already strong bond that they enjoy with the people. Also, the need for proactive operations and relentless vigilance on the line of control, the international border and the interiors cannot be over-emphasised. The security process should be carried out with the support and active participation of the people. Preparations have already started as has been confirmed by the senior officers of the Army, the police and the paramilitary forces, now the threshold should be increased in a tacit and low key manner.

Credible steps need to be taken to ensure that false propaganda is not allowed to gain traction. Media has a very important role to play in this regard. The misconceptions, rumours etc. that inimical forces will try to spread as a part of their propaganda campaign can be effectively countered by the media by giving out the correct picture. By presenting the situation in the right perspective and in a timely manner the media can negate the forces aligned against the nation. Political leaders should also restrain themselves from making sweeping statements that can harm the poll process. While campaigning hard for their candidature they have to ensure that nationalism stay in the forefront always and every time.

While there is no reason to be overly worried about conduct of polls in Jammu and Kashmir there is definitely a need to put in the extra effort that this sensitive region demands. Some caution, extra security vigilance, close contact with the people and responsible behaviour will ensure a resounding success.

(Jaibans Singh is a reputed journalist, columnist and author)