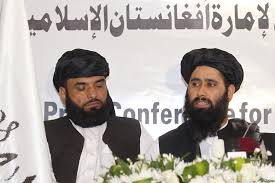 Afghanistan is going through a period of transition; though significant, it is only a prelude to the more critical things to come by in the near future. The recent initiative at Doha, Qatar, by the US to open talks with the Afghan Taliban has gone horribly wrong. It has set the pace for a confrontation that will have far reaching consequences in the entire region.

No amount of bravado can hide the fact that the government of Afghanistan is not in a very strong position to ensure the sovereignty and integrity of the Nation without the support of the US led coalition. The Afghan National Army (ANA) under its Chief Lt General Sher Mohammad Karimi is slated to take on all security responsibilities once the International Security Assistance Force (ISAF) leaves Afghanistan. A huge media campaign by the ISAF is in place to give an impression that handing over of the responsibility is going on in a smooth manner. The position on ground, however, is very different. Despite a respectable boots on ground strength of about three and a half lakh soldiers, the ANA continues to be poorly trained and indifferently equipped. The soldiers are semi literate and afflicted with rampant drug addiction leading to severe discipline problems. Their ability to take on the more professional Taliban forces without the protective umbrella of the ISAF is quite suspect; in fact, there is a very potent probability of many of them defecting to the Taliban, with their weapons, once the NATO forces leave Afghanistan. It is no wonder that President Karzai is a very worried man.

The entire game plan at Doha is an attempt by the US to orchestrate a dignified withdrawal from Afghanistan in 2014. The US is desperate to strike some sort of a deal with the Taliban in order to keep its drawback schedule intact. As in many of its earlier initiatives the US depended upon Pakistan to set things out and has, as usual, emerged with its fingers burnt. Now President Hamid Karzai is sulking while the Taliban has already donned pretensions of being rulers-in-waiting. American diplomats, quite unknowledgeable about the ways of the Middle East in the best of times, are clutching at straws to retrieve the situation while Pakistan is gleefully taking the centre stage and working overtime to gain as much leverage as it can from the mess that it has created in the first case.

Just a little while ago when Osama bin Laden was killed in an upend military locality of Pakistan, the country’s relations with the US hit rock bottom as did its credibility in the international community. The US went to the extent of establishing its logistic chain from Russia and the Central Asian Republics (CAR) at a prohibitive cost rather than depend upon Pakistan for the same; huge cuts were also made to the aid that the US had promised to its so-called ‘most abiding ally in the global war against terror’. Yet, in a short period of time Pakistan has once again succeeded in manoeuvring itself into a prominent position in the decision making loop for the future of the region. Quite incredible!! Why the US continues to play in the hands of Pakistan is something that simply cannot be understood, but then this is a reality that one has to deal with.

Pakistan is now trying to push the US and its allies into a corner so that some power sharing formula can be worked out with the Taliban. The idea would be to give to the organisation control over a sizeable area. This would amount to a virtual division of the nation that may well translate into a civil war immediately after the proposed draw back. In the eventuality of a civil war nobody, be it Russia, Iran or CAR that share borders with Afghanistan will come in aid of the legitimate West installed government of Afghanistan; US and NATO, very obviously, will not be very eager to do anything substantive. Pakistan will then do what it does best – give covert support to the Talban while making all sorts of reconciliatory noises. The end result will be an ouster of the government in Afghanistan and back to fundamentalist Taliban rule that suits nobody other than Pakistan.

For India, this would pose a critical situation. All the development assistance, aid, training of security forces, opening avenues for education of Afghan nationals and a host of other initiatives taken to boost democracy and the government of President Karzai will go up in the air in a jiffy. Those who will be left to enjoy the fruits of the efforts will a motley group of Islamic fundamentalists who see eye to eye with Pakistan and would not be averse to a militant spill over of their ideology into Indian soil via Jammu and Kashmir.

It is, therefore, time for India to assert itself in the affairs of the region and see how best the already tenuous situation can be restored. First and foremost, Pakistan has to be isolated from the decision making loop. The US and its allies have to be prevailed upon to leave a suitable force behind that can sustain the nascent ANA till such time that the government finds its feet. No doubt should be left in the mind of the Taliban that retribution for any attempt to bring back the pre-2001 situation will have terrible consequences. The dialogue with Taliban should focus on the organisation shunning the path of violence and joining the democratic process in the country with no control whatsoever of any territory. Overall, India now needs to be very sensitive to the impact of the evolving developments on her relations with Afghanistan and her position in the region. Wait and watch is no longer an option.