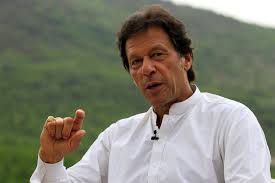 “Perhaps if the BJP – a right-wing party – wins, some kind of settlement in Kashmir could be reached.” This statement has been made, not by a Bharatiya Janata Party (BJP) candidate in election mode, but by Imran Khan, Prime Minister of Pakistan. Khan made this observation to a small group of foreign journalists in an interview on April, 09. He further elucidated his point by adding that the Congress party, if elected to form the next government, would be too scared to seek a settlement with Pakistan, fearing a backlash from the right wing.

On the sticky issue of proliferation of militant activity directed towards India from the soil of Pakistan Khan, once again, reiterated his resolve to dismantle the structure and emphasised upon the support that he has from the all powerful Pakistan Army in this regard.  The social media is abuzz with reactions to these statements with people integrating Imran Khan into the “Main Bhi Chowkidar” election campaign of Prime Minister Modi.

Interestingly, a few days earlier, on April, 06, the same Imran Khan had attempted to put a spook in the election campaign of the BJP by once again raising the issue of the downed F-16 of his country. It is well known that Pakistan is taking great pains to prove to the world that it has not lost an F-16 aircraft in the dog-fight with the Indian MIG-21 Bison. Pakistan’s hand in raising the matter in a US based magazine to say that Pentagon count of the F-16 inventory in Pakistan has found all jets to be intact is well within the realm of possibility. Imran Khan has attempted to gain traction from the news piece by tweeting, “The truth always prevails and is the best policy, BJP’s attempt to win elections through whipping up of war hysteria and false claims of downing a Pak F16 has backfired with US defence officials also confirming that no F16 was missing from Pakistan’s fleet.” There is, of course egg on the face of the prime minister now that the Pentagon has officially stated that it is “not aware of any investigation like that.”

The very next day, on April, 07, Pakistan’s Foreign Minister Shah Mahmood Qureshi dropped another bombshell by insinuating that India will attack his country again in the month of April. “We have reliable intelligence that India is planning a new attack on Pakistan. As per our information, this could take place between 16 and 20 April,” Qureshi told reporters in his hometown, Multan. India has, of course, rejected the claim as “irresponsible and “preposterous” and aimed at whipping up war hysteria in the region.”India rejects the irresponsible and preposterous statement by the foreign minister of Pakistan with a clear objective of whipping up war hysteria in the region. This public gimmick appears to be a call to Pakistan-based terrorists to undertake a terror attack in India,” said Raveesh Kumar, the Indian External Affairs Ministry spokesperson. In this statement, the mention of a possible terrorist attack by Pakistan during the election period in India gains significance.

Under the circumstances, the sudden change of heart towards the BJP by none other than Imran Khan and that too within two days of showing out and out belligerence towards the party is something to think about. Two days is a long time in politics and in this context the change of posture should not come as a surprise. What is important is to try and understand the circumstances that have led to this U-turn and what Khan intends to gain from it. Has Khan been briefed about the imminent victory of the BJP in the elections in the three days since he tweeted against the party? Is he attempting to build a reconciliatory posture as a prelude to Government formation in India? Or, is he merely sending a message to the international community of him being open to talks with India, especially the BJP, should it come to power?

Prime Minister Imran Khan is very conscious of the manner in which his predecessor, Nawaz Sharif was ousted from office for attempting to clip the wings of the Pakistan Army. It is common knowledge that hundreds within the country were involved in the Panama Papers controversy but only Nawaz has been jailed and his family involved. Khan is, quite apparently, moving with great caution. It is axiomatic that he would have taken permission from the army before endorsing the BJP in this manner, so what we have in hand is the new Pakistani policy for engagement with India. The statement will definitely come as a big morale booster for the Saffron Party; is this what Khan and the Pakistan Army want?

It needs to be noted here that India has been following the policy of proactive retaliation to Pakistani misadventures along the Line of Control. Heavy retaliatory fire by India has caused Pakistan to admit to some casualties in the beginning of this month, this is unusual. India has reiterated that the pressure will continue to be maintained till Pakistan does not convincingly curb its cross border activity.

The BJP has also made it clear in its manifesto and through statements made by its senior leadership that it will continue to maintain a policy of zero tolerance to terrorist activity and punitive retribution to any military misadventures by the neighbouring country.

The writing on the wall is very clear! Imran Khan simply has to make good his promise of curbing militant and terrorist activity directed against India from the soil of his country. No other diplomatic rhetoric and sweet talk is going to work out with the Indian leadership, definitely not with the BJP. Once the will to work in this direction is demonstrated the Indian government will certainly respond to the Pakistani call for talks. A lot also depends on how the elections, especially in Kashmir, fare. A terrorist attack at this sensitive juncture will irretrievably dampen any future engagement.

(Jaibans Singh is a reputed political analyst, columnist and author)