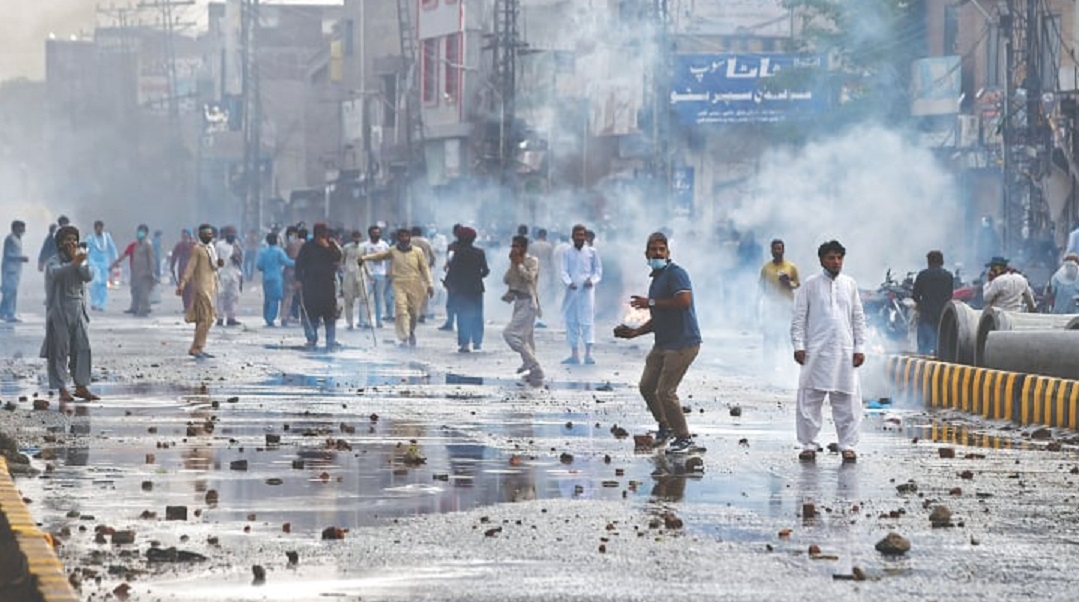 Pakistan is in the throes of a huge political and internal security crisis. A politico-religious organisation named  Tehreek-e-Labbaik Ya Rasool Allah (TLP) is resorting to unprecedented rampage across the country. The protests escalated to unmanageable levels  post the imposition of a ban on the organisation  and arrest of its Emir (leader), Saad Hussain Rizvi. The group responded by taking more than a dozen policemen, including a senior officer, hostage; thankfully they were released after some time. More than 40 Police personnel and Rangers are reported killed and an excessive number injured due to the rioting. The Government of Pakistan has been forced to block all social media access across the country.

The TLP was formed only five years back by a rebid Islamic fundamentalist named Khadim Hussain Rizvi. The organisation is against all minorities in Pakistan, especially the Shia community. It also has an agenda to rid the country of all “foreign influence.” The ultimate objective is to create a chaste Islamic society consisting only of Sunni Muslims.

TLP went political in 2018 when Rizvi too contested the polls and won with a huge margin. The party garnered 2.5 million votes across the country, most significantly in Punjab where it ate into the vote bank of Nawaz Sharif’s PML (N). Khadim Hussain Rizvi died in November 2020 and his 26 year old son, Saad Hussain Rizvi Khadim, was elected as the new Emir.

Saad Rizvi has raised the issue of expelling the French diplomats over the publication of blasphemous caricatures of Prophet Mohammed by the French magazine, Charlie Hebdo. More than 55000 tweets on #FranceLeavePakistan campaign initiated by the TLP have been recorded.

The movement has spiralled out of control due to indecisiveness and ineptness of the federal government of Pakistan. As a result, a huge diplomatic crisis has now erupted with France recalling 15 diplomats from Pakistan and advising its nationals in Pakistan to temporarily leave the country.

TLP has declared a temporary truce after the federal Government agreed to go for a parliamentary vote on expulsion of the French Ambassador and set aside criminal cases against the group’s members. Expulsion of the French diplomats will have huge international repercussions. It will become clear to the world that  radicals now hold the country to ransom.

While Pakistan wrestles with its acute internal security problems, neighbouring Afghanistan is preparing for a great challenge with the imminent withdrawal of the US and allied forces from the country which will be symbolically completed on 11 September this year, which marks 20 years of the 9/11 terrorist attack on the World Trade Centre and the Pentagon. The President of Afghanistan, Ashraf Ghani, is putting up a brave front even though it is well known that his government will find it very difficult to control the Taliban wave. A number of countries like Russia, Iran and China are bound to attempt an increased influence over Afghanistan. Since Pakistan’s ISI maintains ties with Afghan insurgent groups, it can be that it will meet the requirements and demands of all weather friend China.

US withdrawal from Afghanistan

Also, Pakistan’s much touted initiative to “resolve issues”  with India, which came up in March with the re-commitment by the Director Generals of Military Operations (DGsMO) of the two countries to uphold the ceasefire agreement and protocols of 2003, is now floundering. While the ceasefire is holding, forward movement for talks is all but stalled. Prime Minister Imran Khan and the all powerful Army Chief, General Qamar Bajwa, laid down “Kashmir” as the focal point for any discussion. India is very clear about the status of Jammu and Kashmir as an integral part of the country in which Pakistan has no role to play, hence, this cannot become the agenda of any dialogue. The Indian Government spoke of resumption of trade to which Pakistan has not agreed.

Despite the ceasefire holding, Pakistan’s interference in Kashmir has not stopped. The terror masters sitting across the border are motivating the operating cadre in Kashmir to escalate terrorist activity during the holy month of Ramadan as has been the policy for many decades now. The game plan started with the brutal killing of  a Territorial Army (TA) soldier, Havaldar Mohammad Saleem Akhoon, at Bijbehara, Kashmir. The response of the security forces was swift and relentless. Within two days of the murder the two terrorists responsible for the dastardly act were killed; 10 more terrorist were also killed in different encounters within 72 hours of the murder. The game plan of the terrorists has thus been neutralised and Ramadan is being celebrated in a peaceful environment in the Valley.

There are also reports of Pakistan attempting to destablise Punjab; the attempts to smuggle in drugs and weapons in the border state are on the rise as is the attempt to finance and urge Khalistani elements sitting in Europe and the US to spread hateful propaganda in the state with the objective of causing a divide between the Hindu and Sikh communities over there.

It is quite apparent that despite talk of peace and despite its precarious internal security situation, Pakistan is not relenting from activities that can cause disruption and insecurity in India. The critical situation in Afghanistan is adding to the regional problems. India will need to formulate a vibrant response to the grave challenges that are posing a serious security risk to the Nation. The idea is to keep a close and vigilant eye on the situation that is constantly changing, mostly for the worst, and respond in a strong manner. While staying ready for all contingencies it is necessary to keep the International community informed and engaged.

The circumstances call for an “all of nation” approach. All political parties should set aside personal agendas and jointly meet the security challenges along with the people of the country. There should be overwhelming support for the Indian Armed Forces as they set out to guard the sovereignty and territorial integrity of the nation.

(Jaibans  Singh is a Geo-strategic analyst, columnist and commentator)