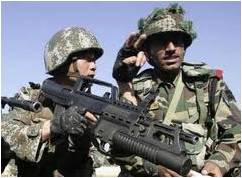 Defence Minister AK Antony carried out a periodic review of the security situation, internal and external, of the country with the service Chiefs in New Delhi recently. In the course of the discussions he expressed concern at China’s build-up of military infrastructure along the border. The concern comes in the wake of a decision by the Indian establishment to upgrade its military presence along the line of actual control with China in the Ladakh region and in the North East border areas. “We, too, have been improving our infrastructure and military capabilities in the eastern sector. We are doing so not for confrontation, but to protect our territory and also to build an effective deterrence…so that we can protect every inch of Indian territory,” said Antony.

In the meantime, terming India’s decision to beef up the security along the border with China as a “sensitive move”, an official Chinese daily wrote that it would result in raising tensions. “The action is completely not worthwhile. Currently, India has 40,000 troops in the disputed area, and if the further 100,000 is deployed, the total number of the troops will reach 140,000”, an article carried by official People’s Daily Online said on Tuesday. “It will result in a tense situation in the region and harm India’s own interests. Increasing troops on the border area is always a sensitive move and it is especially sensitive to increase troops on a disputed border area”, it said. “In an era when precision-guided weapons are developing rapidly, everyone with common sense knows that concentrated troops could be eliminated easily”. Clearly, China is not taking kindly to India’s efforts to enhance its defence potential but this should not deter the country from meeting its urgent strategic and defensive requirements