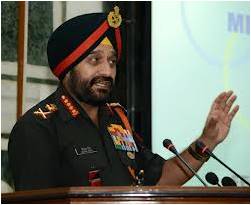 Army Chief General Bikram Singh has, during a press conference on the eve of Army Day, given a very strong response to the brutal killing and mutilation of bodies of two Indian soldiers by Pakistani intruders on January, 08, 2013, on the line of control in Jammu and Kashmir. He stated that the Indian Army would reserve the right to retaliate at a place and point of its choosing. While describing the act by the Pakistanis as gruesome, illogical and against the ethics of soldiering, the army chief said that it was premeditated and meticulously planned right up to the level of diplomatic and media engagement that an incident of this nature would entail. He further added that the Indian army is hurt, angered and annoyed by this dastardly act and these feelings have been conveyed to the adversary through multiple channels both political and military. The government of India has lodged a strong protest; the Indian director general of military operations has communicated most strongly to his counterpart in Pakistan and at the tactical level the same has been done through a flag meeting on the line of control. The chief further added that this was a very emotive issue that has caused tremendous hurt to the army.

While elaborating on the incident the army chief said that even though the same has strategic nuances the army would uphold its moral ascendency at the tactical level with commanders on ground maintaining an aggressive and offensive posture along the line of control. Ceasefire would be upheld only so long as the adversary upholds it and the response to violations would be spontaneous, professional and measured.

There have been 117 ceasefire violations in the preceding year and nine have already occurred in the first two weeks of this year which comes to about one every three days, this frequency does raise doubts about the efficacy of the ceasefire. The chief clarified that incidents of ceasefire violation are localised more so to Uri and the Krishna Ghati (Mendhar) sectors, the rest of the line of control is more or less calm. This translates into a perception that the ceasefire though shaky continues to hold.

The statement of the army chief with regard to the meticulous planning that has gone into the operation is something to ponder upon. Pakistan is looking for improving relations to the extent of inviting the Indian Prime Minister for a visit and on the other hand it is resorting to pre meditated barbaric acts of this nature. This highlights, yet again, the imbalance that is known to exist in the military and political thought process of the nation.

The matter does not stop here; the complicity of Jihadi and terrorist elements in the whole game plan is firmly established by statements made by the likes of Hafiz Saeed. Even though the official machinery of Pakistan prefers to stay in a denial mode so far as the stake holders of terror are concerned it is well established that fundamentalist elements in Pakistan are not ready to relent from the pursuit of their nefarious agendas; in fact, they intend to raise the level with the induction of the Taliban in their fold once the NATO forces leave Afghanistan. There is every reason to believe that Pakistan with its evil appendages has every intention to keep the Kashmir issue not only alive but also boiling. In this regard the army chief has clarified that the Indian Army is alive to the threat posed by such fundamentalist elements in view of the fact that Pakistan is known to use terror as an operational force multiplier.

Under the prevailing circumstance an enabling legislation like the armed force special powers act continues to hold relevance in Jammu and Kashmir and its revocation or even dilution in the short term, as is being demanded by some local political establishments, would not be apt. This has been reiterated in no uncertain terms by General Bikram Singh.

It goes without saying that any dovish approach to the Pakistani insistence on demilitarisation of the Siachen glacier does not merit any serious consideration by India given the tenuous nature of the Pakistani military psyche. Pakistan has the audacity of agreeing to everything; signing the dotted line; promptly occupying heights vacated by India and then terming the whole thing as the handiwork of some non state actors. In its present shape and context the country simply cannot be relied upon and India has no option but to maintain readiness against all contingencies. The strong statement by the army chief dispelling all talk of hurried demilitarisation of the glacier needs to be seen in this context.

The army has more than adequately explained its stance and its policy with regard to the very unfortunate incident that has caused national revulsion and outrage. One cannot think of a better way to respond to such a ghastly act; now it is for Pakistan to understand that it is harming itself more than anybody else by indulging in such adventurism. The army has also laid out on the table its policy vis-a-vis Pakistan which would be based on maintaining a high level of vigil and operational readiness. This in turn translates into maintain a status quo in Jammu and Kashmir so far as deployment and enabling of the force structure is concerned. The army chief has not minced his words and it is now up to the nation to stand firmly behind its army in the face of all forthcoming challenges. Pakistan, on its part, would be well advised to take the strong words of the Indian Army Chief as a warning that the force can be stretched thus far and no more and it would be circumspect for it to rein in its rogue elements as fast as is possible.