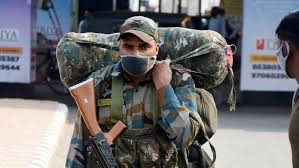 COVID-19, more popularly known as Corona Virus has posed the biggest challenge in centuries upon the human population of the earth. Its rapid spread from China to the rest of the world is leading to a breakdown of health infrastructures of entire Nations while others like India are grappling with the challenge of containing its spread.

The Indian Army has always stood as a sentinel of the Nation in times of external threat and internal emergencies. In this instance too, the force is preparing itself to make a meaningful contribution to the overall strategy being evolved by the nation to fight the virus.

The Northern Command of the Indian Army, that is operationally responsible for the Union Territory of Jammu and Kashmir and the Union Territory of Ladakh, has a unique set of challenges to meet under the existing circumstances. Being operationally deployed, the command cannot go into isolation mode since strict vigil along the LOC and in the hinterland has to go on.  For many decades now the Army in Jammu and Kashmir has remained involved in caring for the health of the locals, especially so, in remote areas where Government provided medical facilities are scarce. The Army has a responsibility towards these people at the present stage when things are getting critical.

The first and foremost responsibility is to ensure that the virus does not spread within the ranks of the army despite the need to stay active. The silver lining is that the soldiers are very disciplined and can be depended upon to follow instructions in letter and spirit; secondly, soldiers are healthy and have the capacity to fight the virus better than others.

The army has many doctors who are experts in public health activities. They have immense experience in implementation of the National Health programs in the Armed Forces and containing diseases like Malaria, TB, HIV and Viral Hepatitis. Such doctors have been  entrusted with formulation, planning and implementation of preventive activities against the Corona Virus outbreak within the army and in the J&K and Ladakh sectors.

The Northern Command is putting in a tremendous effort towards creating awareness in remote areas of the  Jammu, Kashmir and the Ladakh region where such information is not easily available; soldiers are sharing information on preventive measures with villages.

Ladakh is the first area covered by the army to check the proliferation of the virus. It has sent  medical teams, established screening facilities and quarantine/isolation centres for the civilians across the region. Personal protective items like gloves, sanitizers etc. are being provided. The model created in Ladakh has been put into practice in Kashmir too. Presently, the Jammu region is being covered. Work is being done in concert with civil  authorities. All health facilities of the Army are open to everyone. Testing facilities for the virus in Jammu and Kashmir are now available in Jammu Medical College, SKIMS, Srinagar and Command Hospital Udhampur;  these are being put to optimum use for defence personnel and civilians alike.

It is, however, in the domain of personal protection from the virus that the Northern Command, along with the entire Indian Army are putting in maximum effort, knowing full well that they are an entity that simply cannot afford to be laid down.

Headquarters are running on skeleton strength with minimum required staff attending office. Entry into offices and Headquarters has been staggered, a large number of hand washing stands have been established at entry points so that all those who come in do so only after washing their hands.

The National War Memorial in Delhi has been closed to the public, wreath laying is being done by the Guard on duty. Canteen services and markets in all cantonments have been closed except for essential items and for these too door to door service is being done.

All leave and postings has been deferred till 15 April 2020. Personnel returning from leave are being monitored for 14 days and being extensively debriefed; anyone who has a history of being in touch with a suspected case of COVID-19 is immediately quarantined.  Individuals returning from high transmission areas are also being quarantined. Those found to be even slightly symptomatic are being immediately segregated and tested.

One thing good about the Army is the detailed briefing that is always carried out to ensure that orders are well understood and implemented. The precautions to be taken during this period of health crisis are being issued by all commanders up and down the chain. They are being repeated at regular intervals so that all are aware. This procedure is now paying handsome dividends. The second thing that is helping is the capacity of the force to obey orders as also enforce the processes.

The Army is adhering to instructions in a quiet, calm and efficient manner while staying alert to meet all emergencies within the organisation and with respect to the entire nation. It is poised to respond to the call of the nation in the manner that Prime Minister Narendra Modi is extolling all citizens to adopt. It is setting an example for nation with regard to the method to be followed to meet the challenge. The best example is emanating from Northern Command where precautions are being taken while remaining on the job and also looking after such segments of the civilian population that need help. If the entire nation follows this example the Corona Virus challenge will met successfully.