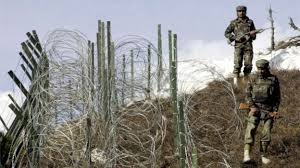 There is a large range of vandalism, violence and destruction being perpetrated by Pakistan in Kashmir. Its unholy repertoire includes terrorist attacks, cross border BAT actions, engineering of internal dissension/disruption, targeting of security forces, looting of banks, killing of innocent’s et al.

What India is witnessing over there is not a “hot summer” as many would like to eloquently put across. She is in the throes of an outright “State of War” declared by a foreign power. The objective of the enemy is to annex a piece of real estate which constitutes a crucial first step towards achieving the higher goal to dissecting the entire country.

It is well known that Pakistan is mortally scared by the vulnerability that a lack of strategic depth poses to its defence. It has, now, successfully overcome the problem by getting the war into Indian Territory in Kashmir.

The enemy has infiltrated the civilian population of its targeted area (Kashmir) with “Agents Provocateur” (Hurriyat) who, for personal gains, are inciting the locals against the state. They are also indulging in a host of other acts that benefit their masters while being detrimental to the sovereignty and integrity of the Indian Nation.

These Agents Provocateur are using unlimited supply of money from Pakistan and a religious angle to recruit locals who pass off as “militants” but are actually Pakistani soldiers operating in Indian Territory.

The incidents along the Line of Control (LOC) and attacks on military installations in the hinterland are not acts of terror; they are professional military raids being carried on by enemy soldiers on the Indian military apparatus, vital civilian installations and national assets with a definite military strategy in mind.

Those who are pelting stones are not misled, misguided youth. They are child worriers who have chosen to fight for the enemy in the war declared against the Indian Nation.

Those who are perpetrating violence in Kashmir are not “cowards” acting out of “desperation.” They are highly motivated soldiers of Pakistan out to do anything that it takes to destroy their enemy; using such dismissive words to describe them amounts to living in a dangerous state of denial.

Sadly, the Indian response is beset with dithering and procrastination which has creates an impression to the enemy of dealing with a soft and vulnerable adversary, incapable of absorbing the onslaught.

The fearlessness with which the war is progressing in the enemy’s favour is a result of the success that the enemy propaganda machinery has achieved in exhibiting its strength and strategic brilliance.

The latest act of mutilation of the dead bodies of two Indian soldiers, Naib Subedar Paramjit Singh of the Indian Army and Constable Prem Sagar of the Border Security Force form part of the shock and awe tactics that the Pakistan Army follows as a part of its overall war strategy.

By mutilating the bodies, Pakistan has done nothing that it has not done earlier. Such barbarity is the Islamic way of fighting a war and Pakistan has been following it assiduously since its inception as a nation.

The Indian response has been predictable! All the politically correct words to define the act- barbaric, despicable, brutal, outrageous etc. have been used along with assurances of “appropriate response.”  Most of the top rated defence experts of the country have churned out their pieces giving placid options and suggestions after expressing disgust.

This is exactly what the Pakistan Army wanted, the more India is seen howling and crying the more it can convince its people about its strength and invincibility.

A reaction of this nature is not going to get India anywhere. Moral lectures have had no affect on Pakistan earlier and are not likely to have any affect now.

Our fallen heroes would not like to be treated as objects of pity only because their head has been taken away by the enemy. One of the fallen soldiers was a Sikh and the Sikhs are quite used to such acts by the Muslims. Parading heads of fallen Sikh soldiers on spears was normal practice of the Mughal forces in the seventeenth and eighteenth century, when Sikhs were fighting to free their land and people from Mughal atrocity. The Mughal barbarity did not stop the Sikhs from fighting on relentlessly and ultimately decimating the Mughal Empire.

In this particular instance of mutilation the government need not worry about the “appropriate response.” The Sikh unit which has lost a soldier will definitely extract its pound of flesh. This armchair talk by a few queasy journalists and politicians is quite valueless.

More important than the “appropriate response” that the entire nation is waiting for with a bated breath is to understand and react appropriately to the situation obtainable in the region.

India is attempting to fight the battle within the domain of diplomatic and political righteousness. The situation has gone much beyond the usefulness of an approach of this nature.

The time for mollycoddling the perpetrators of these brutal, criminal and inhumane acts is long since over. There is no option left but to deal with them militarily.

The overarching need of the moment is to declare the country at a state of War with Pakistan in Kashmir. All those who have joined up with Pakistan need to be dealt with as enemies of the nation.

The army and other security forces operating in Jammu and Kashmir and the Kashmir Valley in particular need to be given a free hand to deal with the enemy, as they would do in a war. In this, they should enjoy full support of the government and the people of the country.  To remain indecisive now will lead to irretrievable damage to the nation.

(Jaibans Singh is a reputed columnist, author and Editor: ww.defenceinfo.com)