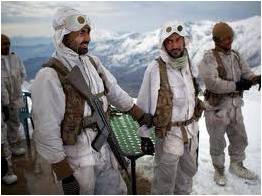 The current leadership of the country holds the capability of causing panic in many aspects of national life; law and order; terrorism; economic stagnation, environment, communal breakdown etc. In fact the list is long enough to confirm that every Indian rich or poor, big or small is living on the edge with an uncertain future looming in front. In all this what causes the maximum anxiety is the ominous shadow of a belligerent Pakistan. The small nation, already past the brink of disintegration, does not relent from causing as much harm as possible to India whenever and wherever the opportunity presents itself. Under the circumstances, lopsided policies of appeasement by the Indian government being followed primarily to keep a certain “friend” in good humour only add to the feeling of dread.

The latest bolt has come by with the resurfacing of rumours of a possible demilitarisation of the Siachen glacier. The matter has been debated upon for a long time now with the Army and certain nationalist forces standing firm against any such ill conceived move. Now, media is agog with speculation that the recent Track II initiatives are all about paving the way for this disastrous deal. It is being said that there has been a tacit understanding with regard to the modalities. The deal will possibly come by during a visit of the Indian Prime Minister Dr Manmohan Singh to Pakistan which is in the pipeline.

It is common knowledge that Track II initiatives between India and Pakistan are the brainchild of the United States, always eager to intervene into the bilateral affairs of any and every country more so in favour of its vassal states like Pakistan. In the wake of the Mumbai terror attack when the composite dialogue was stalled, a Track II initiative was sponsored by the US Ploughshares Fund. Most astoundingly, even under those circumstances where Pakistan had, with great deliberation and planning, launched a warlike attack on India there were some voices advocated authentication of the actual ground position and demilitarisation of Siachen as “achievable”. The Americans went overboard and called for the opening of an international science park as a United Nations Environment Programme. The advocacy of involvement of the United Nations was to convert the whole problem into an international dispute, something that was music to the ears of Pakistan.

That Pakistan has a deep interest in bringing about the process of demilitarisation is quite evident from the manner in which reports of the development are carried by its media. Not one opportunity to press home a word in favour of demilitarisation from an Indian is missed out by Pakistan in its coverage. In fact a major Pakistan daily, The Dawn, has gone to the extent of saying that demilitarisation is an Indian suggestion based on an indirect admission that the melting of glaciers is because of its military presence. This apart, vested interests are not averse to some shrewd media manoeuvring to create an impression on the subject that suits their contention, in this they find support from the Indian press also which is quite unfortunate

Media reports suggest that the agreement once reached upon would entail setting up a joint commission to delineate the line beyond NJ 9842; when the borders continue to be disputed what would be the sanctity of any such line drawn across a map? Can Pakistan, with its historic proclivity to go back on its word, be depended upon to honour any authentication of the existing ground position which is already disputed? There is also talk of punitive action should either side renege on its commitments; if there is any possibility of either side reneging from its commitment then why enter into a commitment at all?

There is also the question of internal political dynamics. With the credibility of the government at an all time low and assembly elections a year and a half away is it opportune for the government to take a huge decision of this nature, earn the accolades and leave it for the next government to clear the mess? Why is it that talks are on without taking the parliament and the people in to confidence? While following this path the government would be acting in total contravention to the advise rendered by the Army. General Bikram Singh, on assuming the appointment of Army Chief only a few months back made it very clear that the army would not support the process of demilitarisation without proper safeguards.

Why does the issue come up in some bizarre form or the other at regular intervals? After all, what in the realm of defence and security has changed between India and Pakistan that would open a window for discussing the said demilitarisation. Has conversion of the line of control into a permanent border been agreed to? Has Pakistan renounced the path of terrorism? What of the colonisation of Pakistan Occupied Kashmir with active connivance of China? What of the innumerable ceasefire violations carried out mostly to facilitate infiltration of terrorists into Kashmir? These two form covert manipulations, what all is being done overtly would be much more and quite shocking.

In fact, it would not be out of turn to suggest that there is no need to engage Pakistan in talks at all, leave aside a major initiative like demilitarisation of Siachen. India must remain firm in its resolve to abjure the process of dialogue till such time that there is a palpable shift in Pakistan’s policies. The global community should be called upon to support India in this righteous path whole heartedly. In the present context the issue of demilitarisation of Siachen raises some uncomfortable questions which negate the option as one fraught with political and security misgivings.