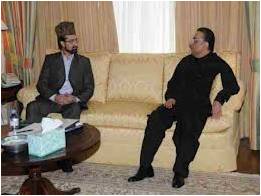 The last few months had witnessed considerable forward movement in diplomatic ties between India and Pakistan. Consistent rounds of meetings between the Foreign Secretaries and even Foreign Ministers of the two countries had created an impression that things will soon take a turn for the better. There was talk of a possible visit to Pakistan by Prime Minister Manmohan Singh in the near future, something that Pakistan has been lobbying for quite some time now.

The optimism has been, as usual, short lived and things seem to be sliding back to where they have remained stagnant for the last many decades. Pakistan President Asif Ali Zardari has, once again, set the proverbial cat amongst the pigeons so far as diplomatic relations between India and Pakistan are concerned. In this instance he has chosen an international forum to fire his salvo; during his address to the United Nations General Assembly on September, 25, the President dwelled on a number of issues regarding terrorism, democracy in his country, Palestine, Afghanistan, religion etc. For India he did not have any kind word to say even though there was scope for the same given the forward movement in talks and initiatives like the liberalised visa regime that has recently been put in place. Instead, he preferred to get back to the issue of Jammu and Kashmir. “We will continue to support the right of the people of Jammu and Kashmir to peacefully choose their destiny in accordance with the UN Security Council’s long-standing resolutions on this matter. Kashmir remains a symbol of the failures, rather than strengths of the UN system. We feel that resolution of these issues can only be arrived in an environment of cooperation,” he said. The statement, as expected, caused uproar and triggered a strong reaction from none other than the Indian Foreign Minister who, in the same forum, described it as “unwarranted’. This was followed by a series of reactions and counter reactions by the diplomatic representatives of the two countries.

The media has been describing the unfortunate incident as, “India-Pakistan sparring and verbal duel over Kashmir.” It is being seen merely as a part of the ongoing spat between the two countries which India should ignore in view of its high status in global affairs.

Is it prudent to brush off the statement in such an arbitrary manner? The question needs to be seen in the light of other related matters, actions and incidents. Last year, Pakistan did not make any provocative reference to Kashmir; Foreign Minister Hina Rabbani Khar had merely stated that Islamabad looked forward to resolving all outstanding issues, including Kashmir, with India. Now, not only has President Zardari made this contentious statement he has also held a meeting in the same venue with Kashmiri separatist leader Mirwaiz Umar Farooq on September, 30. During the meeting, he reiterated Pakistan’s continued support to the cause of separatism in Kashmir and invited the separatist leadership to Pakistan. In Kashmir, the separatists have been raising their rhetoric in the past few months; SAS Geelani is attempting to create a communal divide by making provocative statements on the management of the Amaranth shrine.

On ground, terrorist activity in Kashmir has seen a perceptible increase in the last few months with implicit evidence of the same being carried out with support of Pakistani authorities. On October, 01, a few days after the statement by the Pakistani President, five terrorists, all from Pakistan, were killed in a gunfight with security forces in north Kashmir’s Ganderbal district. Reports suggest that the terrorists had infiltrated into the Kashmir valley about a month back. There have been recoveries of large quantities of arms, ammunition and other war like stores from various parts of Kashmir; a major portion of these is of Chinese origin and yet in its original packing. This is, obviously, a part of the military assistance package that China has in place for Pakistan.

If one were to look at the picture in its entirety it would become quite apparent that Zardari’s statement implied much more than mere rhetoric based on some diplomatic necessity. It was part of a much bigger game plan that Pakistan now has in place so far as India and Kashmir is concerned; a game plan which involves coordinated efforts on the diplomatic, operational and psychological level to up the ante in Kashmir and onwards in the rest of the country.

Why would Pakistan want to do something like this at this stage? The answer is quite simple; post the withdrawal of NATO (US) forces from Afghanistan, Pakistan will need to restructure its policies to deal with the emerging situation. It will have to work towards maintaining its relevance in the South Asian region and also find ways to control the fundamentalist elements which will gain strength. Targeting India, especially Kashmir, will be the best option available under such circumstances. The resultant instability will open avenues for obtaining aid to finance what will be projected as a need to fight fundamentalists; at the same time, the fundamentalists will be kept at bay by diverting their attention towards Kashmir. What is happening now is the initial posturing of the overall policy that Pakistan is likely to adopt in the next few years.

Being aware leads to winning half the battle; India, therefore, needs to remain alive to this very potent threat and prepare itself to face the challenges as they emerge in the future. Above all, there is a need to stay vigilant against the possible increase in terrorist activity. If attempts to ignite terrorism are nipped in the bud then the rest of the plan will fall flat on its face. Once again the security forces and the people of Kashmir are likely to be called upon to face a huge challenge; their strength and resilience will be put to test.