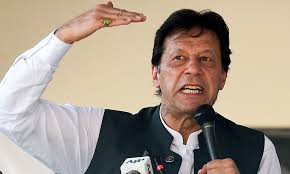 This year, Imran Khan, the “selected” Prime Minister of Pakistan, chose to celebrate the infamous “Kashmir Solidarity Day” in Pakistan Occupied Kashmir (POK). Predictably, a major part of his speech at Mirpur in POK was directed against India and specifically against Prime Minister Narendra Modi.  He said that, “200 million people of Pakistan and its battle-hardened army will teach India a hard lesson.” He also termed recent changes brought about in the Indian state of Jammu and Kashmir as a “mistake.” In the tail end of his speech, he gave a weak assurance to the people that Pakistan would always stand by the people of Kashmir and fight alongside them.

At Lahore Imran Khans PTI leveraged Kashmir Solidarity Day to project an anti-Hindu agenda. Banners showing PTI General Secretary for Lahore, Muhammad Usman, Imran Khan and Mohammad Ali Jinnah and saying, “Hindu Baat Se Nahin, Laat Se Manta Hai” (Hindu does not understand with words he understands with kicks) were put up across the city. They were later removed but, by then, the message had been sent out and the purpose had been served.

This orchestrated ritual was followed by an escalation of tension along the Line of Control in the Poonch region opposite Mirpur. Due to the ensuing cease fire violations in the sector, one brave Indian soldier lost his life and three were injured. The propagandist Pakistani information machinery was quick to put the entire blame on India; it termed the blatant violations as “retaliation against the targeting of civilians by Indian troops,” adding, for good measure, that ten civilians were injured due to Indian firing.

Having said his piece Imran Khan went back to his luxurious life and thus culminated the perfidious, propagandist game plan of Pakistan for the so-called Kashmir Solidarity Day, 2020. The hapless people of the occupied territories were left wondering as to why he came to address them in the first case.

Pakistan observes February, 05, as Kashmir Solidarity Day every year. It is an annual ritual since 1990 whose stated objective is to support the so-called struggle of the people of Jammu and Kashmir towards self-determination of their political status. In actuality, it is downright propaganda.

The reality is that the travails of the people living in these occupied territories remain hidden from the world because of media strangulation. Journalists, bloggers, civil rights activists are targeted for speaking and exposing Pakistan’s real face to the world. There is hardly any newspaper being published over there, what to talk of electronic media. The world gets to see only a few video clips that are smuggled out and shown by freedom fighters of the area living in exile across the globe. The brutality of the establishment is clearly visible in these footages; people are seen protesting in vast numbers against the atrocities being heaped upon them.

Pakistan also claims a cultural and ideological bond with the people of the state. This too is a fallacious claim. Jammu and Kashmir comprises of people with different ethnicity in its three regions of Jammu, Kashmir and Ladakh. So, how can Pakistan being an Islamic state claim cultural affinity with all of these regions?

Besides this, what solidarity can Pakistan foster when it is itself in the throes of an existential crisis? Even as Imran Khan was making his speech, the International Monetary Fund (IMF) was being begged by leading economists of the country to go soft on its demand of increasing taxation, power tariff and interest rate in order to expand the narrow tax base. The reason given for this appeal was that such an action would further erode the political capital of the ruling party which is already in the eye of a storm due to burgeoning inflation. Opposition parties are baying for Imran Khan’s blood in view of the skyrocketing prices of food items. The charge is being led by Bilawal Bhutto who makes no bones of referring to the Prime Minister as “incompetent, incapable and selected.”

Imran Khan is projecting himself as a fearless leader ready to face any form of conflict with India. The fact is that if the two countries get into a military face-off, Pakistan will be financially ruined within a week. India too will suffer but she has the resilience to tide over the crisis. Further, India has the capacity to go in for a stretched out conflict which is not the case with Pakistan.

Imran speaks of battle hardened troops but what of morale? It is no secret that the extension given to General Bajwa, which now stands ratified as Army Chief till November 28, 2022, has not gone down well with the army rank and file, especially, the senior leadership. In order to save his extended tenure General Bajwa resorted to a purge in the senior levels with many Generals being told to “resign.” Now there are disturbing reports of Major General Asif Ghafoor, recently removed from the all important post of Director General Inter Services Public Relations (DG ISPR), meeting with a serious accident along with his wife. Both have reportedly been sent to Saudi Arabia, ostensibly for better treatment but could also be in order to keep the matter under wraps.

India is well within her rights to discuss all options, including use of force, to take back from Pakistan the occupied territories,. Imran Kahn would be well advised to opt for a balancing act and looks for ways and means to resolve the issue peacefully. His hostility and outlandish statements against India are definitely counterproductive.

(Jaibans Singh is a Geo-strategic analyst, writer and commentator)