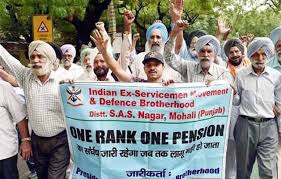 The OROP agitation by veteran soldiers is raging on; the strange and unbelievable procrastination by the Government of India (GOI) in failing to stand up to its commitment is creating an extremely difficult situation. This ire of the veteran soldiers is entirely justified when seen against the backdrop of the promises made by the Bharatiya Janata Party (BJP) during last year’s general elections.

Given the pressure on the government, it can be safely deduced that the OROP award will be given in due course. The point is whether this will happen before irretrievable damage is done to the security of the nation.

Issues much bigger than the award itself have cropped up in the wake of the agitation.

It has been universally accepted since time immemorial that wars are fought and won, not by weapons and equipment, but by the soldier on ground.  There are innumerable examples where less equipped and smaller armies have routed forces larger and better equipped than themselves.

In the wake of the OROP agitation, a message is going out that India, despite being a rich and powerful country, is not ready to spend a measly amount for the wellbeing of its soldiers. How then would the country build have a capable “man behind the machine” to defend itself? The nations capability to fructify its aspiration to become a global power will be questioned.

One can almost feel the sadistic glee of the Pakistan Army and the Peoples Liberation Army (PLA) of China at this unfortunate turn of events. There is no military general worth his salt who would not plan to exploit such an obvious weakness in the enemy’s armour. This is exactly what our adversaries would now be planning feverishly.

It is not necessary that they will attack immediately; conflict in the present context is played out over decades and across multiple domains.

Pakistan’s Inter Services Intelligence (ISI) would have already worked out a massive propaganda campaign on the theme of this weakness in concert with its jihadist assets. Militants being prepared to infiltrate into India will be indoctrinated with examples low morale in the Indian forces. These masochist monsters will make fun of Indian soldiers to drive home their point.

Imagine the likes of Hafiz Saeed and Syed Sallahuddin addressing huge rallies in Pakistan and saying that India has lost the will to resist the Jihadi onslaught and it is time for the “Mujahideen” to move in for the kill.

A second point of concern is the repercussion that the existing face-off will have on recruitment in the Indian Army. Since time immemorial, India has had a tradition of certain communities sending their sons to the armed forces. These communities were termed as Kshatriya in ancient Bharat and “martial races” by the British. As things stand, the intake from such martial races is declining by the day. Punjab, which was the bedrock for military service, is unable to fill vacancies in the class composition fighting units, such is the deterioration.

Now, after seeing his old grandfather and father rotting in the heat at Jantar Mantar for the sake of a measly pension, no son will think of joining the armed forces? Those from a non-military background planning to join the armed forces will also be similarly dissuaded. Today’s generation is very aware and evolved; it will simply look for other options.

The third negative fallout is the divide in the ranks of the soldier community that this unfortunate development has brought about. Already there are some areas where serving soldiers have resisted the OROP agitation. Media has not carried this news, yet it has proliferated like wildfire on social media.

The august institution of army chief, already under fire for the last few years, has taken yet another massive hit.

Soldiers die for honour and tradition; honour of their country, their regiment and their family. They get motivation from their regimental tradition of courage as exemplified by those who served and fought before them. With a veteran-serving divide gaining unacceptable proportions what will be left of this tradition? If the veterans are reduced to pathetic beggars what would be left of honour?

The problem lies not in the inability of the government to come up with a solution, it lies in the inordinate delay in decision making. If the government did not have the money, the political leadership should not have made a commitment. Once the commitment has been made then it should be implemented. There are some areas where politics cannot and should not be played, the armed forces is the most important of those.

The armed forces of Britain are a shadow of their earlier might, still, the scions of the royal family put in military service. In the United States, respect for the soldier and the national flag is taught to children even before they go to school. It is for this reason that the white race has dominated the world for many centuries.

India remained subjugated for so many centuries because its political leadership was divided, strategically uninformed and vacillating. This weakness was exploited by foreign powers. Unfortunately, we have learnt nothing from history and are treading the same dangerous path yet again. Two Union Ministers cannot sit together and resolve an issue of great security importance.

The government should never have allowed the matter to escalate to the existing level; national security is not a matter to be played around with. Now, even if the OROP comes by the damage would have been done. What has to be considered is damage assessment and control to whatever extent that it is possible.