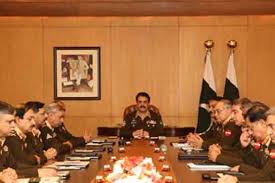 The Pakistan Army is back to playing its dirty games along the Line of Control (LOC) and International Border (IB) with India yet again. In a parting gift to its outgoing Chief, Gen. Raheel Sharif, it has ambushed an Indian patrol on the Indian side of the LOC in the Machil sector of the Kashmir Valley on Tuesday, November, 22.

It is being appreciated that the decadent act was carried out by a Pakistani Border Action Team (BAT) that could have comprised of militants, Rangers and Pakistani troops; a large body of troops determined to cause maximum harm to the Indian patrol.

The Indian patrol that was carrying out a routine counter infiltration operation retaliated in a courageous and professional manner that greatly reduced the casualties even as three Indian soldiers died a heroic death.

As is the practice of such Pakistani a contingent,  it mutilated the body of one Indian soldier before scurrying back to its own territory.

The Pakistani practice of mutilating bodies of fallen soldiers causes considerable revulsion and disgust across the world. It is a practice which insults the noble profession of arms that has a universal covenant in conduct of honourable warfare running back to ages. This covenant has been laid down in writing as the Geneva Conventions in modern times. The conventions specifically forbid such barbaric practices and lay down rules for providing dignity to corpses of enemy soldiers.

The Pakistani military leadership looks upon the Muslim and Mughal rulers of the subcontinent as their role models more than the Geneva Conventions and other soldierly caveats. They name their most potent missiles after Muslim invaders and raiders like Mohammad Gouri and Babar. These rulers considered torture, beheading and other such barbaric practices as normal to instil fear in the oppressed people.

Muslim Governors of Punjab in the 18th and 19th century routinely cut the heads of Sikhs, who raised the flag of revolt against their oppression, and paraded them on spears through the towns.

In consideration of the above, the mutilation practice being followed by the Pakistani Army does not come across as surprising. What Pakistan is not realising is that it was such barbarity that led to the downfall of the Muslim and Mughal rule and the rise of the Sikh Empire. Pursuing such ungodly practices will lead to the disintegration of Pakistan sooner than later.

Whether the barbarity has the consent of the Government and the people of Pakistan cannot be legislated and is also inconsequential since they do not matter in the dance of death being played out by the Pakistan Army against India.

India, therefore, should remain prepared to face such acts by the Pakistan army and its militant stooges, however revolting they may be.

For the Indian Army to react in kind would amount to falling down to the immoral and unacceptable level to which the Pakistan Army has degenerated itself. However, military retribution for such acts has to be swift, profound and over reaching.

Pakistan has been consistent in denying the surgical strike that India carried out against terrorist camps located in Pakistan Occupied Kashmir (POK) on the night of September, 29.

This is because the military leadership of the country has been consistently feeding the people with stories of herculean Pakistani military power as against the docility of the Indian leadership and the Indian Army. The propaganda machinery of the army has built a larger than life persona of Gen. Raheel Sharif, portraying him as a military genius for his handling of internal strife in Pakistan and domination of the military narrative against India. The leadership stood openly shamed due to the intensity of the Indian surgical strike.

The desperate escalation of violence all along the IB and LOC post indicates desperation on the part of the Pakistan Army, especially the outgoing chief, Gen. Raheel Sharif, to resurrect the lost image.

It also redeems the fact that the Indian strike was held and puts paid to Pakistani denial as a blatant lie.

Beyond the tit-for-tat and brinkmanship there is a need to search for peace. While military actions along the border are required to continue, they need to be viewed in the tactical domain with all freedom to the Army to act and react in a befitting manner. This is necessary since Pakistan is unlikely to see reason without being inflicted with military punishment of levels that it cannot sustain.

Alongside the military activity, India being the larger country with an overreaching global influence needs to strategise a multi-pronged approach to break the status quo.

The intransigence and barbarity of the Pakistan Army has to be exposed to the world and international pressure has to be exerted on the country to rein in its obtuse and fundamentalist military generals.

There is a vast constituency within the country, including its prime minister, which does not subscribe to the masochist antics and attitude of the Pakistan Army; there is yet another and bigger constituency over there which, under the garb of internal security, is being brutalised by the Pakistan Army.

These elements need to be leveraged by the Indian Government to rein in the Pakistan Army. All channels have to be opened to achieve such an objective considering that the Pakistan army is not a push over which would succumb to light pressure.

It is time to realise that the situation is too serious to be dealt with some media sensationalism at the time when an incident takes place, which is far too often.

If things continue the way they are, an all out war may become inevitable. Such an eventuality will cause harm to India but the poor people of Pakistan, already suffering on multifarious fronts, will be totally devastated.

For the sake of humanity such a situation needs to be avoided at all costs. The values of an ancient civilisation like India call for a sober and mature approach to deal with the very sensitive situation.

(Jaibans Singh is a strategic expert and commentator)