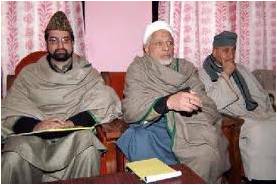 The fortunes of brand Hurriyat witnessed a solid nosedive in the year gone by, despite which, the conglomerate managed to stay afloat by some energetic manipulation of the media and orchestration of disruption when an opportunity presented itself. The first major initiative by the Hurriyat was in March, 2012, when the chairman of the conglomerate, Mirwaiz Umar Farooq, attended the meeting of the Organisation of Islamic Countries. This is a regular pilgrimage undertaken by the Mirwaiz, hat in hand, to garner support. This time round he demanded from the organisation practical steps towards “internationalising the Kashmir issue,” while delivering some eloquent but wholly unsubstantiated expositions on human rights violations in Jammu and Kashmir. As in earlier occasions, representatives of the countries in the organisation gave to him a patient hearing, made the right noises and immediately set aside the issue. Why the Mirwaiz wastes his time in such futile endeavours is a big question; probably he enjoys the sojourns’ abroad.

Syed Geelani, true to form, waited for the tourist season to culminate before kicking off his protest schedule. This time round he chose the proposed development activity at the holy Amarnath shrine as the first salvo. His faction went into hyper mode to deride the proposal to improve the track to the holy cave as directed by the Supreme Court. Geelani made some bizarre insinuations like plans to change the demographic pattern, untold damage to reserve forests, the project being a precursor to building an Amarnath city in the area etc; he went on to announce a massive agitation after Eid. Sadly for him, the Mirwaiz faction refused to extend support and stated that he should have consulted them before announcing the stir.

The vitriolic campaign was effectively countered by Chief Minister Omar Abdullah by taking media personnel on helicopter to see for themselves that no forest land had been jeopardised. The chief minister also made an offer to Geelani to oversee the area in a helicopter with a photographer of his choice to determine if any forest land had been encroached upon or forest cover destroyed. This took the wind out of Geelani’s sails and the whole drama ended with advantage Omar. Once again Geelani’s rabble rousing came to naught.

A major boost came the way of the Hurriyat when the visiting Pakistani Foreign Secretary Jalil Abbas Jilani chose to confer with the conglomerate even before meeting his counterpart in India. That the Indian government allows such things to happen amounts to taking things a bit too far. Be that as it may, the Hurriyat responded with alacrity by and took a spate of actions to register their presence and impress their fund managers. Jamaat-e-Islami in Kashmir, ably supported by the Hurriyat Conference, gave a Fatwa directing tourists in Kashmir to follow a “proper dress code”; this drew howls of protest from the business community of the valley and the faction was forced to beat a hasty retreat. Mirwaiz Umar Farooq then warned the State government against giving a boost to tourism from Israel to the Kashmir valley. Despite all this, ostensibly, not much came out of the meeting with Jilani. What transactions, financial or political, took place behind the closed doors is anybody’s guess?

The Mirwaiz then took the opportunity presented by a large number of ceasefire violations by Pakistan in October, 2012 to reiterate his oft repeated demand for demilitarization of both sides of the line of control. The matter did not generate much excitement due to its intrinsic impracticality. The fact that Pakistan is not relenting from its nefarious military designs offers a clear case for enhancing troop activity rather than going in for a cut. If anything, the Mirwaiz should have urged Pakistan to take the first step towards demilitarisation and seen for himself the disdain of his friends to such ideas. In any case, Pakistan was indifferent to his statements.

The encore for the year was the much touted visit of the conglomerate heads to Pakistan. Dissidence within the group was palpable much before the visit was formalised. The contrarians were led by Geelani who was quite piqued by the lukewarm invitation that he received from the Pakistani authorities and he tried his best to derail the visit, albeit unsuccessfully.

The host Nation laid out a well packed itinerary including meetings with the President, Prime Minister, Foreign Minister, leader of the opposition etc. Interaction was also slated with the puppet President and Prime Minister of Pakistan Occupied Kashmir. At the end Pakistan had nothing more than some good words to offer. The Mirwaiz spelled out the main purpose of the visit as stressing on Islamabad the need to bring Kashmir back on its agenda; this thought process did not find any takers in Pakistan. It is also being said that the Pakistan government urged their guests to work things out with India.

Quite embarrassed and considerably chastened by the way things unfolded in Pakistan the Hurriyat is now preparing grounds to meet with Prime Minister Manmohan Singh. According to some media reports, probably planted by the Hurriyat itself, a meeting with the Prime Minister may take place on January, 17, 2013; this of course is to be seen to be believed.

It is quite evident that the conglomerate is beset with internal dissensions and policy paralysis against the backdrop of a massive peoples mandate against its ideology. It has also failed to ignite emotions as was the case earlier. The final setback is dilution of support from its all weather mentor- Pakistan. The neighbouring country, gripped by internal strife can barely keep alive its “moral and diplomatic” support; in real terms, the unending flow of funds by fair means and foul is severely restricted as is the heavy rhetoric in international forums of undying support to the Kashmir cause. That the Hurriyat stands isolated in the political landscape of Kashmir is there for all to see; unfortunately the Hurriyat itself is not ready to come to grips with this reality.