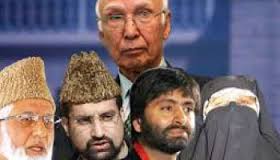 The Kashmiri separatist entity, All Party Hurriyat Conference, wants the world to believe that it controls the political narrative in Kashmir and enjoys massive popular support for its movement and ideology.  This impression is created by churning out protest calendars, giving calls for lockouts and then posting cooked up stories and pictures in the many avenues of paid news that it controls.

An added flavor comes by showcasing a supposed rise in public disaffection with the Indian union as manifest with increased terrorist activity and its engineered social disruptions.

A closer look at the situation and the environment in the Kashmir Valley, however, has a different story to tell.

The United Nations Security Council Resolution 47 concerning the Kashmir conflict after protracted negotiation finally led to ceasefire on 1 January 1949 and approval on 5 January 1949. It has, for long now, been established that the resolution is redundant and would not, by any means, address the issue – if there is one at all.

The Hurriyat does not wish to read the writing on the wall, therefore, on January, 5, this year its leadership, as in the previous years, focused on the redundant resolutions. “Even after seven decades these resolutions are a viable and provide a peaceful and durable solution to this vexed and long standing issue,” said Hurriyat leader Syed Ali Geelani in a desperate show of his incapacity. The official statement issued by the Hurriyat called upon the new UN Secretary General, Antonio Guterres, to make serious efforts in bringing peace and stability in the region.
There was no reaction whatsoever to the Hurriyat initiative except for a miniscule coverage in some Kashmir centric newspapers whose alignment and source of funding is suspect. It seems that the entire world, even Pakistan, has moved on so far as this subject is concerned but the Hurriyat is not willing to let go.

It was expected that the separatists will create some disruption on Army Day on January, 15, to play upon the anti-army propaganda that they have been attempting to create. Yet, there was no upheaval!! It cannot be that the Hurriyat did not try – quite obviously it was unable to get the people to come out against the army.

The Hurriyat next attempted to play up the alleged killing of civilians at Gawkadal Bridge in Srinagar on 21, January, 1990, by a contingent of the CRPF. It is being conveniently forgotten that the unruly crowd pelted stones and posed a grave danger to the soldiers who were not as equipped to deal with the situation at that time as they are now. They had no option but to fire which led to casualties.

In fact, the Hurriyat was in two minds about marking the day for protest, since it had not been eliciting mush response in previous years. It was excluded from the initial calendar and then put is as an afterthought when some constituent members raised objections. The Bandh call, predictably, elicited a lukewarm response in Srinagar with shops closed more out of fear of the Hurriyat goons than any other reason.

The “Black Day” on 26 January was a complete failure with people participating in the Republic Day celebrations with great gusto across the valley and the entire state.

Pakistan’s ritualistic observance of “Kashmir Solidarity Day” on February, 05 went on as scheduled but was more lackluster than ever before. Prime Minister Nawaz Sharif made a statement which was limp and uninspiring. The people of Pakistan Occupied Kashmir, however, came out in large numbers on the day to protest against the atrocities of the Pakistani regime.

The month of February witnesses a disgusting exploitation of the deaths of Maqbool Bhat and Afzal Guru by the Kashmiri separatists to further their evil agendas. Hurriyat called for a complete shut down on February 9, the anniversary of Guru, and February 11, the anniversary of Bhat, and marching from Lal Chowk to the United Nations (UNMOGIP) office at Sonwar on February 10.  Stringent calls to maintain unity for the separatist cause are being made as before. The call elicited a no response from the people!

This lack of response has a good reason behind it! The people of Kashmir fully understand that Afzal Guru and Maqbool Bhat are brought out of the closet by the Hurriyat with an eerie regularity every year in the month of February and forgotten as soon as the Bandh and the march to the UNMOGIP are over and done with.

The protest calendars’ normally move around alleged atrocities and killing by security forces over the years and the same was there to see in the last two weeks of February too.  An attempt was made to highlight allegations of encounters at Narbal and Dodipura etc. Hurriyat even raised the Godhra issue to whip up communal passions. All of these calls received no response whatsoever.

The writing on the wall is quite clear – nothing much is happening in the Kashmir Valley since the beginning of this year by way of Hurriyat sponsored protests are concerned. When it becomes necessary, people shut down for a few hours to facilitate the conglomerate to go through its photo opportunity and then it is business as usual.

The security forces, on the other hand, are achieving great success in counter terrorist operations being launched on the basis of specific intelligence provided by the locals themselves.

The situation has taken a turn in this direction because the people are fed up with the protest calendars being issued by the Hurriyat and they ignore the same to whatever extent possible. It is time for the Hurriyat to appreciate the true aspirations of the people it professes to represent and change its policy to what would truly benefit the region, an inability to do so would lead to its isolation and irrelevance.