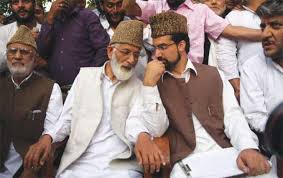 On December, 10, the world will celebrate Human Rights Day. This date coincides with the adoption and proclamation of the universal declaration of human rights by the United Nations General Assembly’s in 1948.

In Kashmir, the day is normally marked by protests orchestrated by the Hurriyat Conference, a miniscule separatist segment in the Kashmiri political landscape that attempts to project the fallacy of the Indian state as an oppressor of human rights. Its fallacious attempts have not elicited any results so far. This year, it has decided to up the ante by spreading the disruptive activities over a week from 3, December to 9, December and then culminate the deceptive narrative on the Human Rights Day.

In its itinerary will be some candle light vigils, a sit-in or two especially so outside the United Nations Military Observers Group headquarters in Srinagar, some seminars, street protests and such like disruptive and provocative activities aimed at a vocal round of India bashing.

Sadly, the conglomerate holds a subjective posture on the sensitive issues of human rights, due to which, the so-called protests invariably end up being what can be best described by Shakespeare’s famous lines, “full of sound and fury but signifying nothing.”

The issue of HR violations by terrorists has plagued Kashmir ever since the advent of foreign sponsored terrorism in the state. Highly respected personalities like the devout Mirwaiz Mohammad Farook, separatist leader Abdul Gani Lone and several others were not spared by the terrorists. They were brutally murdered despite being unconditionally committed to the cause of self determination. Surprisingly, the Hurriyat has never criticised these cold blooded and senseless murders; it has, instead, alleged that these luminaries were killed by Indian security forces and intelligence agencies. If the aim of the Hurriyat was to malign the security forces and the Government of India, then its plan misfired very badly as its allegations were never accepted by the people of Kashmir or the international community.

The Hurriyat sees a HR violation when the security forces fire at a mob trying to help an armed terrorist escape, but it does not consider the abduction and killing of innocent Kashmiri’s as cases deserving strong condemnation.  Terrorists have also been resorting to killing of Kashmiri Police personnel and Kashmiri soldiers in the most brutal and sadistic manner. Mohammad Ayub Pandith, a 57 year old Deputy Superintendent of Police was lynched by an irate mob outside Srinagar’s Jamia Masjid, on 23, June, 2017, an evening preceding the holy occasion of Eid al-Fitr. One month earlier in May, 2017, terrorists brutally murdered Lt. Umar Fayaz, a young Kashmir Army officer from Shopian who was not even posted in Jammu and Kashmir and had gone on leave to meet his family. Another brave Kashmiri soldier of the Indian Army, Aurangzeb, was also abducted and killed by terrorists in June this year when he was off-duty and going home to spend Eid with his family. Will the Hurriyat protest against such atrocities and cruelties perpetrated by terrorists upon its Kashmir brethren whose only fault is that they have taken on Government service as a profession and are merely doing their job to sustain their families?

The Hurriyat puts each and every action of security forces through minute scrutiny while turning a blind eye to the misdeeds committed by terrorists. It is very prompt in ordering shutdowns to protest against the killing of terrorists in encounters and has been falling backwards to organise misleading events like the ongoing Human Rights week, but it becomes a mute spectator when innocents are killed or injured by terrorists. All such actions embolden the terrorists who have made life hell for the common man in Kashmir.

The Hurriyat wants the world to believe that terrorists are Mujahedeen – noble souls who are putting their lives at stake for the sake of the oppressed Kashmiri’s. However, the gruesome manner in which terrorists have been murdering civilians on mere suspicion of being informers and endangering lives of civilians by using cover of crowds to attack security forces belies this claim. The Hurriyat’s repeated attempts to bail out terrorists harming innocent civilians by shifting blame on the security forces has been done so often and in such a shoddy manner that now no one takes such accusations seriously.

What Kashmir needs is honesty and sincerity! It cannot be denied that the Kashmiri people have faced certain violation of the rights in this period of turmoil marked with the foreign sponsored gun culture. Even being incessantly checked on the streets is a violation of human dignity. Undoubtedly, the people have suffered immensely in the sad situation thus evolved.  The fact of all of this being an outcome of the advent of terrorism which led to the establishment of a security dragnet to challenge the same cannot be overlooked. Both aspects have to be considered in tandem.

The complete lack of concern that the Hurriyat leadership exhibits whenever terrorists commit acts of violence against innocents is what raises serious doubts regarding the sincerity of this separatist amalgam towards the people of Kashmir. When the Hurriyat is openly following double standards on the issue of human rights violations then how can it expect the world community to take note of its protests? If the conglomerate wants the world to believe and take notice of what it then it should to take an objective view and have the moral courage to condemn all violent and brutal acts with equal vigour, irrespective of who the culprit may be!

Leaving aside the Hurriyat, on Human Rights Day, the Indian nation needs to stand as one to take a solemn oath to do whatever is possible to wrest the beautiful land of Kashmir and its people from the foreign sponsored shadow of the gun. A consolidated effort in this direction that involves the people, the government and the civil society is bound to accrue positive results.

(Jaibans Singh is a defence expert, columnist and author)