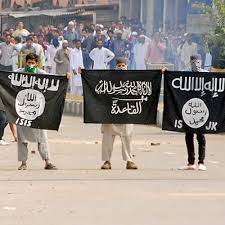 Hoisting of Pakistan and ISIS flags in the Kashmir valley has been generating considerable media footage and television debate of late. News channels have been carrying visuals of the flags being hoisted in political rallies and congregations followed by highly charged discussions.

Hoisting of Pakistan flags in the Kashmir valley is not a new phenomenon; it has been going on since before the television revolution hit the Indian viewers.  It is a well established political posture of the Pakistan sponsored separatist movement in Jammu and Kashmir. Its importance for the separatist cause is derived from the fact that such acts draw maximum funds from the financers of their convoluted movement. Hoisting of ISIS flags is, of course, a new phenomenon.

It is also an activity that garners maximum publicity for the separatists which provides the much needed oxygen to their otherwise dwindling movement. The more people speak, write or telecast the activity, the more the separatists get into the limelight.

Flags are made at the homes of the separatist cadre and waved by young boys with covered faces, who perform the act for a small monetary incentive. Thus, with insignificant cost the separatists succeed in establishing the relevance of their movement before their sponsors in foreign countries and keep themselves afloat.

The activity is well coordinated with elements across the border, as is evident from the alacrity with which the photographs and the reports are carried by the Pakistan media, especially the Urdu press and the television channels. “Pakistan flags hoisted in Indian held Kashmir” scream their headlines, while the likes of Hafiz Saeed make fiery speeches to con more and more uneducated Pakistani youth into joining their mercenary organisations.

What the media and the foreign sponsors of the separatist movement do not understand is that the incidents are carefully choreographed in select places in a manner that projects a mass movement. The situation on ground is, however, in total contrast to what is being projected.

The flag hoisting takes place only during separatist rallies, predominantly in downtown Srinagar and mostly after prayers at the Jama Masjid of Srinagar city. The downtown of Srinagar city does not, by any means, represent the sentiment of the Kashmiri people as a whole.

There are some other benefits that accrue from this activity, it helps provoke the security forces, raises passions within a crowd, instigate stone pelting and cause insecurity among the Shia population of the valley. Notably, that the valley has a thirty percent Shia population whom the Sunni separatist leadership wishes to subdue.  The flag hoisting is also viewed as a means to distract the investigating agencies; divert their focus from cornering the weakened Hizbul Mujahideen by engineering a wild goose chase behind a non-existent ISIS.

All is, however, not well with this game plan; the eagerness to bring in the ISIS is challenging the interests that Pakistan’s Inter Services Intelligence (ISI) has nurtured over so many years. The ISI has, therefore, instructed its stooges to stop the process as soon as possible.

It is for this reason that Syed Geelani is now bending backwards to isolate himself from the ISIS flag hoisting. He has openly stated that the so-called Kashmir issue has nothing to do with the agenda and policies of ISIS and other organisations like it. In his typical style he has attempted to put the blame on the Government of India.  “New Delhi is using it (ISIS flag hoisting) as a tool at the global level to convey a message that the struggle in Kashmir is not for right of self-determination but a problem of terrorism,” he is reported t have stated.

Geelani is getting desperate since the followers of his deputy, Masarat Alam, have sensed the chink in his aging armour and are now increasing the visibility of ISIS flags in downtown, Srinagar. It is for this reason that a few days back, on June, 28, he has openly called actions of the ISIS and Tehreek-e-Taliban Pakistan un-Islamic.

The ISIS is universally accepted to be the most brutal of Jihadi organisations ever. Recently this evil organisation has beheaded two women in Syria on charges of “sorcery.” Can it get more vicious than this? Even the Afghan Taliban does not wish to have any association with the ISIS and is fighting the latter’s ingress into Afghanistan tooth and nail.  Fierce fighting between the two militant ogranisations has been reported in the Nangarhar province in eastern Afghanistan.

Would any right thinking person in Kashmir wish to have any kind of association with such an organisation? The answer is a big NO!! By initiating this sinister plan the separatists have hit an all time low and are bound to lose whatever little respect they command from the people of Kashmir.

So far as the ISIS is concerned, let alone a foothold it will never be able to even look towards Kashmir, the people and the security forces will ensure this.

The most unfortunate victims of this evil design are the boys who are being used for the flag carrying and flag waving. They are too young to understand that meaning of what they are doing; they have no ideological affinity with the cause that they are unwittingly lending support to. It is they who come in the eyes of the law enforcing agencies and carry the risk of being branded terrorists. It is reported that 12 youths have already been identified by security agencies for allegedly raising the flag of ISIS in Kashmir in the recent past.

What remains most disgusting and abhorrent is the low level to which the separatist leadership has stooped to by exploiting young, innocent boys in their early teens for their selfish ends. The fact that all this is being done with the tacit approval of some of the most esteemed religious leader of Kashmir makes it even more unfortunate.