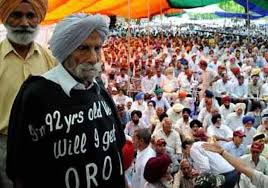 On September 5, 2015, in response to an agitation by retired soldiers of the Indian Army, commonly called “veterans” for a better deal in their pensions, the Bharatiya Janata Party (BJP)- led National Democratic Alliance (NDA) government announced the acceptance of the One Rank One Pension (OROP) scheme.

There was much celebration, in certain quarters only, on acceptance of a demand of Indian soldiers that had been held back by governments led by both the Congress and the BJP.  Among the veterans and the defence services fraternity, there was a sense of disquiet, since it was largely perceived that the award given was not in consonance with the definition of OROP.

While Union Finance Minister, Arun Jaitley, has recently delivered the third budget of his government and the second full fledged one, the veterans continue to wallow at Jantar Mantar, New Delhi, since their OROP demand has neither been met nor implemented in letter and spirit.

It would be fallacious to think that the NDA government would not be concerned about the continued impasse on this sensitive topic for which it feels it has walked the extra mile. The agony of the government would be propounded by the fact that Prime Minister Narendra Modi has always held the country’s armed forces in very high esteem.

No better example of his feelings can be given beyond the fact that his spends Diwali, the most revered festival of the Hindus, with Indian troops on the border.

At this stage, when the impasse remains an embarrassment even after the passage of three budgets, it is time to see if there is a way out of this logjam.

The OROP order, as it stands, is re-fixing pension on the basis of the calendar year as 2013; it also envisages re-fixing of pensions every five years.

The prime objective of seeking OROP is seeking parity in pension for all defence forces retirees in their particular rank to an acceptable extent.  A five year revision scheme will only increase the gap in the parity sought.

The apprehensions of the veterans and even the serving personnel of the defence services stand further aggravated by the position on the subject taken by the 7th Central Pay Commission (CPC)  that, in its recommendations, has failed to cater for traditional compensation granted to defence personnel to cater for their truncated careers.

The idea is to bridge the massive gap between civilian and defence retirees. As things stand now, the defence personnel are at a disadvantage vis-a-vis their civilian central government counterparts in terms of life time earnings due to early retirement further compounded by aborted pension.

Since the pension of current retirees is passed on to the past retirees through OROP, the position of the 7th CPC will adversely impact the effectiveness of the OROP scheme.

Unlike the OROP scheme for defence pensioners, a similar scheme recommended by 7th CPC for civilian/CAPF personnel, is superior, especially since it has no conditions regarding applicability.

All seemingly complex issues have an inherent simple solution. In the case of OROP, there is a simple solution in case the government can muster the courage to implement the same.

The government can easily grant pension based on maximum model instead of average, and award revision of OROP biennially instead of five yearly. By so doing, the government will conform to the OROP definition.

In fact, by applying the aforementioned principle of calculation, the government will save itself from the accounting complexity of maintaining two sets of Dearness Allowance (DA) rates i.e. one rate for past defence retirees and a second one for the more recent cases.

Accountants will agree that maintaining two kinds of pension tables for past retirees, one as per OROP and the other as per erstwhile modified parity table would be a nightmare to say the least.

The issue of personnel who opt for discharge at their own request, after completion of colour service, of course, needs to be removed in totality, since it violates existing regulations. In this regard, Defence Minister Manohar Parrikar has already given a positive clarification. As such, the revocation should not pose any difficulty for the government.

The 7th CPC reward is likely to be implemented by the government with effect from  January 1, 2016. Therefore, in addition to seeking improvements in the current OROP scheme, as discussed above, there is a simultaneous requirement of seeking modification in the erroneous/flawed pension related proposals submitted by the commission.

One can only hope that the government, on its own, or through the one member Judicial Commission headed by Justice L Narasimha Reddy, will keep the aforementioned issues in mind, and especially look into further anomalies that the 7th Pay Commission can possibly create.

There is an urgent need to bring closure to the national embarrassment of having our veterans sitting in Jantar Mantar indefinitely.