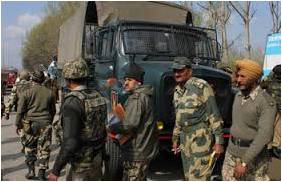 It is very unfortunate that Jammu and Kashmir had to witness, in the holy month of Ramadan, an incident of violence in Gool, Ramban that has led to the death of four civilians and injury to about 42 persons. In the aftermath, divisive forces directed their full might towards mobilising a mass protest, this time not only in the valley but also south of the Pir Panjal. The administration has been left with no option but to respond to the challenge posed by the divisive, separatist forces for which the State machinery has been mobilised.

Reports indicate that the State government was aware of the existence of subversive groups, charged with the responsibility of creating social discord, by spreading rumours and engineering incidents that would raise passions in the religiously charged environment of the ongoing Shri Amarnath Yatra and Ramadan. Intelligence agencies have been on the look out to identify and arrest these groups; it seems that one amongst them hit a bull’s eye in Gool, Ramban before it could be cornered. The rumour about desecration of the holy Koran was spread in a well planned professional manner and it successfully raised sentiment to the level of mass hysteria.

The area where this subversive operation has been launched has been chosen with great deliberation. It has many benefits for the forces of subversion. First, subversion in this region would get into the ambit of separatism an area that has witnessed absolute peace and calm for a long time now; the people of Ramban, Gool, Dharam etc have long since forgotten the times of terrorism; very naturally a need is being felt to reignite the fire over there. Second, it would spread the disruptive agenda south of the Pir Panjal which has not happened during the past decade, especially so, during the turmoil ridden 2008-2010 period. Divisive forces now realise that creating havoc in the valley is not sufficient since a majority of the population there now openly refuses to get drawn into the disruptive activity; in fact, there is great resistance and at times open belligerence against the same, hence the need to increase the range. Third, the agitation spread along the national highway, short of the Jawahar tunnel, would impact the Shri Amarnath Yatra and raise the Hindu sentiment. A brilliant operation of this nature has a definite signature of Pakistan Inter Service Intelligence (ISI) right from the planning, recruitment and training of the subversive cadre to the final implementation.

What is most interesting is the alacrity with which reports of the incident were carried by the captive media of the separatists. Graphic details were given of the incident. The picture that was painted was one of a villainous BSF contingent going berserk, beating up a religious preacher and burning religious books for the fun of it and then opening indiscriminate fire on a non-violent crowd protesting the alleged sacrilege.

It would be worthwhile for the state government to find out how many of the newspapers published in Kashmir have resident reporters in Dharam and Gool, or even Ramban for that matter, who have the expertise to send a voluminous media report of an incident of this nature with graphic details within a few hours of its taking place. The news reports have not only a minute by minute account of the proceedings but also names of witnesses. The beautifully scripted reports with intense narrative would teach a thing or two to the Delhi based reporters of national dailies also. For heaven’s sake, these areas do not even have a circulation of newspapers what to talk of reporters.

Incidentally, the reports do not carry the version of the BSF given out by their senior officer IG BSF Rajeev Krishna; the appeal for restraint made by the Union Home Minister and the Chief Minister; the official assurance that the matter would be enquired into and culprits if any would be booked. It does not speak of the many leaders and senior officials including Minister of State for Home Sajjad Kitchloo, Minister for Revenue and Relief Aijaz Ahmed Khan and DGP Ashok Prasad, who rushed to the spot to meet with the people and assuage their feelings. All these details were left for the Jammu based newspapers to cover.

The perpetrators may have got away with their evil plan but for the fact that a BSF trooper, Ram Hari, who took a bullet in his stomach has providentially survived after being air lifted to Jammu Medical College and Hospital. While narrating the sequence of events, Ram Hari has clarified that the first bullet came from the mob which hit him in the stomach. The mob did not even allow an ambulance to pass through, which necessitated his air lifting. He also confirmed that the mob had some anti-national elements who organised encirclement of the camp, ransacking of the post, torching of vehicles and stone pelting. Now the cat is truly out of the bag, it was out an out subversion.

Full credit to Chief Minister Omar Abdullah for having handled the situation in an excellent manner; he seems to have mastered the art of dealing with tense situations with all the experience that he got in the early years of his tenure. The evil design has failed, Ramban and Gool regions, never known to be overtly volatile, have got back to normal; the Shri Amarnath Yatra has resumed, curfew has been lifted from Kashmir even though sporadic protests continue; these are desperate attempts to gain some mileage out of plan that failed miserably due to the maturity of the people and the administration.

The government, however, cannot sit on its laurels. The battle lines are drawn and forces have to be ready for more such incidents in the coming days. Now is the time to understand the strategy of the adversary and take all measures to contain the same. Security will continue to hold centre stage for a long time to come.