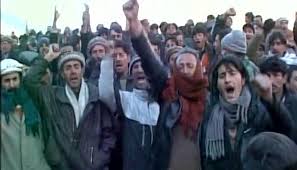 Pakistan has its own set of challenges to face, lax law and order, self created militants who have now become literal warlords, extreme poverty, failed politics and virtual rule by the Army etc. Amidst all of this the country somehow remains steadfast in its determination to gobble up the territories of Gilgit-Baltistan.

The federal government has exercised a vice-like control over the strategically important and resource rich territory ever since partition of the country, while giving an impression to the world that it is supporting the right to self determination of the people.

Since 2009, it has thrown caution to the winds and has been working towards amalgamation of the region as its integral province. The first salvo was fired in the form of the Gilgit-Baltistan Empowerment and Self Governance Order of 2009, which was strongly opposed by the people.

In May this year, even as the country is preparing for polls, the incumbent PML (N) Government led by Prime Minister Shahid Khaqan Abbasi has promulgated the Gilgit-Baltistan Reforms Order, 2018 (Order).

The PML (N) Government has the gumption of terming the order as an improved version of the Order of 2009 that was introduced by the Pakistan People’s Party (PPP) Government.

Legal experts, however, look upon the order as a blatant attempt to seize power of the Gilgit-Baltistan Council and entrust the Prime Minister (and through him the federal government) with indisputable authority.

Mir Ali, a leading legal expert has termed the order as a document of deceit and falsehood designed to further suppress the beleaguered people of the occupied territories. He adds that the Order has made the Prime Minister a virtual “Emperor” of Gilgit-Baltistan. “The Constitution of Pakistan confers no powers of legislation on the Prime Minster, but the Prime Minister will make laws for Gilgit-Baltistan thus assuming ultra-constitutional status as a King,” says Mir Ali in the Pakistan Observer.

Abdul Hamid Khan, Chairman of the Balawaristan National Front has called upon the United Nations to take notice of the gross violation of the charter of United Nations Commission for India and Pakistan (UNCIP) by increased presence of the Pakistan Army in the region and also promulgation of the Order. “Prime Minister of Pakistan has got powers like the King to appoint Governors, Public service Commission, Chief Election Commissioner and even dictate Chief Minister in the appointment of Ministers,” said Khan in his notice to the UN, while adding that Pakistan has turned the UN declared disputed territory into a colony.

An European think tank, the European Foundation for South Asia Studies (EFSAS) has very clearly stated that the “Order” has a singular objective of ensuring the success of the CPEC. It has suggested that the Chinese reaction to the “Order” gives ample evidence of the country’s total disregard for Human Rights.

“China, through its reaction, has once again revealed its proclivity to totally disregard human rights violations, the rules of international engagement and the rights of indigenous people that come in the path of its single-minded pursuit of its geo-strategic and economic goals,” the Amsterdam-based think tank said.

It is quite encouraging to note that even India has given a strong statement condemning the action taken by the Government of Pakistan. “It has been clearly conveyed that the entire state of Jammu and Kashmir, which includes the so-called ‘Gilgit-Baltistan’ areas is an integral part of India by virtue of its accession in 1947. Any action to alter the status of any part of the territory under forcible and illegal occupation of Pakistan has no legal basis whatsoever, and is completely unacceptable,’ said Indian Ministry of External Affairs through the medium of a Press Release.

The people of the region, quite naturally, are very agitated with the evil machinations of the Federal Government. They came out in large numbers to protest against the same a day ahead of Prime Minister Abbasi’s  visit to Gilgit to announce the awards package to the Gilgit-Baltistan Assembly. The protestors were fired upon by the Police as they approached the Assembly to stage a sit-in, leading to serious injuries to several persons. The protest was spearheaded by the Awami Action Committee whose chairman, Sultan Raees, was also injured. Members of the opposition in the Gilgit-Baltistan Assembly tore copies of the Order and stormed out to join the protestors.

“The PM imposed the order just a few days before the end of his Government despite knowing the aspirations of the people and their opposition to the bill,” said Muhammad Shafi, leader of the opposition in Gilgit-Baltistan. He demanded constitutional rights for his people who have been ruled by order for the last 70 odd years since partition of the sub-continent.

It is very clear that even after the proposed amalgamation of the region as a Province of Pakistan its status will be of a different nature than the other Provinces of the country. It will remain a virtual colony of the ruling elite and the Pakistan Army that can be blatantly exploited, along with China, for the China Pakistan Economic Corridor (CPEC).

CPEC enters Pakistan through this region and will run through it, but the benefits will not accrue to the locals who will, in fact, lose out on whatever little trade for sustenance that they carry out.

The nature of the promulgated order, and the opposition that it has elicited from various quarters within and outside the country points towards its unjustified nature. It amounts to laying siege on a land that does not come within the legitimate purview of the nation. That it has been done to placate a powerful, yet nervous business partner is quite noticeable.

Pakistan realises that it has overplayed its hand in a manner that is bound to draw international disapproval. It is this aspect that India needs to play to the hilt by remaining steadfast on the principled stand that it has taken. Consistency in application of the pressure holds the key to success in this war of righteousness.