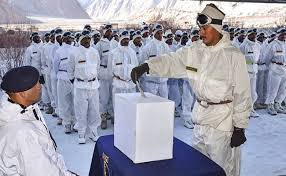 Exercising their voting rights has emerged as yet another challenge that the soldiers of the nation face in their day to day existence. One remembers that during army service one did not get to vote at all since the process of getting voter cards made and then getting the ballot papers was simply not tenable. The Constitution gives soldiers freedom to vote as general voters in the place of their posting or as service voters. Accordingly, in recent times, certain methodologies have been created that facilitate voting by the soldiers and their families.

Sadly, in the exercise of this very legitimate democratic right, the soldiers are facing harassment. Their image as good citizens of the country is being tarnished with allegations of malpractice and favouritism. All of this is being done by failing candidates and by goons who have been given charge of the booths by their respective parties and whose job is to intimidate genuine voters.

In a letter addressed to the General Officer Commanding of the Ladakh based 14 Corps, the District Election Officer, has referred to a complaint received from a contesting candidate alleging that the commanding officers were telephonically asking Jawans (soldiers) for their voting preference rather than supplying to them the ballot papers for casting their votes. The Election Officer termed this as gross violation of secrecy of voting and a malpractice liable to invite legal action.

The Army was quick to carry out a preliminary enquiry which established that the complaint by two independent candidates Sajjad Hussain and Asgar Ali Karbalai did not quote any specific instances or give any evidence to in support of the contention. The investigations further established the complaints as unfounded. The army has, of course, ordered a detailed enquiry into the matter but the result is not likely to be any different since the complaint is, by itself, quite bizarre in nature. It is probably the result of desperation on the part of the candidates due to the realisation that the election was lost and a scapegoat was required to justify the defeat. What better than the army that has no means to retaliate to such slurs and falsities?

The Election Officer, who is also the Deputy Commissioner (DC) of Leh would be expected to at least establish the facts of a complaint before taking action.  Further, the issue could have been resolved with some junior ranking officer posted in the Station Headquarters. The DC, instead, chose to shoot off a letter to a senior officer like the General Officer Commanding of the Corps. How the letter got leaked out is also something that the office of the DC should give an explanation for. Later the DC was quick in expressing satisfaction with the reply of the army that no violation was reported. Probably the truth of the faux pas has sunk in by then. However, the damage to the Army’s reputation had already been committed.

Another election related incident that caused unjust embarrassment to the army happened in Jabalpur, Madhya Pradesh, where some local goons snatched the voter identity cards of soldiers who had gone to a booth to exercise their franchise. This was done with the intention of obstructing them from voting; the goons further attempted to show the soldiers at fault by circulating a video that had no context whatsoever except for levelling of all sorts of wild allegations. The incident caused widespread outrage. The Army registered a complaint and requested the police to file an FIR against the miscreants. The incident prompted Lt Gen GS Sangha, the Colonel of the Grenadiers Regiment to which the soldiers belonged, to write an open letter expressing his displeasure and condemning the incident. “The army is not going to be cowed down by any propaganda external or internal,” said the General in a blunt riposte to the obnoxious incident.

It needs to be noted here that the Election Commission of India under oath to the Constitution of India, is mandated to ensure ‘universal adult franchise’ to all citizens, and as such, the armed forces personnel also have the right to vote at their place of posting as applicable to other government servants. Creating facility for the same is the responsibility of the Election Commission and the civil administration and by doing so they are not doing a favour to the forces.

The nation is witnessing the most acrimonious and intellectually challenged election in its history as a democracy. The Armed Forces have been set up in the middle of the same as the primary punching bag.  On top of it we have such incidents taking place where the soldiers are being subjected to insult and abuse when they exercise their right to vote..

In Ladakh, the DC has evidently acted in haste and broken protocol in a manner that is not expected from an officer of her status; it remains to be seen as to how the civil administration deals with the lapse. The soldiers in Jabalpur could have made mincemeat out of the miscreants in a matter of a few minutes; it is the maturity of their commanding officer who ordered them to maintain discipline that stopped them from doing so; details of the action taken by the police and other election observers etc against the miscreants is awaited. It is when such issues are left unaddressed that maverick elements get motivated towards treating the Army personnel with such disdain.

India needs to give a serious thought to the nation-soldier relationship that is hitting an all time low and going down at a very fast pace. There is a need to take serious cognisance of all cases related to tarnishing of the image of the Armed Forces. Certain protocols have to be set out and maintained while acknowledging the rights of the serving soldiers. Giving them short shrift because they restraint their responses is not a very god sign; it can have serious repercussion on national integration and should be controlled immediately.

(Jaibans Singh is a reputed political analyst, columnist and author)