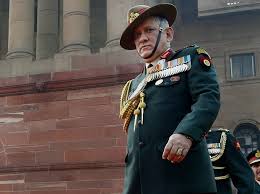 An interview by Army Chief, General Bipin Rawat, to the news agency Press Trust of India (PTI) in the last week of May has caused a lot of ripples. Sadly, many from the media and the burgeoning fraternity of “analysts” have no good words for the honest and forthright remarks that he made in the course of the interview.

Two remarks made by the General have elicited maximum attention!  “This is a proxy war. Proxy war is a dirty war….. You fight a dirty war with innovations,” he said in his first significant remark.

M P Nathanael, a retired Inspector General of Police, CRPF, in his article, “Need for maturity and sagacity” published in the Deccan Herald, has painted a doomsday scenario as the outcome of the remarks made of the Army Chief. He has also used the opportunity to place his erstwhile organisation on a high moral pedestal at the cost of the army of his nation.

“The very timing of the chief’s statement, when the valley is on the boil, sends out a message that the army cares two hoots for the feelings of the people of Kashmir,” is the menacing viewpoint of the retired Inspector General. He moves on to eulogise the “restraint” that is being shown by the paramilitary forces. ”Restraint is a word that constantly was ringing in the ears of the paramilitary personnel deployed in the Valley,” he goes on to say, denoting that restraint is a copy right of the paramilitary alone.

“The army chief’s contention that he awarded the Commendation Card to Major Gogoi to boost the morale of his personnel is a mute admission that the morale of army has not been high.” he adds for good measure.

It is so sad to see a senior officer and a professional blatantly creating a wedge between the security forces operating in close synergy in the Kashmir Valley.

He is implying that an honest message by the Army Chief, directed towards the anti-national lobby in Kashmir, has the potential to breakdown of the decades of bonding that exists between the Army and the Kashmiri people. Nathanael failed to see the confidence that the Army Chief exuded in the Jawan and Awaam (Soldier and People) relationship while making the strong statement.

It is astounding to note that somebody as senior as Nathanael does not even know that keeping morale of troops high is an ongoing process and responsibility of senior officers. His contention, it seems, is that high morale means no communication between the leader and his men! A bizarre thought process to say the least!

Srijana Mitra Das, in her article, No tears for Ummer Fayaz, carried by the Indian Express, while speaking of the hype surrounding the “innovative” operational decision taken by Major Leetul Gogoi and the relative lack of media response to the barbaric killing of Lieutenant Ummer Fayaz has said, “The first man (Farooq Dar, who was tied to the jeep), understandably traumatised, received an outpouring of support, angry editorials, incensed articles, TV outrage, online fury. The other man (Lt. Ummer Fayaz) received barely a tweet.” There cannot be a more apt assessment of the warped priorities that many in the Indian media pursue.

It is time to put the entire debate in perspective! An operational commander opening heavy fire on rioting civilians is the catalyst that the anti-national forces are looking for to take the threshold of violence to the desired peak. Major Leetul Gogoi, by not opening fire, has not provided the catalyst. However, the possibility of it coming by in the future remains.

If something of this sort happens, there can be no two views about the need for strong action to quell the lawlessness that may envelop the Kashmir Valley which is already reeling under a situation of disorder . The critically lies in doing so within a time frame that does not allow escalation of the situation in a manner that it gets out of hand, hence, a heavy hand is imperative.

The Indian Army is well aware that the Police and paramilitary forces are presently at the limit of their capacity and efficiency and the call to the army to take over and turn around the tense law and order situation may come any time now.

Instead of getting into a blame game and pointing fingers at the politicians for having messed up yet again or at the law enforcing forces for having been too soft and indecisive in dealing with the situation, the army is quietly preparing to take on the responsibility, as it has done on many previous occasions.

By saying that the army means business and will not molly-coddle the anti-social elements, the Army Chief has taken upon himself the responsibility to give a clear and concise message before his force steps in. General Rawat, with his remarks, is cautioning those who will be used as cannon fodder in this evil design of the enemy and thus trying to reduce the loss of life and property.

Such an act needs courage of conviction and would, in the long run, save a lot of lives and associated damage.

The government, by remaining silent despite strong remarks by the army Chief is sending out a clear message that when push comes to shove it will stand by the army all the way.

The filling of newsprint with misplaced haranguing by the likes of M P Nathanael will definitely not dissuade the Indian Army, from going about its job with a steely resolve. Undoubtedly, the force will be very tough and fearful for those who deserve to be kicked. Whatever needs to be done to run the writ of law enforcing forces in the Kashmir Valley will be done; the rule of law will not be compromised under any circumstances.

(Jaibans Singh is a reputed author, columnist and commentator)