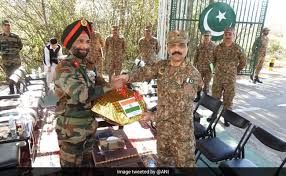 A Brigade Commanders level Flag Meeting held on November, 23, at the India-Pakistan Line of Control (LOC) in the Poonch sector has elicited a lot of interest. Flag Meetings are an ancient military precedent! It may be remembered that King Yudhishthira in Mahabharata sought a flag meeting before the commencement of the battle, as a last chance to broker peace and also to seek blessings of his elders before commencement of hostilities.

Flag Meetings in the modern context are applied to bring down tensions between two conflicting forces. They may also be held to organise return of bodies after an operation or to greet each other on festivals. They have a diplomatic sanction and Governments are honour bound to adhere to the matters agreed upon in Flag Meetings.

In the wake of the recently held Flag Meeting, which was conducted at a considerably high level, a possible thaw in the on-going face off in the area is being speculated, especially so, since the area has witnessed incessant ceasefire violations in the past few months. Reports suggest that in the past month itself five security personnel of India have been killed and seven others injured. It can be assumed that Pakistan too has suffered many casualties due to Indian retaliation to such misadventures by the country.

Recently, there has been apprehension of a resurrection of terrorist activities in areas south of the Pir Panjal that has been free of terrorism for more than a decade now. These apprehensions resurfaced post the gruesome murder of Bharatiya Janata Party (BJP) leader, Anil Parihar and his brother in Kishtwar. An increase in ceasefire violation in the Poonch-Rajouri sector gives a direct indication of the Pakistani policy to resurrect terrorism in the hinterland of the area south of the Pir Panjal.

Ceasefire violations have witnessed a distinct spike from 2015 to date, according to a report tabled in the Rajya Sabha by the government.  It went up to an unprecedented figure of 860 violations in 2017 and has already crossed the 900 mark in 2018. About 70 security personnel from the Indian army and Border Security Force (BSF) have been killed in these violations.

Experts feel that the spike in ceasefire violation is due to desperation in the Pakistan terror machinery in the face of the depleting terrorist strength in the valley due to relentless and sustained counter terrorist operations by the security forces. Presently, the number of foreign terrorists operating there is negligible. A concerted effort is being made to wean away the local youth from the path of terrorism and it is showing excellent results. Under the circumstances, the terror strategists across the border have no option but to attempt infiltration of terrorists to boost the strength and also keep the LOC/IB heated to keep up a show of the area being under stress.

The situation is such that none less than the Army Commander, Northern Command, Lt. Gen. Ranbir Singh recently sent a clear message to Pakistan that it will be punished for any activities that are detrimental to security interests of India. “There have been sniping incidents across the Line of Control (LOC) and we have regularly protested with our Pakistani counterparts about the activity of sniping and wherever they have carried out ceasefire violation we have given them a befitting reply. The message is clear to all troops on the ground that should Pakistan not stop from carrying out any activity which is detrimental to our national interest along the LOC, they should be punished accordingly,” said Lt. Gen. Singh. The Army Commander also stated that all attempts by Pakistan to infiltrate terrorist across the LOC have been successfully thwarted by the Indian troops.

In a bid to scale down tensions that Indian Government had taken a bold initiative towards cessation of hostilities during the month of Ramadan. The move came under fire, but the government went ahead with the hope that it would lead to a thaw. The result, unfortunately, was not as per expectation and the ceasefire had to be rescinded in the wake of a distinct lack of response from Pakistani trained terrorists operating in the hinterland of the Kashmir valley, and also, indiscriminate firing along the LOC and the International Border (IB).

It is encouraging to note that the Indian and Pakistan delegation held the Flag meeting in a cordial atmosphere and held discussions on augmenting confidence building measures to maintain peace along the LOC and prevention of infiltration activities from Pakistan Occupied Kashmir (POK). But, it also needs to be noted here that the meeting came on a day when security forces shot dead six Lashkar-e-Toiba (LeT) terrorists in a counter-terrorist operation in a forested area in Jammu and Kashmir’s Anantnag district. This is just one of many such successful operations that have been carried out in the past few months and will continue in the future.

Flag Meetings have their own value at the tactical level and need to be carried out at regular intervals. The proceedings have to be taken seriously and diplomatic leverage has to be gained from the same. This would require complete synergy between the Ministry of Defence and Ministry of External Affairs. To expect, however, that the meetings will bring about a paradigm shift in the policy of Proxy War against India being followed by Pakistan or would cause a cessation of Pakistani misadventures along the LOC would be too optimistic.

While expecting and hoping for good results from the high level flag meeting Indian troops will need to remain more vigilant in order to thwart any attempt by the Pakistani forces. Pakistanis have a proclivity to attempt taking advantage of a possible let down of guard due to a sense of security in the wake of good words exchanged. It is very capable of thinking in these terms and acting in a dishonourable manner. It is best to remain vigilant.

(Jaibans Singh is a reputed strategic analyst and columnist)