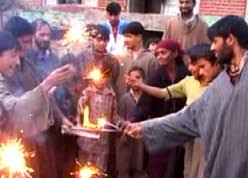 As we celebrate the festivals of Navratras, Dusshera, Diwali and many more, we need to reflect on the age old battle that our great nation has waged against forces of evil to uphold that which is just and righteous. There is also a need to be very conscious of the challenges being posed by evil, malevolent forces operating in the present day too.

There is good reason for each and every Indian to eulogise the role being played by the India Armed Forces in meeting the challenge to the security that pose a grave threat to the sovereignty and territorial integrity of the nation.

It may be recollected that Prime Minister Narendra Modi, in the course of his address to the nation on the 70th Independence Anniversary of the nation, made some significant observations with regard to the defence and security of the country.

He observed that the world has been compelled to acknowledge the strength of the nation due to the perseverance and courage of her Armed Forces.

The situation in Jammu and Kashmir poses the biggest challenge to the security of the nation. This is because a concerted multi-pronged attempt is being made by evil forces to gain control on the land and enslave the people. The assault of the foreign forces has elements of military intervention, psychological operations and political as well as social intrusion into the very fabric of the society.

The Armed Forces of the nation have successfully repelled all attempts of the enemy that fall in the military domain. Concerted counter terrorist operations in this year have broken the back of the terrorist organisations.  The terrorist strength, especially the leadership, has been literally decimated. The killing of the terrorist Abdul Quyoom Najjar in Kashmir a few days back can well be seen as the last nail in the coffin. Najjar had been active since the early 1990’s and was the oldest terrorist operating in Kashmir. He was responsible for the killing of many innocent people as also extortion, kidnapping and other such crimes. He carried an award of Rs 10 lakhs on his head. Infiltration from Pakistan too has been contained by the Army and is down to a trickle.

With the security situation firmly in control the big challenge that now remains to be addressed is in the psychological, political and societal domains.

Prime Minister Narendra Modi has said earlier that the resolution of the issues in Jammu and Kashmir will not come by bullets or abuses; it will come by the nation embracing every citizen of the state.

Accordingly, the next level in meeting the challenge would entail an active involvement of the youth of the region since they are most prone to foreign sponsored indoctrination to follow the path of violence. They need to be motivated to denounce the cult of terrorism in favour of open dialogue about their aspirations.

A bold initiative by the Kashmir people will pay a handsome dividend. The people should take a lead in appreciating the tremendous role that Indian soldiers coming from all corners of the country are playing to ensure the security of Jammu and Kashmir. All attempts by disruptive forces to denigrate the sacrifice should elicit vigorous condemnation.

Those who are instigating the young boys to disrupt counter-terrorist operations, pelt stones at security forces, force lock outs on common people and disrupt their lives and wave Pakistan/ISIS flags need to be identified, exposed and ostracised by the people.

The public should become wary of the propaganda and misinformation that Pakistan is very good at spreading. The best method of doing so is public outrage against the message and more importantly the messenger, who should be held responsible for the dissension that is spread due to such evil machinations.

The growing generations of Kashmiri youth should be told how terrorists, of local as well as foreign origin, have been and continue to be responsible for the death of many innocents and how they have caused great pain and suffering to their Kashmiri brethren.

The prime minister has also made it amply clear that his government is not likely to be cowed down by the belligerent utterances of the separatists and, at the same time, it is ready for a rational debate. It is this message of peace that the people of Kashmir need to leverage in setting out a new course for their lives shattered by terrorist sponsored violence and separatist sponsored disruption. The sooner they embark on such a course the sooner will they rid themselves of the terrible misery that has been heaped upon them by enemies of the country!

The pious festival season should serve as a catalyst for the entire nation to reach out to the people of Kashmir and they should, in turn, come forward to accept the embrace and move on the path of peace and prosperity.

The government, on its part will need to convert its assurances into positive action on ground by taking serious note of the hopes and desires of the people and finding ways and means of realising the same to whatever extent is practically feasible

If everybody moves ahead with the aforementioned goal in mind, it will be achieved in no time. The people of Kashmir should take the words of the prime minister seriously and ensure that this opportunity is not lost as others have been.

The staged has been set for the final push to usher long lasting peace, prosperity and development in the state of Jammu and Kashmir, now the act is awaited.