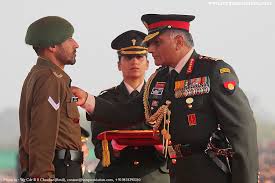 On April, 2, 2014, Muneer Ahmad Manhas, resident of Uri, Baramulla was detained in Police station Ram Munshi Bagh, Srinagar, on allegations of being involved in a fake currency racket. The very next day Muneer died in police custody. The police, in an initial statement, said that after having dinner Muneer went to his lock-up and entered the bathroom where he hanged himself with his socks.

A few day later Showkat Malik of Tregham, district Kupwara, was arrested for attempted rape of a woman on the night of Saturday, April, 05. Another person who is said to have accompanied him is absconding and a man-hunt has been launched to nab him.

The aforementioned two incidents of alleged criminal offense are not connected with each other. The common link is that both the offenders are from the Territorial Army (Home and Hearth) {TA (H&H)} of Jammu and Kashmir.

Not for a moment would one like to conclude or even insist that the aforementioned soldiers are innocent of the charges levelled against them. There is a paucity of credible information with respect to the cases which precludes any such conclusion. In any case, the matters are sub-judice and will be dealt with according to the law.

Be that as it may, one cannot help but ponder at the coincidence by which these two soldiers have been caught in acts of criminality during a sensitive period when the state is preparing for elections. Further, an arrest for a fake currency racket does not come across as a credible reason for an able bodied youth to hang himself. Also, it is difficult to believe that a strong soldier can hang himself with a pair of socks that would hardly fit around his neck.

It is only fitting that the State Human Right Commission has taken suo moto cognisance of the matter and has sought reports from the police and the army regarding the incident. The notice has come in the wake of a complaint filed by the family of the deceased negating the version of the police about the involvement of the deceased in the fake currency racket and also the mode of death.

In the second case involving alleged rape of a woman, the Indian Army has clarified that the accused Showkat Malik was enrolled into TA (H&H) in January, 2004 and on completion of 10 years of service had sought voluntary disembodiment which was granted in April, 01, 2014, a few days before the alleged crime has taken place. It would be worth its while to consider the option of the person becoming a soft target for framing in a rape case with some ulterior motive – personal or professional.

Territorial Army in India is a part of the regular army but it does not constitute the regular forces. It is an organisation of volunteers who receive military training for a specified period of time every year and are mobilised in case of emergency to assist in operations on the administrative front. In times of war or emergency the Territorial Army is “embodied” according to requirement. On such occasions the units are on the same footing as the regular army for all purposes including pay and allowance for the personnel. In case a soldier serving in a Territorial Army unit wishes to leave service he can do so easily in a manner that is termed as “disembodiment” as was the case with Showkat Malik.

In an attempt to integrate misguided youth of the trouble torn region of Jammu and Kashmir while providing to them a decent employment opportunity, the government of India decided to raise a number of TA (H&H) battalions in the state. TA (H&H) battalions comprise not only of youth from the state but also specifically from the area where they operate. Minimum education level is eight standard and age limit is 25 years and below. Ex-servicemen, Ex-STF/SPO and surrendered militants are also enrolled in the battalion.

The basic task of the battalion is to assist security forces in the conduct of counter- terrorist operations. The soldiers of TA (H&H) help eliminate terrorism from their own area while being paid for the good work done. This apart, they provide valuable inputs on the civic amenities that the region requires for its development. They not only recommend projects for Operation Sadbhavna but also work whole heartedly towards their implementation.

Recruitment for TA (H&H) has been done from a large array of terrorist infested districts to include Baramulla, Kupwara and Jammu. The response has been overwhelming and the work output is much beyond the expectations of the Army. The loyalty and dedication of the TA (H&H) soldiers provides a role model for the security forces in the state.

Quite naturally divisive forces and terrorists organisations operating in the valley have been worried about this positive turn of events for quite some time now. The erstwhile recruitment areas of terrorists are now providing soldiers for TA (H&H) battalions, who are doing sterling work in service of the nation. It is also well known that TA (H&H) battalions in Jammu and Kashmir will be looked upon to play an important role in the smooth conduct of the forthcoming polls.

In the recent past a number of analysts have spoken of divisive and disruptive forces in Jammu and Kashmir trying to discredit the security forces with aspersions of criminality and human rights violations in an attempt to scuttle the forthcoming polls; while ensuring that justice prevails in the aforementioned cases it is also important to take cognisance of this note of caution. Incidents of this nature have the potential of building up a mob frenzy that can trigger a cycle of protests and violence. The security forces will also be well advised to educate their rank and file about the nefarious designs of divisive forces so that they are alert to counter any such attempt.