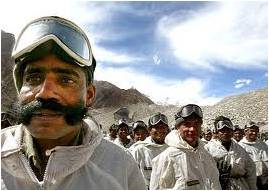 The Indo-Pakistan impasse on Siachen has been described by Dr Stephen Cohen, a Washington based South Asia analyst as “a fight between two bald men over a comb”. The problem with US thinkers and opinion makers is that they oversimplify important strategic issues as has been done by the good doctor with his bland comment. One would expect them to be gracious enough to give a modicum of respect to the intelligence of the parties involved in the dispute. We do not have a set of idiots sitting in India and Pakistan who fail to understand what the good doctor wishes to project as a fairly easy issue.

The matter of demilitarisation has been debated between India and Pakistan for many years now. At the diplomatic level, no less than 12 meetings have been held and on many an occasion it has been said that a breakthrough is around the corner. During the last decade, two Prime Ministers of India, Atal Bihari Vajpayee and Manmohan Singh, have expressly desired a withdrawal of forces, their sentiments are echoed my many political leaders in Pakistan, especially Nawaz Sharif.

Recently, an avalanche on the Pakistani side of the glacier has claimed more than 124 Pakistani Army soldiers and 11 civilian contractors. Those who lost their lives were mostly from the ill fated and brutalised Northern Light Infantry of the Pakistan Army, whose soldiers are regularly used as cannon fodder for their Army’s misadventures against India. Being Shia natives belonging to the occupied territories, they are considered to be expendable. It is for this reason that they were sent into India to die in the Kargil war and are now expected to man all environmentally sensitive and calamity prone regions like Gayari where the recent avalanche occurred on April, 07.

The calamity of huge proportions once again put the spotlight on the issue of demilitarisation of the region. In this instance the initiative was taken by none other than the Pakistani Army Chief, General Ashfaq Parvez Kayani. While on a visit to the site of the disaster, he spoke of peaceful coexistence with India, withdrawal of troops from Siachen and cuts in the defence budget to boost economic activity. The Pakistani press and commentators went into over drive after the statement was released. Some described Kayani’s statement as revolutionary and pertinent to Pakistan’s interests. Others considered it to be significant since the army has traditionally been regarded as dominated by hawks. Yet another opinion termed this as a surprisingly refreshing view of Pakistan-India relations which points towards a rethink in the military’s fixation of India being a permanent enemy. “Why should we be going for an agreement, we should just withdraw,” said Imtiaz Alam, the Pakistan based head of the South Asian Free Media Association. In India also, a demand to take advantage of the opening provided by Kayani to resolve the issue started doing the rounds.

The popular sentiment was soon enough put to rest. An emphatic denial of any change in Pakistan’s policy on Siachen in the wake of General Kayani’s statement was issued by the country’s foreign office. This was further emphasised by the Pakistan Foreign Minister, Hina Rabbani Khar, who said that the withdrawal would happen only when both countries trust each other. Since the Pakistani foreign office cannot dare to counter what General Kayani has said, one cannot help feeling that the entire drama was stage managed and orchestrated. So after all the media hype, the profound comments, the sage views, the change of heart, we are back to square one.

One may ask, what is so difficult about the whole issue that it cannot be resolved? There is a two word answer- “trust deficit”. India is, very rightly, not ready to contemplate any change in its advantageous tactical position astride the Saltoro Ridge till such time that the actual position on ground of the two sides is not authenticated on a map; Pakistan is, of course, not ready to do anything which would tie down its options for the future and take the region out of the ambit of being a boundary dispute. This aspect, in itself, nullifies most hopes of a forward movement in the talks.

A third dimension has been added to the problem by the Chinese interest and ingress into Pakistan’s illegally occupied Indian territory of Gilgit-Baltistan. Now in an open and blatant act of felony, it has seceded some strategically important real estate of Gilgit-Baltistan to China. As a result, China can also look covetously towards the Saltoro Ridge. Under these circumstances, even if India and Pakistan reach to an agreement for withdrawal of forces from the glacier, what stops China from conniving with Pakistan to occupy the dominant positions? Considering the cosy relationship that exists between these two Nations it would become a classic case of Pakistan eating the cake and having it too.

The expenditure that is being incurred by India to hold on to Siachen is well within the means of the country. If anybody is feeling the pinch it is Pakistan and that is obvious by the near desperation with which the country is looking for a solution. A problem bigger than the expenditure is the environmental degradation that is taking place in the ecologically sensitive zone due to continued presence of a large body of men and material; India needs to take a call on this aspect by instituting measures to clean up the piling up waste in the area. Beyond this the country cannot afford to be swayed by the oratory of some ill informed doves and pressures emanating from a desperate Pakistan. While tasking a positive view of the whole issue, primacy has to be given to facets of real estate, sovereignty, strategic interests and above all the trust deficit.