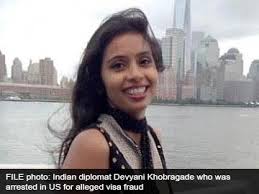 Devyani Khobragade, India’s deputy consul general to the US may well go down in history as a person who brought the Indo-US relationship to a brink. It is heartening to see India stand up for maltreatment of one of its citizens in the US, something that seems to have become a norm in the arrogant nation. Devyani was charged by the US authorities with visa fraud and underpaying her domestic helper on December, 12. She was subject to a number of indignities like incarceration with criminals, strip search, cavity search etc before being released on an unsecured bond of a massive $ 250,000.

India’s response to this unsavoury incident was unpredictably forceful. Union Minister for External Affairs, Salman Khurshid bluntly questioned the arrest while the National Security Advisor, Shiv Shanker Menon called it despicable and barbaric. The Ministry of External Affairs (MEA) immediately swung into action and, in no time, many diplomatic facilities and courtesies extended to the US without reciprocity from the country were withdrawn. The identity cards to the US embassy staff were withdrawn for issuing new cards that would be exact replicas of what is issued to Indian diplomats by the US; security barriers outside the US embassy in New Delhi were removed and the Embassy was asked to provide details of salaries being given to Indian domestic staff working in the houses of US diplomats.

The entire Indian nation stands firmly in support of its government in this case since the behaviour of the US is unanimously deemed to be arrogant, supercilious and uncivilised. It is good to see India standing for what is just and right without regard to the consequences of taking on a super-power. There is, however, a pin-prick rankling the mind here – is this reaction because the person unjustly humiliated and victimised by the US happens to be a bureaucrat? Is the aggression shown by the government a result of one of their own being targeted? Would the Indian bureaucracy have reacted in a similar manner had someone other than their own cadre been thus humiliated?

This is definitely not the first time that an eminent India citizen has been humiliated in this manner in the US. Our Ex-President, Dr APJ Abdul Kalam and Shah Rukh Khan are known to have been humiliated at US airports even though the matter did not go to the level of an arrest. The entire nation expressed outrage that was conveyed, in no small measure, by the media but the response of the MEA was lukewarm at best. The ministry did take up the issue but not forcefully enough to give a message to the US that such behaviour would not be tolerated.

It is not only the US that has faulted on such issues, recently there has been a case where a country as small as Sri Lanka has misbehaved with an Indian journalist who has been deported after a few days in preventive custody. The MEA, preoccupied with its face- off with the US hardly paid any attention to the problem in Sri Lanka There is also an ongoing spat with Sri Lanka so far as fishing rights are concerned; recently it has been reported that 22 Indian fishermen have been arrested by the Sri Lankan Navy. The MEA has not come up with a credible statement, let alone a solution to the problem.

Even more serious is the matter of face-offs along the line of control between India and Pakistan. Every time some serious incident takes place involving injury or loss of life due to a Pakistani military misadventure one cannot help getting a feeling that the MEA attempts to push the matter under the carpet for some diplomatic reasons. Post the August. 06, 2013, incident where five Indian soldiers were killed, the Union Defence Minister, AK Antony, stated that “some of the attackers were dressed in Pakistan Army uniforms.” The statement, of course, elicited tremendous criticism which forced the Minister to retract the very next day. What is important to note here is that some reports suggested that the statement was made after consultation with the MEA and the National Security Advisor. In this instance and the one before it in January when Pakistani came into Indian territories and beheaded an Indian soldier, the reaction of the MEA was muted. It did not go beyond summoning the Pakistan High Commissioner and “lodging a strong protest,” a weak standard response and a far cry from what the ministry has done in the Devyani case.

If a powerful nation like the US can be can be taken to task and forced to accept that it was wrong then what is the problem in dealing with small countries like Sri Lanka and Pakistan? If the Indian bureaucracy can go to the extent of breaking down relations with a good friend and a super-power while standing by a common Indian citizen then why not do the same when the lives of its soldiers and dignity of the country’s armed forces are involved? It is common knowledge that the MEA invariably advocates restraint in case dealing with Pakistan and China due to some fixed mindsets with regard to maintaining diplomatic ties with the two countries.

The diplomatic response in the Devyani case has won national approbation and has also demonstrated the power that the MEA has in influencing international diplomacy. It is now up to the MEA to establish that this is not a case of Devyani being more “Indian” than other Indians simply because she is one of their own. The MEA needs to demonstrate its commitment by being similarly firm and equally forthcoming in protecting the rights and dignity of all Indian citizens in all cases in the future, especially so, in the case of the nations brave soldiers.