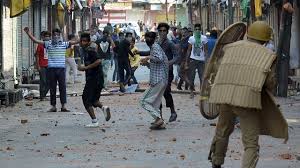 How is Kashmir sustaining itself despite three long months of closure and turmoil? A deep insight into the course of events points towards a method in the madness that is ensuring sustenance. For the perpetrators of this disruption it is, of course,  inconsequential that a large section of the society, especially poor daily wagers, are suffering terribly due to this upheaval in normal life.

The Bandh (lockout) calls between 6 AM to 6 PM ensure that people get an opportunity to visit the markets in the evening and purchase their essentials even as the outside world gets a view of desolate, deserted streets all through the day.

The Srinagar-Jammu highway is choked with trucks carrying supplies between the summer and winter capitals of the state. Essential commodities are, as such, available in ample quantity to meet day to day as well as winter stocking requirements of most households in Kashmir.

There are reports of essential commodities being provided to villagers free of cost through Masjids and designated local shopkeepers. Such largesse is being passed off as community service; it is being portrayed that rich and influential Kashmiris are helping their less fortunate brethren who are suffering due to a breakdown of the administration.

The scope of this activity, however, is much larger than mere social service by some rich community members. The source of the money and the manner in which this huge enterprise is being maintained remains a mystery.

Every now and then, congregations are organised in villages where anti-India and pro-Pakistan sloganeering is orchestrated and some flags of Pakistan and ISIS etc. are raised. These are indicators of the real motive behind the generosity.

The apple crop is being transported to Delhi in a seamless manner with none of the disruptive and divisive forces interfering in the movement. The bumper crop has, in fact, led to a reduction in prices rather than causing a spiral due to less availability.

Most schools are open, as are government offices and medical institutions. Students who have to prepare for competitive examinations and those studying in institutions like the National Institute of Technology (NIT) Srinagar have migrated to Jammu and other parts of the country to continue with their educational pursuits.

The “young boys” spearheading the agitation due to a so-called “expression of anger” over the killing of the terrorist, Burhan Wani, are no longer moving around undeterred because a sizeable number, including their “commanders,” have been detained under the Public Security Act (PSA).

While stone pelting is on the decline the boys have changed strategy and are now intimidating people into following the protest calendars being are issued by the Hurriyat.

It is quite apparent that the unrest in Kashmir, this time round, has been planned and executed in a professional manner that is beyond the capability and capacity of the Hurriyat and other separatist elements.

There appears to be a nerve centre (war room) in place that is operating with unlimited power, facility and financial resources.

Quite obviously, it is the brainchild of a group of forces inimical to India that are working in tandem and with a long term strategy in place.

The nerve centre had anticipated that Burhan Wani would die at some stage and had a plan in place to exploit the incident in a calibrated manner.

For this, adequate human resources seem to have been planted within the civilian population through indoctrination carried out by Maulanas and Madrasas. Brainwashing of such youth who visit Pakistan for education and exchange programmes also seems to have been carried out.

The strategy that has been evolved is three pronged. First, raise the level from a law and order (terrorism) problem to a mass civil uprising that would make the international community sit up and take notice. This was achieved by engineering the street protests and stone pelting.

Second, win over the locals by first depriving them and then extending a helping hand in a manner that would embarrass the elected government. This is being achieved by providing assistance to the lesser sections of society, especially in villages, through the medium of orchestrated social service.

Third, demonstrate to the people that the government can function only in the manner dictated by the so-called “Second Intifada.” This is being done by opening markets only at designated times, ensuring unhindered movement of the apple crop etc.

The Hurriyat, the “angry young boys,” the Maulanas, the Jammat et al, are mere pawns in this great game that has been set-up with intense planning and which is now being played out with immense deliberation.

The strongest arm of this plan is the “youth dimension.” After having set out the plan with stone pelting, this resource is now gaining an underground character. It is becoming something like the Over Ground Workers (OGWs) of yore but much more lethal.

There is a reason for the government as well as the civil society to be worried about this development and to urgently find ways and means to contain the same.

The authorities need to take necessary steps to re-channelise the boys into the mainstream. The parents of these misled youth also need to work towards wresting them away from the clutches of disaffection, which would ruin their very lives.

It is after many decades that the “establishment” in Pakistan, with assistance from other international friends and indigenous militant organisations, has hit upon a workable plan to give impetus to its evil designs in the Kashmir Valley. There is a deep rooted conspiracy being played out in Kashmir.

The forces behind the upheaval are not likely to allow the same to die down in a hurry as is being anticipated by some in view of the incoming winter and move of the government from Srinagar to Jammu.  India needs to be ready for a long haul in countering this challenge being posed in Jammu and Kashmir by the enemy.