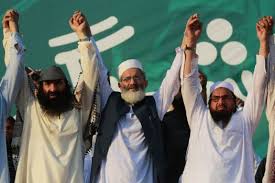 The chest-thumping by Indian politicos as well as TV journalists on imposition of sanctions by the United States on the Hizbul Mujahedeen (HM), after declaring it a foreign terrorist organisation, gave an impression of a major battle having been won against terrorism in Jammu and Kashmir.

But is it? How does it make any difference if the US freezes any assets that HM may be holding in the country and bars US citizens from engaging in any transactions with the group? The US move is nothing more than a reach out to the Indian leadership, while doing little to put pressure on Pakistan to rein in terrorists operating from its soil.

Moreover, how does the latest action by US help India in its fight against terrorism? Do terrorist organisations maintain bank accounts in their names? It’s a known fact that most of the terror activities are financed through cash and that too through illegal Hawala transactions.

There is a widespread practice among Muslims called Zakat (obligatory charities) which involves donating money to charities. Zakat is considered to be one of the five pillars of Islam; it is meant to support the poor and needy and spread the message of Islam.

Unfortunately, Zakat has been misused by established charities of the Middle East to finance terrorist groups. Several charity organisations in the Muslim world have no compunction in diverted Zakat to finance “Jihad” (the so-called holy war). Charities based in Saudi Arabia, for long, have been involved in sponsoring and financing of terrorist organisations in Jammu and Kashmir.

Then there is drug money! Reams of reports are available to link the billions of dollars worth of opiate trade to terror groups. According to a report by the United Nations, Afghanistan’s poppy crops were the major source of terror funding and Al-Qaeda was the main beneficiary from the illegal drug trade in the late nineties up to the collapse of the illegitimate Taliban government in 2001. In effect, Al-Qaeda’s rapid growth in Afghanistan can be directly linked to the illegal opium trade.

Of late, the Islamic State has emerged as the wealthiest terror group by engaging in illicit trade in oil after it occupied vast tract of territories in Iraq and Syria. According to conservative estimates the group, when at its peak, used to make as much as $ 3 million a day, a huge amount for the conduct and sustenance of terrorism.

Therefore, the US move claiming “such designations are aimed at denying individuals and entities access to the US financial system” will not have any impact as far as the terrorism in Jammu and Kashmir is concerned.

In any case, this is a good example of a political act being “too less, too late.” The HM today is a pale shadow it its previous self. It has been reduced to a few score terrorists operating only in the Kashmir Valley and they too are on the verge of being eliminated. The Indian army has killed more than 140 terrorists in relentless operations within this year and if the momentum is maintained in the coming months terrorism, and along with it the HM, will be finished in Jammu and Kashmir by the year end.

Terrorism, however, has this proclivity of raising its ugly head repeatedly, for which reason, India cannot afford to get complacent. The fight against the scourge has to be sustained and relentless.

Prime Minister Narendra Modi has been calling upon the global community to join hands to fight the cult of terrorism and it is in response to this call that one would expect the US to respond positively.

President Donald Trump needs to live up to promises which he made during electioneering that the war against terrorism could see a paradigm shift under his watch. “We will defeat radical Islamic terrorism when I’m president. We will stand shoulder to shoulder with India in sharing intelligence and keeping our people safe mutually,” Trump had said during electioneering.

At this point in time the promises seem hollow. Pakistan has made a mockery of the US by allowing Syed Salahuddin, the head of Hizbul Mujahedeen, to address a press conference at Muzaffarabad’s Centre Press Club soon after he was named as a specially designated global terrorist by the US Department of State on June 26 this year. Both Salahuddin as well as India’s most wanted terrorist, Hafiz Saeed, who also carries a $10 million bounty on his head by the US, have been openly holding rallies where they spew venom against India and the US.

If the US is serious about its fight against terrorism, it should put pressure on Pakistan to take action against them, which it can easily do. If the US could enter Pakistani territory and smoke out al Qaeda leader Osama bin Laden in May 2011, can it not it do the same with Salahuddin and Saeed? It is not that the US cannot do so; it will not do it.

Laden was a direct threat to the US as his Jihadists’ were fighting against the US military forces in Afghanistan. As far as Salahuddin and Saeed are concerned, they do not pose any threat to the US as both have been carrying out terrorist operations against India in Jammu and Kashmir.

The US is more concerned about Afghanistan than Kashmir where its forces are in direct line of fire. And it knows it very well that it cannot ensure a decisive victory in Afghanistan without the help of Pakistan. Otherwise what explains the US decision to continue patting Pakistan occasionally in spite of Laden being provided a safe sanctuary by Pakistan?

Therefore, India should do well not to rejoice at such theatrics and sharpen its own strategy to meet the challenge. Terrorism in Jammu and Kashmir is India’s own test and it has to emerge victorious in the same without anybody’s help. While pushing the US towards a “partnership approach” to counter terror, let small gestures by the country not remove the focus from the real work at hand.