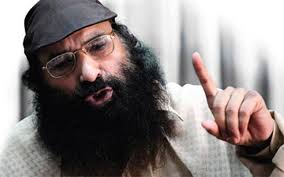 What happened to the week long agitation that Syed Sallahuddin had ordered to be observed to mark the first death anniversary of the terrorist Burhan Wani?

It may be recalled that Sallahuddin, in a video message, had called for “Hafta-e-Shuhuda” (martyrs’ week) to be observed in Jammu and Kashmir as well as Pakistan Occupied Jammu and Kashmir (POJK) from July, 7, onwards.

As part of the commemoration he had called for public gatherings and rallies to show solidarity to the cause of terrorism. Nothing of this sort happened! Only a partial shutdown was observed on 08 July with sporadic incidents of stone pelting. The response on July, 13, (martyrs day observed by some political parties of Kashmir) was even less, in fact, only a few places observed the forced shut down.

One reason behind the weak response could be that the All Party Hurriyat Conference (Hurriyat)) constituents are miffed by Sallahuddin’s attempt to wrest from them the agenda of issuing protest calendars. It is very much possible that the Hurriyat did not allow the protest call to be successful in order to slight Sallahuddin. So much for the much touted cause that these imposters talk of all the time!

The manner in which the script has unfolded merits a holistic assessment of the position that Sallahuddin presently holds in the so-called “resistance movement.”

Due to an outburst of emotion, after having lost in the state legislative assembly election in 1987, Sallahuddin crossed over to POJK. So many other Kashmiri boys also crossed over with him and were reduced to a life of penury in refugee camps.

Sallahuddin was lucky insofar that, because of his political background, he was handpicked by of Pakistan’s Inter Services Intelligence (ISI) to further its agenda of boosting local terrorism in Jammu and Kashmir.

He was given the high sounding appointment of “Chief of the Hizbul Mujahedeen (HM)” and “Chairman of the United Jihad Council (UJC).” HM is an indigenous terrorist group raised by the ISI to give a local sheen to its terror operations in Jammu and Kashmir; the UJC is an umbrella organisation created by the ISI as a unified command for the many terrorist organisations operating in Jammu and Kashmir. There were 13 terror organisations in the UJC, the main, apart from HM, are the Lashkar-e-Toiba (LeT), Harkat-ul-Mujahedeen (HuM) and Al-Badr.

In actuality, Sallahuddin was no more than a titular entity since the ISI directly controlled the terrorist operations including the funding, recruitment, training, equipping, infiltration, targets etc. Sallahuddin merely did what he was told to do in order to escape the ignominious life in refugee camps that most of his compatriots had been reduced to. He said to the media what he was told to say and passed orders to HM that he was told to pass.

Powerful organisations like the LeT held him in utter disdain despite his being nominated as Chairman of the UJC by the ISI. Would anybody in his right mind believe that Hafiz Saeed, the boss of the LeT, whom even the Pakistan Army fears would function under the leadership of an insipid person like Sallahuddin? The entire hallow created around him was one big sham.

The situation in Jammu and Kashmir has changed dramatically from the days when Sallahuddin was given the aforementioned exalted status. The times when thousands of terrorists from different groups roamed around freely are long since over. Now the terrorist strength is less than 200 and that too only in the Kashmir Valley, mainly in South Kashmir; all other areas of the state have been freed from the scourge of terrorism.

The larger terror organisations like HuM and al-Badr have no presence in the state, not to talk of the other fringe groups. The remnants are new recruits of the HM and some elements of the LeT.

Under these circumstances the role of Sallahuddin as chairman of the UJC, holds no significance any more. As chief of the HM he continues to hold some relevance for the ISI, but that is also fast diminishing in consideration of the relentless counter terrorist operation being carried out by the Indian army. Untrained, perfidiously indoctrinated, local terrorists of the HM are falling like nine pins.

Sallahuddin these days is making wild statements here and there.  Sometimes he exhorts Pakistan to nuke India and in other times he calls for civil agitation. All of this is, quite obviously, a desperate attempt to stay in the lime light and somehow maintain his significance to the ISI.

The Hurriyat, at one stage, was fearful of the HM that Sallahuddin controlled on behalf of the ISI and hence, it listened to his diktats. Now the Hurriyat is well aware of his diminished status. It is also well aware that with the terrorist strength gone he will nibble for space in the political spectrum. The Hurriyat will not allow any such thing to happen as its fights a battle for its own survival.  A decision to not allow his call for a week long agitation to be successful, when seen in the aforementioned backdrop, makes sense for the Hurriyat.

The next event on the table is observance of Black Day by Pakistan on 19 July to “express solidarity with Kashmiris.” The only Kashmiri who will benefit from this solidarity is Syed Sallahuddin, who will get another shot at garnering much needed media attention. Pakistan would do well to desist from such fruitless exercises. It has enough serious issues of its own to address and its energy should be directed in that direction.

The only graceful option left for Sallahuddin is to seek retirement with pension from the ISI whom he has served so loyally for three decades. He should sit back and contemplate upon his sins, having ruined so many families by spilling the blood of his kith and kin for no logical reason.

The Kashmir youth need to look at his wasted life and think twice before joining the cult of terrorism. The time to overcome this destructive narrative has arrived.

(Jaibans Singh is a reputed security expert, columnist and commentator)