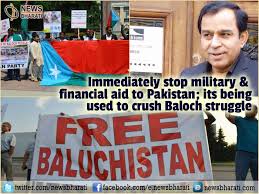 Balochistan, the most restive province of Pakistan, has entered into a new era of violence. The pattern has witnessed a change with State terrorism emerging as the biggest cause behind the spiral of violence instead of religious polarisation or nationalist ideology.

Inputs regarding atrocities being committed on innocent civilians by the Pakistan Army are coming out frequently despite the ban on media and an attempt to keep the happenings of the province under wraps.

A recent case that has severely impacted the collective sensibility of the whole world is the recovery of five bullet ridden bodies of Baloch civilians from the Mand area of District Kech on Thursday, May, 04.

Two among those found dead had reportedly been under illegal detention of the state forces for a long time; Master Baitullah had gone missing for two years from Tump and Sabir Baloch and been reported abducted from Turbat. The killing was particularly gory and horrific.

The issue of people going “mysteriously missing” in Balochistan has been raised by major national parties like the Pakistan People’s Party (PPP). A month earlier in April, PPP President of Balochistan Province, Mir Madad Ali Jattak, warned that his party would block highways linking the province with the rest of the country if three ‘missing’ close aides to party co-chairperson Asif Ali Zardari were not produced in court within 24 hours.

“Forcible disappearance of three close aides to Asif Ali Zardari was an attempt to pressurise the PPP leadership not to talk against corruption of rulers of Islamabad and Lahore,” Jattak said in a press conference.

Much as Pakistan would like to keep all of these atrocities hidden from the world, the proactive Diaspora of the beleaguered province has been making a Herculean effort to sensitise the international community towards the plight of the people.

Protests are being held regularly whenever meetings of the United Nations Human Rights Council (UNHRC) are held in Geneva. Expatriated and exiled Balochs protest frequently in front of Pakistan High Commissions and Embassies across the world. They lose no opportunity in presenting their point of view in front of world leaders in all possible forums and in every possible manner.

Abdul Nawaz Bugti, Baloch Republican Party (BRP) representative at the UNHRC, while condemning the recent brutal mutilation of dead bodies of two Indian soldiers by the Pakistani Army on the Line of Control said, “Pakistan’s atrocities are spreading from Balochistan to India and will spread in the whole world.”

“Baloch political workers, politicians, activists, students are kidnapped daily and tortured in Pakistani cells. They are subject to untold atrocities and their bodies are then thrown away at deserted paces after being mutilated,” he added.

Similar sentiments were echoed by, Mehran Marri, a noted activist for the Baloch freedom movement. While emphasising that Pakistan and especially the Pakistan Army have proven themselves to be criminal minded and barbaric entities he said, “By decapitating Indian soldiers and mutilating their bodies, they have started with their neighbours now, what they have been doing in Balochistan for the past 70 years.”

The involvement of China in this subjugation of the Baloch people and blatant colonisation of their land has also been raised by the Diaspora in international forums. In a recent conference on ‘European Union and OBOR,’ held at Brussels, Baloch leader, Mehran Marri, through the medium of a short film, highlighted the suffering and repression of the Baloch people at the hands of the Pakistan Army in areas through which the CPEC is to pass. Marri stated that China was not driven by any altruistic motives, and was not promoting the CPEC to improve the lives of the local people. The film was well received and the conference witnessed major opposition to CPEC and OBOR by Members of the European Parliament (MEP).

On May, 28, 1998, Pakistan carried out a nuclear blast in the Chaghai hills in Balochistan.  The Free Balochistan Movement (FBM) has announced simultaneous protests in many cities of the world against Pakistan’s nuclear weapons testing in Balochistan on the same day this year. Hyrbyair Marri, the leader of the FBM emphatically states that the dirty bomb and other explosions carried out later have been conducted without mandatory precautions and have severely contaminated the Baloch land. The effects will last for many decades if not forever.  It is for this reason that experts have not been allowed to visit the region to examine the effects of the radioactivity in the area. The attempt to draw world attention towards the sorry state of affairs in Balochistan will be given another boost by this initiative.

Such is the hatred that the Baloch people feel against the repressive, Punjab centric federal regime of Pakistan that they are giving open invitations to US President Donald Trump to bombard their own country and free the people from the atrocities and extreme brutality that they are undergoing.

“I request the U.S. President in Pentagon to bombard Pakistan and free the people who are under extreme brutality and genocidal occupation of the Pakistani apartheid and draconian state,” said Baloch leader Umar Daud Khattak in his passionate appeal to the US.

India has, of late, been speaking up vigorously in favour of the Baloch independence movement. Prime Minister Narendra Modi set the pace with his speech from the ramparts of the Red Fort on Independence Day, 2016. The forwards movement from there on, sadly, has been slow and laggard. The exiled Baloch leaders who are fighting for the cause of their land in foreign shores feel that the Indian government uses them for furthering its own agenda. It does support their cause but not wholeheartedly.

The exiled Baloch leaders are strongly condemning the barbaric terrorist activities of Pakistan in Jammu and Kashmir. Indian must reciprocate by come up equally strongly in favour of the Baloch people. Theirs is a just and righteous cause that needs unstinted support by India.