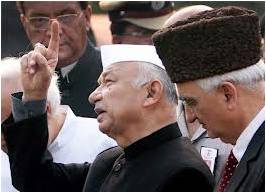 “It cannot be withdrawn unless it (the State) is quite and calm,” are the reported forceful words of Union Home Minister Sushil Kumar Shinde while referring to the revocation of the Armed Forces Special Powers Act (AFSPA) in the state of Jammu and Kashmir. “Infiltration has increased. That is our information. We are worried. We are watchful in all sectors. We are very careful. But no untoward incident has happened as far as infiltration is concerned,” added the minister to give an ominous scenario of security in the region considered by many, including the state government, to be quite normal

The Home Minister was not speaking through his hat, nor was he getting into a political confrontation with the ruling dispensation. After all, his party is in the ruling coalition and he cannot go against its sentiment. His statement was the outcome of some very disturbing statistics with regard to the security situation. Earlier, the Union government had told the parliament that till October 12, 2012, 111 terrorists trying to cross over had been apprehended on the borders of the state, while almost an equal number had been successful in infiltrating across the line of control and the international border. The statement makes it quite evident that infiltration attempts continue to be made not only in the Kashmir valley but also in Jammu region. This number is in excess of the figures in the previous two years and this definitely constitutes a reason for worry.

The matter does not end here!! Ceasefire violations have now become a norm all along the line of control and more so in the area of Krishna Ghati, in Rajouri district, south of the Pir Panjal. This area has traditionally been used by Pakistan to infiltrate terrorists because of thick foliage and uneven terrain. With winter setting in, dense fog conditions offer an ample opportunity to increase activity and this seems to be the game plan of Pakistan. The Indian authorities have no option but to increase vigil and ensure that infiltration is kept within manageable limits, it being virtually impossible to ensure a zero level despite the fence, electronic sensors and many other methods that have been employed to check this menace. It is not as if these methods have not given results; they have helped check infiltration to a great degree, but as soon as a new method is adopted the other side comes up with some means to counter the same, such is their desperation to get some manpower across. The bottom line is that Pakistan is not ready to let go of any opportunity to revive terrorism in the region and this has prompted the Home Minister to bluntly dispel all talk of a change in the security paradigm of the state.

Despite this clear and lucid writing on the wall the ruling National Conference does not seem to be in any mood to relent from its stated posture of bringing down the security threshold in the State. It prefers to stick to its faulty premise of normal conditions having taken firm root. In a recent meeting of the Party’s working committee chaired by its President Farooq Abdullah, a resolution was passed for continuance of efforts to bring about a revocation of the AFSPA by dialogue with the government at the centre. The working committee went further to demand that a sustained dialogue between India and Pakistan to find a permanent solution to the Kashmir issue which is acceptable to all the stake holders and can lead to a lasting peace in the region.

The contradictions regarding the situation in Kashmir and Pakistan’s involvement do not end here. Mirwaiz Umar Farooq, the chairman of the Hurriyat Conference, now getting ready to go for a sojourn to the neighbouring enemy country feels, quite incredibly, that the mindset of leadership of India and Pakistan has changed. How he has reached to this conclusion remains a mystery but there it is for all to see and derive conclusions thereof.

It would be interesting to gauge the effect of such contradictory statements and postures on the common man. Who should he believe and what should he consider to be right between these diagrammatically opposing thought processes? The fact that such contradictions are also emerging from within functionaries of the same government and members of a political coalition further complicates the issue. Earlier Indian leaders had the bogey of Pakistan to bail them out of any and every situation; whenever something bad happened it was invariably attributed to the “Foreign hand.” The new buzz word in this regard is coalition politics; hence, in case a hue and cry is created, the whole sordid affair will be brushed under the carpet by quoting the compulsions of coalition politics.

There is a need to get the facts right loud and clear so as to dispel the contradictions. Pakistan has exhibited no intention of relenting from the pursuit of exporting terror into India especially Kashmir and is not likely to do so in the near future. In fact, the attempts are likely to increase as the nation heads towards elections and the leadership falls backwards to prove its affinity to the Kashmir cause. The religious groups of Pakistan are trying to make a dent in the electoral politics of the State. Jihad against India, especially so In Kashmir, is an integral part of their mandate; it also cannot be forgotten that they have the tacit, covert support of the Army and the Inter Service Intelligence (ISI). Under the circumstances, any talk of normalcy or dialogue between the two nations or selling a positive outlook with regard to the security situation in the state amounts to living in a fool’s paradise. As of now there is no case to lower guard, there is no option but to go with the concerns raised by the Union Home Minister.