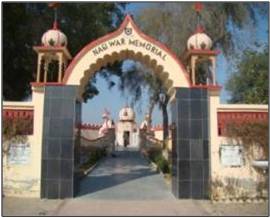 The youth of the country needs to be given a post-independence historical perspective to make them realise that the freedom that they are enjoying came with a price. Sacrifices did not end with the freedom struggle; they extended way beyond to save the territorial integrity, dignity, democratic values and freedom of the great Indian Nation. The new generation must derive motivation from the historic narratives and remain be prepared to make similar sacrifices in the future so that the nation emerges as strong and indomitable.

Towards this end, an initiative taken by the Army in the Fazilka-Abhor sector to commemorate the glorious battles in 1971 and the victory of the Indian army over deceitful forces deserves utmost admiration.

The Indo-Pakistan war of 1971 witnessed many battles where the Indian soldiers exhibited courage and fortitude in the face of great odds and came out victorious albeit after great sacrifice. Many Indian units and regiments took part in these battles – 4 Para, 3 Assam, 15 Rajput, 4 Jat and 18 Cavalry among others. These fighting arms were ably supported by artillery units, engineers and the services.

In December, 2014, the army organised a number of functions to commemorate all operation in the sector. The functions included a Saheedi Mela (Fair in memory of Martyrs) at the Asafwala war memorial which included a marathon. A presentation was made to a number of schools and universities in and around Fazilka portraying, in a pictorial manner, the gallant tales of the heroes of the war.

The youth of the area were overawed by the realisation that such a great war was fought by their army right next to their homes. A grand victory parade was organised by the civil administration and citizens of Fazilka on December, 15, 2014.

The local population and other dignitaries joined in great numbers and with great enthusiasm. Mr Surjit Kumar Jyani, Health Minister, Government of Punjab; Mr JTS Khurmi, Additional District and Sessions Judge, Fazilka and famous actor, Jimmy Shergill, were among those who participated.

The focus on the glorious Battle of Nagi merits special mention. Nagi is a tiny border village in Sri Ganganagar, Rajastan. Little is known about the famous battle that was fought in this area by the Indian army against Pakistani intruders on December, 27, 1971, ten days after a formal ceasefire between Indian and Pakistan has been declared.

Despite a decisive defeat in the hands of the Indian Army, Pakistan did not hesitate from taking a provocative recourse on the border in Rajastan. Troops of the Pakistan army occupied a high Sand Dune in village Nagi as a prelude to coming further into Indian territories.

4 Para of the Indian Army was tasked to evict the Pakistani troops from the Sand Dune and regain control of the area.

An attack was launched at 0400 hours on the dark, moonless night of 27/28 December by “C” Company of 4 Para under command of the Company Commander, Major VK Berry (who later retired as a Brigadier). No sooner did “C” Company start its approach to the Sand Dune it met with heavy and devastatingly accurate Artillery fire from the Pakistan side and heavy machine gun fire from the Sand Dune.

It became obvious that the Pakistan commanders had occupied the Sand Dune with a malevolent intent and were more than ready to counter any Indian attempt to regain the territory. They had an intention of embarrassing the Indian army and thus counter, to a small degree, the humiliation that they had suffered due to their ignominious defeat. They wanted to leave behind an impression that they had emerged victorious in the war at least in the western sector after having ceded the whole of East Pakistan.

The ferocity of the attack took the soldiers of 4 Para by surprise and they took a lot of casualties initially. The courageous soldiers, however, stood their ground.  Soon, 9 Para Field Regiment gave a befitting reply to the artillery barrage while 410 Field Company, Engineers worked in concert with the infantry to clear the minefield and obstacles laid by the enemy to fructify his evil designs.

The nefarious act of the Pakistan Army was put to naught by the brave action of soldiers of Indian Army who reclaimed the post. Despite all odds the Indian flag was hoisted on the Nagi Sand Dune on December, 28, 1971.

43 years hence, on 27/28 December, 2014, proud Indian veterans who had participated in the action, their relatives, serving soldiers and the local people stood on the Sand Dune and revisited the courage of those who fought for the glory of the nation. Major General TS Handa (Retired) of 4 Para, Colonel Ranjeet Singh of 9 Para Field Regiment and Lt Colonel Shailesh Bansal of 410 Field Company represented the units of the Parachute Brigade which had launched the operation. The war veterans who graced the occasion were felicitated by General Officer Commanding, Chetak Corps, Lt General PM Hariz.

A one week “Nagi Vijay Diwas” was held at Sri Ganganagar Military Station and Nagi village on December 27/28, 2014, to commemorate the great victory. Wreath laying ceremony was held at the Nagi war memorial, Shaurya Sthal, on December, 27, 2014. The monument is revered as a temple and shrine by the local community. In a unique gesture, soldiers of the Parachute regiment held a Para Motor display and while passing over the memorial by parachute showered rose petals on the sacred monument.  Before the wreath laying ceremony, lectures and presentations recounting the saga of the Battle of Nagi were organised in various local schools and universities.

It is hoped that the Indian army will take many more such initiatives that motivate historians, writers and columnists to record the great battles fought and won by the army since independence.