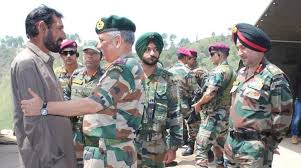 Wing Commander Abhinandan has been returned by Pakistan to India! There are divergent reasons being given for this decision by Pakistan but courtesy demands that we ignore the supposed ulterior motives and look for something positive in the development. It is a reason for celebration and also reason to acknowledge the release as a good gesture on the part of the Imran Khan, in accordance with international norms. It is notable here that the escalatory threshold between India and Pakistan (both nuclear powers) had reached critical levels in a manner that caused apprehensions of all out war under a nuclear cloud. Now, with the release of the pilot, attempts are on to bring down the tensions.

The release, however, has not had any impact on the situation along the Line of Control (LOC) and the hinterland in Jammu and Kashmir. Even as the return of the Wing Commander was underway, heavy firing was reported all along the LOC which has led to some civilian casualties. A massive counter-terrorist operation at Kupwara was also underway that witnessed the killing of two terrorists and also the unfortunate martyrdom of four security personnel and one civilian.

Cross LOC firing has been going on incessantly since the aerial attack by India on terrorist modules in Pakistani territory on February, 26, that led to the destruction of three terrorist camps. Pakistani troops have been firing their Mortars and Missiles from civilian houses, using villagers as human shields. The Indian Army, however, has been targeting the Pakistani posts away from civilian localities. Pakistan had also unsuccessfully attempted to enter Indian air space in the sector with its sophisticated F-16 aircraft but the attempt was thwarted by the Indian Air Force with destruction of one Pakistani aircraft.

The writing on the wall is very clear! No let down in the Pakistani involvement in Jammu and Kashmir can be expected despite the so-called “grand” gesture of returning Wing Commander Abhinandan. There may be some de-escalatory movement between the two countries at the national level but it is unlikely to impact the situation of conflict in Jammu and Kashmir.

The political development in the Kashmir region is also witnessing some paradigm shifts in policy. The crackdown on the Jamaat-e-islami leading to arrest of its members followed by its ban has raised the hackles of the political establishment in the valley. Hurriyat and even mainstream leaders have spoken against this action by the Union Government thus indicating creation of a fragile political situation.  There are rumours that the Hurriyat too may face a ban. The government may go in for simultaneous elections for the state as well as parliamentary constituencies. Conduct of elections in Kashmir is a challenging process and such a scale will add to the security and administrative burden.

The Indian Army is sensitive to the emerging challenges and it is for this reason that the senior commanders of the Northern Command are visiting and interacting with their troops regularly, while making on-ground assessments of the situation to ensure that the preparedness is in order. Even as the firing and from across the border was underway, the Army Commander of the Northern Command, Lt. Gen. Ranbir Singh, accompanied by the Corps Commander was visiting the forward posts in Poonch. He took a detailed briefing on the actions taken to meet the challenges of increased ceasefire violations through superior and aggressive domination of LOC by the troops, in accordance with the policy to giving a befitting reply to Pakistani transgressions.

While considering the root cause for the escalation of the situation to such dangerous levels as has been witnessed in the last few days, the finger points, first and foremost, towards the Pakistan Army. It is a sinister, ruthless demon that is out to devour all that comes its way in a devilish pursuit for power. The Pakistan army has long since shed tenets of honourable military norms and is quite content in converting poor, uneducated civilians of its country into cannon fodder, to be wasted without remorse in order to “bleed the Indian forces.”In this evil design it is being assisted by unscrupulous and mercenary warlords like Masood Azhar and Hafiz Saeed who run killing machines under its patronage.

Sadly, there are some in Kashmir who have also sold their soul to the devil and help in fructification of these evil designs. Young Kashmir boys are being indoctrinated and exploited to follow the self destructive path of terrorism by these elements. The recent crackdowns are a valiant attempt by the Government to check this malaise.

The Government of India should not reduce the pressure that has been built up against Pakistan and its proxies in Kashmir. To relent now would mean losing the initiative and the lost ground will be very difficult to cover in future. Pakistan simply has to be exposed for the evil that it perpetrates with impunity even as Kashmir is cleansed for its debilitating and destructive influence. The first step should be to put our own house in order for which action at the political and operational level is underway, simultaneously, there should be no let down in exposing Pakistan in front of the international community. Preparations for a military face-off should gain momentum while enhancing existing security protocols.

It needs to be understood that the enemy is equally determined to derail the political as well as the security threshold in its quest to keep the region on the boil. The situation requires enhanced vigilance and preparedness to meet unexpected challenges in the entire state of Jammu and Kashmir, especially the Kashmir valley. The security forces, led by the Indian Army, will have to usher peace and build an environment conducive for the conduct of free and fair elections, notwithstanding the attempts to derail the same.  It is quite apparent that the challenges to the security forces operating in the region, especially so the Northern Command of the Indian Army, have increased manifold.

(Jaibans Singh is a reputed expert in security affairs, author and columnist)