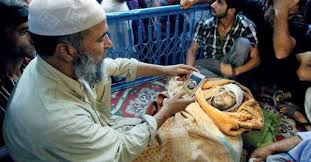 Last year, the death anniversary of the terrorist Burhan Wani, who was eliminated by the security forces on 8, July, 2016, witnessed a lot of activity! Pakistan added it to the other many “Black Days” that it has devised to keep the Kashmir issue in public eye through the year. Not to be left behind, Syed Sallahuddin, the prime Kashmiri servant of the Pakistani regime, at the behest of his Inter Service Intelligence (ISI) masters, came up with a one week long programme of disruption in Kashmir which he has named as Hafta-e-Shuhuda (martyrs’ week). The separatist conglomerate All Party Hurriyat Conference (Hurriyat) gave the customary call for a Bandh (Lock out) and Hartal (Strike) which, considering the frequency of such calls, was nothing more than a routine affair.

The aforementioned fan club of Burhan Wani seems to be considerably quiet this year. Is it because of the realisation that the propaganda blitzkrieg of last year made the slain terrorist a bigger entity than them all? Are they scared of losing their own relevance while attempting to eulogise him?

It could also be because the new lot of terrorists, who have taken the mantle of Burhan Wani, want their own place under the sun, which is not possible until the ghost to their late icon and role model is not laid to rest.

This is the value being put on the so-called sacrifice being made by so-called martyr of the so-called Kashmir cause by those who egged him on simply to keep an evil agenda alive. It brings about the realisation that the young boys who join the cult of terrorism with ideological stars in their eyes are no more than disposable napkins for the perpetrators of terror sitting in Pakistan.

Burhan Wani was neither a committed nor a well trained terrorist.  His claim to fame emerged from his presence in the social media, especially Face book, where his persona was built with a fair degree of romanticism. The disruptive elements and terror mongers sitting within Kashmir and in Pakistan did not take long to assimilate the rock star like potential of Burhan Wani and went all out to exploit it to the hilt.

“Putting a photo in the social media is the last thing that a professional insurgent or a terrorist would do, the young boy was misled into taking action that led to his death,” adds Dr. Kahlon for good measure.

The terror mongers and planners sitting across the border have great experience in both running of a terror machinery and its associated propaganda campaign. They made use of the good looks of Burhan Wani, the disruptive combat fatigues that he wore, along with the automatic rifle that he held, to project him as a poster boy of the so-called Jihad in Kashmir. While exploiting his unique talents they were also aware that, given his low level of training, it was simply a matter of time before he would be eliminated. They planned to get propaganda advantage from his life as well as his death. The script played out exactly as it was designed.

Something odd that strikes out is that Burhan Wani was eliminated sooner than expected. This gives an impression that his early death was desired by somebody within his set up. It seems that he had reached a stage where he was more valuable dead than alive.

The manner in which Burhan Wani has been used and then consigned to the dust is something that the youth of Kashmir should reflect upon. Is resort to terrorism the right method for expressing a political aspiration?  Would it not be better to opt for other peaceful and civilised options of discussion and dialogue?

India is a vibrant democracy, acknowledged as such by the whole world. Here all kinds of ideologies are given space for articulation. If the youth of Kashmir have something to say, they can very well do so without resorting to self defeating violence.  Their voice will be listened to and their views respected.

The government needs to launch a strong information campaign to counter the evil propaganda. The people, especially from a rural areas and a poor background, have to be informed and educated about the enemy design and told the consequences of their boys following a wrong path.

The youth have to be approached directly and dissuaded through counseling. They should be made to understand that they stand no chance in the face of the better trained personnel of the security forces. By taking the course of the gun they are ensuring their elimination for no purpose whatsoever. If they wish to do something for their people they need to stay alive. It is very important for the government to ensure gainful employment for the youth which would nip the problem in the bud in no time. A lot has been done in this regard but more is needed to create the desired impact

Media is a very important means for dealing with foreign sponsored propaganda. It is important for media to highlight the dangerous design of the enemy in creating the likes of Burhan Wani. It should expose the misinformation being spread and highlight the actual situation.

Burhan Wani represents all that the Kashmir youth should not be, this message needs to be given out loud and clear in order to save a generation from following a path of self destruction.

(Jaibans Singh is a reputed expert on Kashmir Affairs, an author and a speaker)